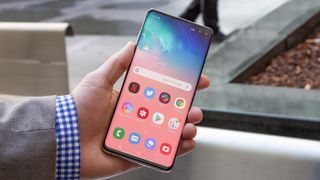 Now that the next-gen Galaxy S20 has been partially ousted, we're seeing an uptick in Galaxy S10 deals and Galaxy S10 Plus deals.

Despite its age, the Galaxy S10 is still among the best phones you can buy. It's also among the best Android phones in the industry. And with Samsung's Feb. 11 Unpacked event inching closer, Galaxy S10 deals will only get better.

The Galaxy S10e packs everything we love about Samsung's other Galaxy phones in a smaller package. However, it packs many of the same aesthetics. The only major difference in design is that the S10e packs a mounter fingerprint sensor on the side rather than in-display.

The phone's 5.8-inch AMOLED display isn't as sharp as the QHD screens on its larger siblings, but its still impressive and covers 148% of the sRGB space. That's ahead of the iPhone XS' 123%.

In terms of deals, the S10e has seen all sorts of discounts dropping to an all-time low of $549 unlocked via Amazon. We've also seen it bundled with a free Samsung Chromebook 3 or as part of a BOGO sale via select carriers like Verizon.

One of the best Android phones around

The Galaxy S10 comes in a variety of colors that includes White, Black, Flamingo Pink, and Prism Blue. The 6.1-inch Galaxy S10 has the same dimensions as Apple's  $749 iPhone XR. However, the S10 is a full ounce lighter than Apple's previous-gen budget phone.

In terms of deals, unlocked Galaxy S10 models have sold for as little as $599 on Amazon. Carriers have also offered plenty of BOGO deals on the S10.

The 6.4-inch Galaxy S10 Plus builds on the S10's greatness by adding better camera performance and longer battery life. You also have the option of getting 1TB of storage or 12GB of RAM.

Otherwise, the S10 and S10 Plus pack the same hardware, so performance is very similar between both models. However, the Infinity-O display on the Galaxy S10 Plus truly goes from edge to edge. With the exception of a narrow chin on the bottom, the S10 Plus has virtually no bezels.

The ultrasonic fingerprint sensor on the Galaxy S10 Plus is embedded into the display and is easy to set up and use. Unlike Apple's Face ID, you don’t have to stare at your phone and swipe up to unlock the device. Just hold your finger on the designated area of the screen and you're in.

Price-wise, the unlockled S10 Plus has dropped as low as $699 on Amazon. That's $300 off and the best price we've seen for this smartphone.