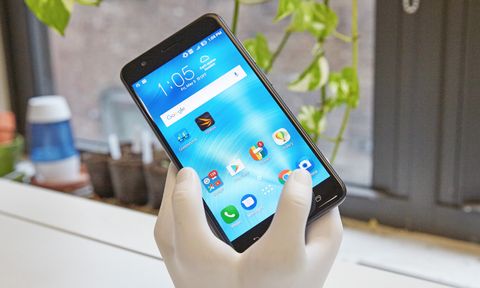 With sharp dual rear cameras, a 2.3x optical zoom and the best battery life ever, Asus' ZenFone 3 Zoom is a great pick for an affordable price.

What started out as a trend is quickly becoming a standard feature. Like other phones, Asus’ $329 ZenFone 3 Zoom features dual rear cameras, but the company’s new handset takes things further, quite literally, with a 2.3x optical zoom — an even longer zoom than the one the iPhone 7 Plus.

However, the ZenFone 3 Zoom is much more than a pair of fancy shooters; it also packs a vibrant 5.5-inch full-HD AMOLED screen and a massive 5,000-mAh battery that results in the longest battery life we've ever seen. Despite those accolades, however, the ZenFone 3 Zoom’s  performance is closer to that of budget handsets than its price tag might suggest, and it runs an 18-month-old version of Android. Nonetheless, there's still an awful lot to like about the ZenFone 3 Zoom.

UPDATE: As of June 27, there is an over-the-air update for ZenFone 3 Zoom that includes an update to Android 7 Nougat.

Featuring a mostly metal design in a handful of colors (pink, silver and navy blue), the ZenFone 3 Zoom doesn't look out of place even when it's up against significantly more expensive phones. Like any good phone in 2017, the ZenFone 3 Zoom includes a USB Type-C port on the bottom, along with a handy headphone jack and a conveniently located fingerprint sensor around back.

A closer examination of the ZenFone 3 Zoom's back reveals plastic end caps on the top and the bottom. Thanks to a range of dark blues on the back of our review unit, those end caps blend right in. One downside is that the 2.5D glass on the ZenFone 3 Zoom’s display doesn't feel anything like the smooth, rounded edges you get on an iPhone 7 or Galaxy S8.

Display: A kaleidoscope of colors

While AMOLED screens used to be exclusive to expensive flagship phones, recent price drops have made it possible to get these displays on more affordable handsets. And that's great, because the ZenFone 3 Zoom's 5.5-inch screen is a glass canvas for bright, saturated colors. The bold neon-blue lighting and hazy orange fog in the Blade Runner 2049 teaser made a bigger impact than it ever could have on a traditional LCD screen.

Additionally, with a color range that covered 219.6 percent of the sRGB spectrum, the ZenFone 3 Zoom's screen is even more colorful than the one on the OnePlus 3T, which was slightly more limited, at 189 percent. But the real eye-opener is evident when you compare the ZenFone to a phone with an LCD screen, such as the Moto G5 Plus, which covers just 106 percent of the sRGB spectrum. That’s not even in the same league.

When it comes to peak brightness, though, the ZenFone 3 Zoom's 421-nit screen fell behind the 591 nits we got from the Moto G5 Plus. Considering that other similarly priced phones — including the ZTE Blade V8 Pro (430 nits) and the Honor 8 (410 nits) — offer roughly the same brightness as the ZenFone, it isn’t much of a flaw.

With a Delta-E rating of 2.31 (closer to zero is better), the ZenFone 3 Zoom's color accuracy compares pretty favorably to the 4.29 smartphone average. And if you are looking to adjust the color temperature on the ZenFone's display even further, you can use the adjustable slider and additional display settings settings for custom, standard (basic sRGB) and blue-light filter modes.

Cameras: Optical zoom without the bulk

Asus' use of dual rear cameras on the ZenFone 3 Zoom is a great example of how advances in tech can make gadgets better and easier to use. Instead of using a big, bulky camera module that mimics the lenses on traditional cameras, as on the original ZenFone Zoom, the ZenFone 3 Zoom has been upgraded with dual 12-megapixel cameras that can achieve similar, if not better, results — without a big camera hump.

Asus also went the extra mile to address the inaccurate white balance I encountered on the original ZenFone Zoom by fitting the ZenFone 3 Zoom with a dedicated color-correction sensor to help ensure your photos sport spot-on hues and shades.

In a side-by-side photo comparison of some flowers, the ZenFone 3 Zoom easily outshot the Moto G5 Plus by capturing much sharper details on the center flower's petals and significantly richer yellows and greens.

In fact, even when compared to a shot taken by the iPhone 7 Plus — a handset that costs more than twice as much — the photo from the ZenFone 3 Zoom held its ground well.

However, when I stepped back to capture a wider scene of a nearby sitting area, the ZenFone Zoom didn't reach quite the same level of dominance, as the Moto G5 Plus' pic came out slightly sharper. However, the ZenFone 3 Zoom's shot captured richer and more accurate colors.

At night, the ZenFone 3 Zoom pulled ahead again with a photo that was noticeably sharper and less noisy than the G5 Plus' photo. The ZenFone 3 Zoom pic even had better dynamic range, as evidenced by increased details in the shadows and less-blown-out highlights around the various lights.

The ZenFone's zoom capabilities are impressive, even compared to the iPhone 7 Plus.

With a 2.3x optical zoom, the ZenFone has a slightly longer reach than the iPhone 7 Plus' 2x optical zoom. Both phones also capture a similar amount of detail when pushed in, although, if you zoom in to 100 percent, you can see that the iPhone still has a slight advantage in sharpness.

Things go south for the ZenFone with its exposure. A photo of the Statue of Liberty at 2.3x zoom came out way too dark. Even so, from more than 2 miles away, the ZenFone 3 Zoom’s optical zoom lets you capture photos that most other camera phones couldn't even dream of shooting.

The ZenFone 3 Zoom's cameras do have some quirks. I love the one-touch zoom controls that Asus borrowed from Apple as well as the phone’s built-in, full-featured pro mode, but the four-axis optical image stabilization on the ZenFone’s rear cams leaves something to be desired. When you’re trying to compose a shot, stabilization lags, which causes the scene in the viewfinder to swim and shift around for a few seconds after you stop moving your hands.

Packing a Qualcomm Snapdragon 625 CPU, 3GB of RAM, 32GB of storage and a handy dual-card SIM tray with microSD expansion, the ZenFone 3 Zoom's performance has more in common with less-expensive budget handsets such as the Moto G5 Plus than with pricier midrange phones such as the OnePlus 3T. But don't take that as a knock against Asus’ phone, because the ZenFone 3 Zoom is still more than fast enough during everyday use. Plus, Asus' use of a power-sipping processor reaps tons of benefits in the battery-life department.

On Geekbench 4, which measures overall system performance, the ZenFone 3 Zoom (4,193) performed slightly better than the Moto G5 Plus (3,746), even though both phones sport the same Snapdragon 625 chip. However, when compared to a more expensive midrange phone, like the $439 OnePlus 3T, which packs the Snapdragon 821 chip, the 3T scored significantly higher, at 4,556.

This pattern continued when we tested web performance by running the JetStream 1.1 JavaScript benchmark. With a score of 29.75, the ZenFone 3 Zoom was very close to the Moto G5 Plus' score of 30.3, while the OnePlus 3 scored significantly higher, with a mark of 61.25.

By combining an energy-efficient Snapdragon 625 chip with a monstrous 5,000-mAh battery, the ZenFone 3 Zoom's battery life is so good, it seems like a prank. On the Tom's Guide Battery Test (continuous web surfing on T-Mobile's 4G LTE network), the ZenFone 3 Zoom lasted almost 17 hours, with a time of 16:49.

That runtime absolutely crushes those of competing budget handsets, such as the Moto G5 Plus (11:31) and the ZTE Blade V8 Pro (12:08) —  and those phones aren’t exactly slouches in the battery department.

In fact, the ZenFone 3 Zoom's battery life is long enough to catapult it to the No. 1 spot on our longest-lasting phones page, knocking the Moto Z Play down to second after it spent almost a full year on top.

Just know that because the ZenFone 3 Zoom's reverse charging is limited to 1 amp, it might not send power as quickly as a real battery pack. Oh, and you'll probably need to buy another cable, since the one that comes in the box is a USB Type-A to USB Type-C cord, which won't help you charge another phone or accessories such as a pair of wireless earbuds.

Software: Clean, but outdated (for now)

In the past, Asus phones have often come riddled with bloatware, but the ZenFone 3 Zoom is like a breath of fresh air. Sure, there's a handful of preinstalled Asus utilities, but many of them, like the file manager app and FM radio app, can be pretty handy. And none of the apps are as annoying or offensive as the junk that shipped on last year's model.

The bigger issue is that the ZenFone 3 Zoom runs Android 6.0 Marshmallow, more than eight months after Google released Android 7.0 Nougat. On top of that, the ZenFone 3 Zoom's UI skin looks chunky, thanks to oversize menus and buttons, which makes navigating among various menus and apps feel more cumbersome than it should.

Thankfully, Asus says an update for Android 7.0 should be available soon, which makes the ZenFone 3 Zoom's outdated OS a mere annoyance instead of a deal breaker.

The Asus ZenFone 3 Zoom is a really interesting phone. Its performance is similar to that of less-expensive budget phones, its display is on a par with those of handsets costing hundreds more, and it has  dual rear cameras with OIS and a 2.3x optical zoom. But the ZenFone 3 Zoom's best feature isn't even the camera; it's the phone's epic battery life. I just wish this phone's software and interface were more up-to-date, both in terms of design and version number.

Although more expensive midrange phones, like the OnePlus 3T, offer a more luxurious design and much better performance, if you're looking for a reasonably priced phone with a camera that's considerably better than what even the best budget phones offer, the Asus ZenFone 3 Zoom is a very enticing device.