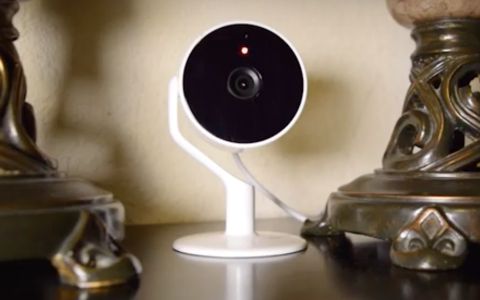 The eco4life security camera is inexpensive, and its video quality is good. However, the app has too few features.

Aluratek's eco4life Wi-Fi security camera might be tempting, because it's inexpensive ($39.99 on Amazon) and the video quality is generally good.

However, we can't recommend it. The app is threadbare, with few functions. But our biggest concern with the eco4life is how poorly it handles a security camera's primary function: letting you view and save videos of specific incidents. If you're looking for a sub-$100 security camera, check out the Ezviz Mini O 1080p instead.

The eco4life camera is a small, hockey-puck-shaped, white disk that's 2.1 inches in diameter and 1.2 inches deep. When attached to its stand, the whole setup is 4.3 inches tall. The circular base has a diameter of about 2.25 inches.

The camera connects to its stand via a tiny, flimsy magnet that falls out of alignment easily. As a result, the device inadvertently shot many of my videos at an angle. When I moved the camera even slightly, it inevitably fell off the stand.

The lens is located at the center of the glossy black faceplate, while the single infrared LED (for night vision) and the microphone are above the lens. The speaker is on the back of the camera.

The short power cord (only 39 inches) plugs into a mini USB port on the camera's back and into a conveniently narrow power adapter that won't obscure adjacent outlets. The microSD card slot is very accessible on the side of the camera.

Eco4life uses WPA-PSK/WPA2-PSK security when connecting to a Wi-Fi network.

The eco4life captures 1080p video with a one-third-inch, 2MP CMOS sensor and a glass lens with an 85-degree field of view.

My test recordings of daylight video were good. Colors were true, and contrast and exposure were on target. Though the videos weren't sharp and fine details were blurred, they had more than enough detail for someone to ID a potential intruder.

Night vision video had low contrast, and there was a bit of a sepia tint. However, facial details were adequate for identification, and motion blur was at a minimum.

The half-duplex two-way audio was generally good. When listening to a live feed from the camera or playback from my phone, the sound was clear and loud, though the live feed had occasional dropouts. However, when talking through the phone to the camera, audio was much softer, and the listener needed to be within about 8 feet of the camera to fully understand what I was saying.

The eco4life has minimal motion-detection options. You can turn this function on or off. If it's on, you can set the sensitivity to Low, Medium or High. When the camera detects motion and you have the app open on your Android phone, your smartphone will blare out an alarm (and an annoying one at that). Unfortunately, you can't silence the alarm without turning off motion detection.

You can also receive push notifications on your phone whenever the camera detects motion. However, the option to activate this feature is inconveniently located in a separate area of the app from the motion-detection settings.

Aluratek doesn't offer cloud storage for this camera, relying instead on a mini SD memory card for local storage. (The card is not included.) A spokesperson said that this model is for customers who don't want cloud storage. The company is planning to release a different model, which will support cloud storage. (The EZViz Mini O 1080p offers both options.)

The primary purpose of any security camera is to provide recordings of events when it detects motion. Unfortunately, the eco4life app's handling of recordings is cumbersome, making viewing or saving event videos very difficult. For instance, when you receive a push notification about an event, tapping on it takes you to the app's home page rather than to the relevant section of the timeline or the live view.

The Playback screen displays a continuous timeline with no indication of when it detected motion and no option to change the scale of the timeline. The only way to find an event is to choose the date you want to view, then scroll through the entire timeline until you find the one you need.

To make matters worse, the time indicators are an illegible dark gray against a black background. Once you've located the relevant video segment — a tedious process — the only way to save it is to press the Record button while the timeline scrolls through that portion. That will save the file to your phone's photo album.

Setting the SD card to record only when motion is detected rather than performing continuous recording (an option available only on Android devices) doesn't fix the situation. It has no effect on how the app captures video. Nor is it possible to just pop the memory card into a computer card reader, since the video file is a proprietary format and no outside computer can read it.

The Message Center, which holds all the push notifications the app has sent to your phone, displays still screen captures of the moment that triggered a given event. However, on Android devices, it can take an extremely long time (more than 25 minutes in my tests) for any of the thumbnails to appear after you've opened the screen. On my iPhone, they displayed almost immediately. Tapping on a thumbnail displays a full-screen picture, and that's all. It doesn't take you to the relevant section of the timeline.

Strangely, even when I received a push notification and the Message Center displayed the thumbnail of an event, the timeline didn't always record the event.

The eco4life app works on Android 4.1 or later and iOS 8.0 or later. No web portal is available. In some instances, I found the app more responsive and reliable on the iPhone than on an Android phone.

The interface is simple, because it has few options. Even so, settings for the key functions (Motion Detection settings, the Message Center and Push Notification) are scattered across various screens.

In the Live View area, you'll find icons for capturing a screenshot or recording video, activating two-way audio, going to the Playback screen or adjusting the Motion Detection settings. You can also turn audio on or off and choose between high- or standard-quality video.

The app doesn't have an option to save videos. Instead, you use a Record button to capture a video from the event videos. For that reason, any video you may want to archive outside the app will be of poorer quality than what you see within the app. In my tests on both an iPhone and an Android phone, the Record function failed to capture the audio from the event video.

In the Playback screen, you can change the date to view a video, record a segment of video, take a snapshot, and turn audio on or off.

Neither the Live View nor Playback have auto-rotate enabled. Instead, you tap an icon for full-screen mode.

Periodically, during my tests, the Android app would become unresponsive. In addition to frequently losing connection to the camera, when I first opened up the app, it sometimes took several minutes before the live stream, timeline playback or Message Center displayed any visuals. At one point, I waited more than 25 minutes for some (but not all) of my Message Center thumbnails to display. Strangely, even when the app was unable to display the live stream, the camera continued to send motion-detection push notifications to the phone. We contacted the company about the issues we had and will update this review once we hear back.

Even though it's only $49.99, the eco4life security camera isn't a bargain. While the video is generally good, the app is very limited, and the camera fails at its most important function: providing easy access to videos of security incidents and letting you archive those videos.

If you're looking for a budget security camera, we recommend spending just a bit more for the Ezviz Mini O 1080p ($59.99), which has far more features (including scheduling and motion zones). And the Ezviz's library of incident videos makes it very easy to see any problems, then save videos of those issues for future reference.