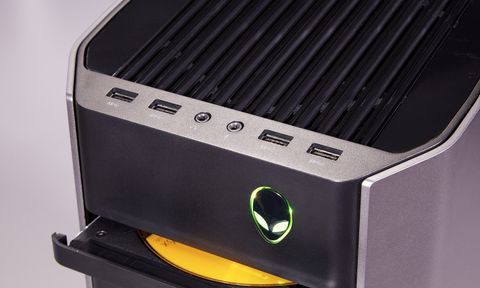 Buy the Alienware Aurora R5 if you want a powerful gaming PC that you can upgrade without busting out a screwdriver.

Upgradability is one of the biggest benefits of having a gaming desktop, but it can also be awfully intimidating. For nontechy gaming-PC newbies (or just folks who are not handy with tools), what good is being able to upgrade your graphics card if you have to bust out a tool kit every time you want to do so? That's a concern that Alienware's new Aurora tackles head-on, with spectacular results.

With its smartly constructed chassis, the Aurora ($799 starting; $2,554 as reviewed) not only lets you access components quickly but also allows you to swap out graphics cards and storage drives without touching a single screw. It's also just a great gaming machine, touting Alienware's signature design charm as well as support for fast Core i7 processors and the latest Nvidia GTX 1080 graphics card. These features combine to make this desktop an excellent starting point for new PC gamers while also being versatile enough for veterans.

Depending on your taste, the Alienware Aurora either looks like a really slick gaming PC or an advanced humidifier from another planet. But regardless, the moment you push in the tiny alien head on the front and watch the PC illuminate like some extraterrestrial artifact, there's no mistaking that this is an Alienware machine.

With big, gray side panels sandwiching its black, heavily ventilated center, the Aurora looks like a shrunk-down version of Alienware's beastly Area 51 tower. It also borrows one of its big brother's best features: the handles. Thanks to the Aurora's grips on the top and bottom, I found it was pretty manageable to lug around the 32.7-pound machine.

At 18.6 x 14.1 x 8.3 inches, the Aurora should fit just fine under or on top of your desk. Consider it the middle child of the Alienware family — it won't slide under your TV as the X51 will, but it won't engulf your command center as the Area 51 does, either.

Customization: Light It Up

As with any Alienware machine, the Aurora's lights can be customized to glow in all kinds of cool color combinations. Using the Alienware Command Center app, you can select individual colors for the machine's alien-head power button as well as the three strips of light on the side panels, or choose from presets such as the all-green Alien Blood or the orange, red and yellow Flame.

It's painlessly easy and pretty fun to customize the Aurora's lights and make your own presets; I ended up making a sweet-looking green-and-pink combination that complemented the barely visible glow of the GeForce graphics card inside. The desktop's lighting is fairly subtle by gaming desktop standards, but if you're tired of towers that look like miniature nightclubs, that might be a good thing.

Aesthetic customization isn't the only thing the Command Center offers; you can also use the app to monitor and adjust the PC's fans. The AlienFusion tool lets you tweak all types of power- and energy-saving options, while the AlienAdrenaline feature lets you create custom Game Modes that automatically load up specific lighting settings and trigger additional apps when you launch your favorite title.

If you're terrified at the thought of busting out a screwdriver to upgrade your PC, the Aurora is made specifically for you. Alienware's new PC is one of the most painlessly upgradable gaming desktops I've ever used, with a simple and clever set of mechanisms that let you access and swap out parts without requiring any tools.

After I pulled a latch on the Aurora's backside, the side panel popped right off. This is a common enough feature on modern gaming PCs, but what I discovered next certainly wasn't. The Aurora's graphics card is held in place by a swinging power-supply mechanism — once I flipped a few lock switches, I was able to rotate the power supply and pop out the graphics card and hard drive without messing with a single screw.

I've encountered plenty of PCs that make getting to the graphics card easy but none that make swapping it out so effortless. This means that even the clumsiest or most tech-averse Aurora owners can purchase that shiny new GPU without freaking out over how to install it.

The Aurora R5 has more than enough inputs for your controllers, mice, keyboard and monitors. Located conveniently at the PC's top edge are four USB 3.0 ports, headphone and mic jacks, and a DVD-RW disc drive.

In the back, you'll find six USB 2.0 ports, three USB 3.0 ports, a USB 3.1 port and a USB Type-C port, the latter of which is becoming virtually ubiquitous on all types of modern PCs. You'll also find an Ethernet jack, two S/PDIF digital output ports and a full suite of 7.1 surround sound inputs. The desktop's GTX 1080 card packs three DisplayPorts as well as an HDMI port, leaving plenty of room for multiple monitors.

I expected great performance from our GeForce GTX 1080-packed Aurora, and I was not disappointed. Sneaking through a snowy Russian compound in Rise of the Tomb Raider was a joy on Alienware's PC, which effortlessly rendered Lara Croft's snow-speckled hair at 4K while allowing me to take out enemy guards at a swift 45 frames per second. The game still looked great when I lowered the resolution to 2560 x 1600, and ran at an even better 60 fps. When we ran the Metro: Last Light benchmark at 4K on low settings, the Aurora turned in an impressive 114.67 fps.

The Aurora's Core i7 processor and GTX 1080 GPU make it a natural fit for VR, but I ran it through a few tests to be sure. The desktop passed the Oculus Rift Compatibility Tool, which scans your PC to ensure you have the CPU, GPU, RAM, operating system and ports necessary for high-end virtual reality.

Alienware's PC exhibited flying colors on the more intensive SteamVR Performance Test, which runs a brief Portal-themed demo and rates your system's frame rate and graphical fidelity. The Aurora fell as far into the "Ready" bracket as possible, with an average quality rating of 11. To put that score into perspective, entry-level VR systems such as the Alienware X51 and the Asus ROG G20CB (both of which have GTX 970 graphics) scored closer to 6.

Thanks to its Intel Core i7-6700K processor and 16GB of RAM, our Aurora proved to be just as good at juggling tasks as it was at playing visually demanding games. The system ran smoothly and stayed quiet, even as I hopped between five Twitch streams, downloaded a game and ran a full system scan all at once. I then proceeded to play some Rise of the Tomb Raider while recording my session using Nvidia's ShadowPlay, which ran without a hitch in the background without slowing down my game.

The Aurora's $799 starting configuration is ideal for those who want just enough power to play modern games at decent settings: It offers an Intel Core i3-6100 processor, 8GB of RAM, a 1TB hard drive and Nvidia GTX 950 graphics. The $1,099 model is your cheapest VR-ready option, packing a faster Core-i5-6400 CPU as well as an Nvidia GTX 970 GPU.

When stacked up against Alienware's full lineup of gaming PCs, everything about the Aurora feels just right. The company's living-room-ready X51 lacks powerful GPU options, while the highest-end Area 51 offers all of the graphics muscle you could want at the expense of just about all of your desk space. Meanwhile, the Aurora packs everything you need for 4K and VR gaming in a decent-size chassis that you can easily upgrade as you see fit.

Pricier competitors, such as the Digital Storm Bolt 3 and the Maingear Drift, are sleeker and offer more customization options, but they lack the subtle design touches (handles, easy-open panels) that make the Aurora such an inviting machine. Overall, Alienware's latest desktop is an excellent gateway drug to PC gaming that you'll still find useful once you've become a full-on enthusiast.