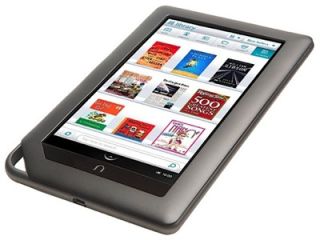 Last Friday, we caught wind of a little B&N project called the Nook Tablet. With twice the RAM and twice the storage space of its competitor, Amazon's Kindle Fire, internal documents from Barnes & Noble state quite simply that it is 'better than the Kindle Fire.' The price for this dual-core device is said to be $249. However, as eagle-eyed readers will note, this is the same as the price for the Nook Color. Not surprising, then, that last week's rumors also contained talk of a Nook Color price drop that would see the ereader drop to an attractive $199.

This past weekend, the Nook Color price-drop rumors came to fruition. Engadget reports that, though the Nook Color is still selling for $249 on Barnes & Noble's website, Best Buy on Saturday dropped the price by $50, bringing the tag down to $199. We're sure other retailers will follow suit once B&N makes the Nook Tablet official, but if you can't wait to get your hands on the Nook Color, Best Buy has got you covered.

For those unaware, the Nook Color boasts a 7-inch VividView color touchscreen, 8GB of storage as standard (up to 32GB via MicroSD), WiFi, support for Flash, AAC, MP3, MP4, EPUB (including Non or Adobe DRM), PDF, XLS, DOC, PPT, PPS, TXT, DOCM, XLSM, PPTM, PPSX, PPSM, DOCX, XLX, PPTX, PG, GIF, PNG, and BMP. The as-yet-unannounced Nook Tablet is said to have the same 7-inch VividView touchscreen, a dual-core Texas Instruments OMAP4 CPU, 1GB of RAM, 16GB of storage (expandable up to 32GB), and a battery capable of four hours of playback with WiFi on or eight hours with Wi-Fi off.

Stay tuned for news on the Nook Tablet, we'll keep you posted!