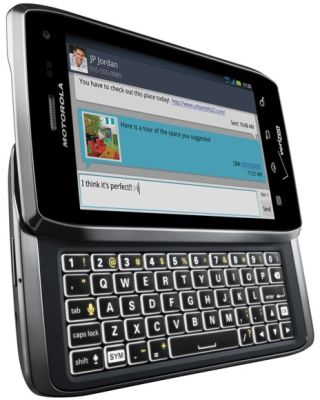 Droid Life reports that the fourth-generation Motorola Droid smartphone will arrive at Verizon next week.

The device was supposedly slated for a December 22, 2011 release, but given Verizon's robust launch schedule around the holidays, both Motorola and the Big Red reportedly decided to push its launch until after CES 2012.

The phone was then rescheduled for a February 2, 2012 launch, but so far Verizon hadn't officially announced it's release. Given it usually does so a week in advance, a new report claims the launch was pushed back yet again for a February 9 release, still keeping in line with Verizon's typical Thursday release schedule despite the prior delays.

As reported last week, the latest minimum advertised price (MAP) list from Verizon revealed the Droid 4 with a $199.99 USD pricetag after signing a two-year contract, just $50 down from the previous MAP listing. The device will also sell for $100 less than the Motorola Droid Razr Maxx which was just unleashed on Verizon's network on January 26.

Motorola has created its coolest Droid (vanilla) smartphone thus far, packing a roomy 5-row keyboard while measuring just half an inch thick. Under the 4-inch qHD TFT display will be a 1.2 GHz dual-core OMAP 4430 SoC from Texas Instruments, 1 GB of RAM, 16 GB of internal storage, and support for up to 32 GB of extra storage via microSD.

Also on the Droid 4's hardware list will be an 8MP rear-facing camera with 1080p HD video capture, 4G LTE, a 1785 mAh battery, hotspot capabilities, and Android 2.3.5 "Gingerbread," with a 4.0 "Ice Cream Sandwich" update on the way. The display will be protected by scratch and scrape resistant glass, and the phone itself will feature a water-repellent nanocoating for splash resistance.