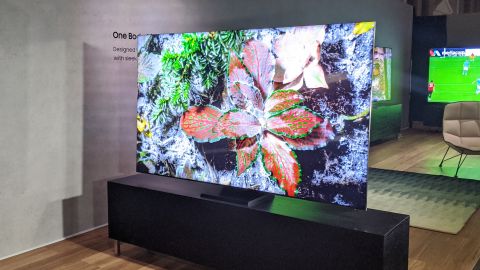 The Samsung Q950 8K QLED TV proves that sound might be the killer feature for 8K TVs, with a slick design that hides six potent speakers in its slim, barely-there bezels.

Samsung has dominated the 8K conversation since it debuted the first commercially available AK sets back in 2018, but at Samsung First look event leading in to CES 2020, the biggest changes to 8K aren't merely higher resolution, but the design and sound that a company the 8K screens.

The flagship of Samsung's 2020 8K lineup is the Q950, a large screen q lead TV that sports a new refined style and an innovative speaker system for more immersive sound. we had the chance to get up close and personal with the new 8K TV at Samsung's first look event, and we seriously liked what we saw and heard.

Samsung is promising that the Q950 will arrive sometime in 2020, but specifics about when it will come to market or how much it will cost have not yet been announced. Whenever it makes it to stores, the Q950 will be offered in several sizes ranging from 65 to 85 inches.

Even before you see the 8K picture, the Q950 grabs your attention with a striking new look. The the new design utilizes Samsung's almost bezel-less frameless panel technology to change the screen to body ratio to nearly 99%, resulting in bezels that can barely be seen at standard viewing distances.

When combined with a tasteful stand, the result is a gorgeous picture that appears to hang in the air free from any surrounding structure. The bezel-less look approaches the platonic ideal of TV design where anyone viewing the TV will see nothing but screen.

The perhaps more important than the design and how it presents the display is how the Q950 sounds. The TV boasts a new speaker design that places multiple speakers behind and around the display, part of system Samsung calls Object Tracking Sound+. This multi-speaker array is paired with advanced audio processing to provide a more immersive audio environment using multiple speakers to place sound -- what is often called audio objects -- in relation to objects on the screen. The result is audio that moves from left to right as actors speak lines while moving across the screen, or sound effects tracking with objects but they're zooming by, crashing down, or rising up. The TV features a six-speaker array that allows audio to track right and left or up and down, and combinations of the two.

And what's most impressive is this design manages to incorporate these several speakers in a slimmer bezel than ever before. In fact, part of the TV's chassis includes side mounted speakers indicated by telltale speaker grills built into the TV chassis alongside the screen.

Additional exposed speakers can be seen on the back of the set, and downward firing speakers situated behind and below reflect sound down and out toward the viewer.

The result is dramatic, providing rich and immersive sound pointed toward the viewer, with no visible speakers as you watch the screen.

This technology is extremely similar to Sony's Acoustic Multi-Audio technology (which we heard in our review of the Sony X950G Android TV), which used a four-speaker array to similar effect. However, the inclusion of additional speakers, and the elegance of the design in hiding these speakers pushes the multi-speaker technology further than we've ever seen on a consumer TV.

To offer a better sound experience when using a soundbar, Samsung has also created a technology called Q-Symphony, which utilizes both the sound bar and the TV's built in speakers to create a more dynamic listening experience with more speakers for greater volume and audio control.

Samsung manages to fit all of this audio visual buffet into a surprisingly compact space, with the Q950 measuring only 15 millimeters thick, with a design that can be used on a stand, or hung flush against a wall.

Aside from the design and the new sound system, Samsung is also touting the Q950's 8K credentials. All of the 8K sets announced for 2020 need the requirements for the 8K associations certified test specifications and bear the CTA's 8K ultra HD logo, a move that signals a minor conflict between Samsung and LG around the definition of 8K displays.

All said, Samsung's Q950 offers a fantastic picture, with quantum dot enhancement using Samsung's QLED technology to boost color quality and brightness, along with adaptive video processing that tailors HDR capability and overall brightness to both the ambient brightness of the room, and the content of the media. All of this AI-based video enhancement is handled by Samsung's Quantum Processor 8K, which Samsung boasts offers pixel level analysis of every frame of every piece of video put on screen.