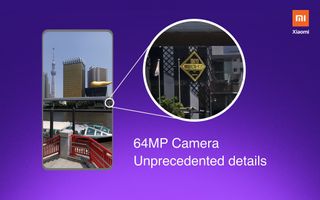 Debuting in India, the phone will roll out to other regions over time. Samsung's GW-1 is the only smartphone sensor in the market capable of processing the level of detail of a 64-megapixel capture and will be implemented into the new device.

The GW-1 CMOS sensor squeezes plenty of power into a large 1/1.7 inch sensor, enabling the same 0.8 micron pixel size as 48MP sensors. Offering HDR support for up to 100 decibels, this blows away modern HDR sensor capabilities which top out at around 60 decibels. Richer HDR snaps, larger image sizes and more vibrant detail are only just some of the features we can expect to see with this resolution bump.

Closing out the presentation with a bang, Xiaomi teased a 108MP equipped camera for its Mi phone product line. Set to produce images with a resolution of 12,032 x 9,024 pixels, the upcoming Mi phone will serve as Samsung's debut to devices over 100 megapixels.