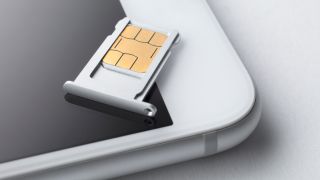 If you've shopped for a new smartphone over the last few years, or if you've tried to switch wireless carriers, you might have heard about unlocked phones. But what are unlocked phones, and what should you know about them before buying your next device?

In short, an unlocked phone is a phone that is not exclusively tied to a single carrier. Unlocked phones can be moved from one network to another, typically by swapping the SIM card inside. Your device's SIM card is basically the physical pass that allows your device to connect to a specific network. When you change carriers, you'll have to change the SIM, too.

Almost every phone bought through a carrier is locked to that carrier indefinitely, though you can usually have the lock removed once you've satisfied certain conditions or paid off the device. Each carrier has its own rules about what you need to do before it'll comply with your unlock request. The lone exception to that general rule is Verizon, which is legally obligated to unlock its phones after 60 days, due to an agreement with the FCC.

Sprint: To unlock, the device must have been active for at least 50 days. All associated service, installment or lease agreements must be fulfilled, and the device cannot have been reported as lost, stolen or associated with fraud.

If your phone is locked and you try to replace the SIM inside with one from another carrier, it won't do you any good; you must first input a special code to unlock your phone before it'll work on other networks, and you'll have to get that code from the carrier you purchased the device from.

To avoid the headaches of locking and unlocking phones, some customers prefer to buy devices "factory unlocked," either from a retailer such as Amazon or direct from the device maker. Most phone makers sell unlocked models. Apple does for all its iPhones, for example, as does Google for its Pixel handsets and Samsung for its Galaxy S and Note lines.

What to watch out for when going unlocked

Sounds nice, right? Unsurprisingly, however, there are a few catches with unlocked phones. When buying a phone unlocked, you may not be able to pay for it in interest-free installments like you would if you bought it through your carrier; instead, you'll have to pay off everything in one lump sum. Some manufacturers do offer financing, though that varies on a case-by-case basis.

And, of course, you won't instantly have service when you take your unlocked phone out of the box; you'll need to go to a network that supports the phone, choose a plan, get the proper SIM card and go through an activation procedure, which will differ depending on your wireless provider.

Oh, and that's another thing: Not every unlocked phone will work on every network. The cell towers for each carrier operate on different bands. Many LTE bands are shared across the carriers, though there are also GSM and CDMA bands, which are used for legacy connections, like 3G. They're still necessary, as they form the backbone of today's networks.

Some carriers are GSM-based, while others are CDMA-based, so you'll need to make sure that any unlocked handset you buy is geared for compatibility with that particular network. AT&T, T-Mobile, Metro and Cricket Wireless are some examples of GSM networks, while Verizon, Sprint and U.S. Cellular are based on CDMA technology. Some higher-end handsets, like iPhones and Pixels, support both networks, though most unlocked phones tend to be GSM-only.

When buying an unlocked phone, always confirm first that it'll run properly on the network you intend to use it on; you can do this by looking up its specs and comparing the bands it supports with the ones advertised by the carrier in question. That's a step you don't have to take when buying through a wireless carrier, because they'll only offer phones that perform on their network.

You should also find out if the carrier restricts any features to appear on only those phones they sell. Sometimes, carrier-locked devices get exclusive perks. AT&T, for instance, offers the option for voice-over-LTE and Wi-Fi calling only on handsets sold in the company's stores, not on unlocked phones. Say you brought a factory-unlocked Galaxy S10 Plus purchased separately to AT&T's network; even though AT&T offers the S10 Plus at the company's retail locations and on its website, you'll miss out on the special features, because you didn't buy the AT&T-specific model.

If you've been eyeing a 5G phone, note that those are still exclusive to carriers for the time being and likely will continue to be until those next-gen networks mature in the coming years. Much like when 4G LTE launched, it could be a while before phones with 5G connectivity are available unlocked. That's because each carrier's version of 5G varies slightly and uses different technologies. (For example, phones designed to work on T-Mobile's 5G network won't currently run on Verizon's.)

Who should buy an unlocked phone?

Early adopters. If you need to have the newest device as soon as it's released, then buying an unlocked phone is the way to go. You'll need to have the cash on hand to pay for the device up front, and you won't be able to take advantage of any carrier deals. But that's the price of having the latest and greatest tech before everyone else (5G phones notwithstanding, but more on that below).

Bargain hunters. From Alcatel to ZTE, several phone makers offer unlocked phones at very low prices. In fact, we've tested a number of very good unlocked phones that sell for under $300. One reason these phones are so affordable is that the manufacturers don't need to deal with carriers, and they can pass those savings on to you.

Frequent updaters. Buying an unlocked phone means you're free to upgrade when something new comes along. Even better, when you already own your current phone free and clear, you can resell it.

International travelers. Having an unlocked phone makes it easier to swap out your carrier's SIM card with a pay-as-you-go option for use on networks overseas.

Who should buy a phone from a carrier?

People who want to pay off a phone in installments. If you're looking for a deal on a brand-new flagship phone from Apple, Samsung, Google or any of the other major hardware manufacturers, your best bet is to go through a carrier. AT&T, T-Mobile, Sprint and Verizon all offer discounts, trade-in offers and other ways to entice you to buy a new phone (and sign up for monthly data plans). And if you decide you need your device unlocked later on, that's always your prerogative, so long as you meet the carrier's terms and conditions.

People who want to keep it simple. If you don't want the hassle of figuring out how to get your new phone up and running, going through a carrier is the wiser choice. You can get assistance with moving your SIM card over from your carrier (unless you purchase your new phone online), and many carriers will help you transfer your old phone's data over to your new phone.

5G early adopters. 5G devices are the lone exception to the general rule that early adopters should buy unlocked. These phones are still carrier-specific and likely will be for a while. So if you want superfast data speeds, you'll have to continue buying your device through a carrier for the foreseeable future.

What should I do after I buy a phone?

Transfer your data. Most phones make it easy to transfer your old data, so you don't really need any extra help. For iPhones, all you need to do is sign in with your Apple ID to port over most of your contacts, apps and saved pictures. And for Android devices, you just log in to your Google account. You likely won't find it much of a hassle to switch data from your old handset if you go the unlocked route.

Delete some apps. You'll spend less time deleting unwanted apps and skins off an unlocked phone. Take an Android phone from Verizon, for example: It has a host of mostly redundant preinstalled apps, ranging from Verizon-branded apps and games to NFL Mobile and Slacker Radio. AT&T, Sprint and T-Mobile are bloatware offenders, too. (Good news if you prefer iPhones: Apple doesn't allow outside apps to come preinstalled on its phones.)

Still, even unlocked phones may feature some bloatware. An unlocked Galaxy Note 10 from Samsung comes with stuff you might not want, like the Samsung Gallery photo app and Samsung's Smart Home management app.

Buy insurance. You don't need to insure your smartphone, but if you've been known to shatter a screen or two, getting insurance is probably a good idea. When buying a phone through your carrier, you'll often get the option to add device insurance for a small monthly fee.

A few manufacturers offer their own insurance programs if you buy an unlocked phone. Apple, for instance, offers AppleCare+ for unlocked iPhones purchased through the company's iPhone Upgrade Program. The vast majority of phone makers provide one-year warranties and customer service for people who buy unlocked phones directly from the company websites.

Here's the deal: Buying a new phone comes down to money and cell service. If you want a specific phone and the carrier that provides the best service in your area is offering a deal on the device, that's a good way to go.

But if you hate the idea of being tied to a carrier and you have the money to splurge on a flagship phone whenever you want, then buying an unlocked phone is probably the best option. Going the unlocked route is also great for people who want a phone for less than $500, or even as low as $200. Figure out your priorities, do your research — and Godspeed!