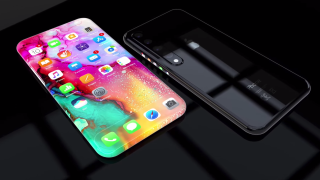 When it comes to out-there concepts, Apple rarely shies away from pushing design boundaries beyond the imaginable. It's safe to say they're the tech trendsetters, especially among smartphone manufacturers that mimicked the iPhone's concept across the board.

While Jony Ive's exit, slowing iPhone sales, and increasingly impressive competition have caused many to question Apple's ability to pilot innovation, a wild redesign of its flagship could very well reinforce the company's reigning title for best smartphone.

Though rumors surrounding the iPhone 11 don't imply a revolutionary design update (yet), we're bound to face a handset unlike anything we've seen before in the near future. With Apple and other top smartphone makers steadily releasing new models every year, who knows what lengths engineers will take to outshine competition.

A concept artist, Hasan Kaymak may have just presented Apple with a possible path: an edge-less iPhone. As in, an iPhone with no bezels nor notches. Crazy, right? That's impossible! The iPhone Edge? Preposterous!

Except it isn't. The device featured in the concept video doesn't just look realistic, but proposes actual specs, too. Kamak imagines the iPhone 11 Edge with a 6.4" full-edge display, quad camera on the back, a hidden camera on the front, and an Apple 5nm A14 chip eight times faster than the already-stellar A12 Bionic.

We're calling it a now. A phone like the iPhone 11 Edge will be in our hands one day. Just not any day relatively soon, probably. Display makers have already figured out flexible OLED screens, and they'll only get more malleable with time. Speakers can be built into displays and small sensor cameras can be hidden behind screen.

This device is completely conceivable, even if it's not quite ready for mass-production yet. Still not convinced? Check out the concept video for yourself.