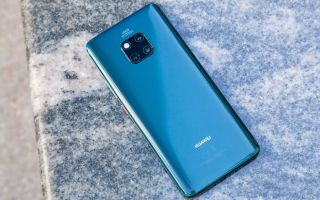 Alongside the Galaxy Note 10, iPhone 11 and Pixel 4, Huawei’s Mate 30 is one of the most anticipated smartphones for 2019. While Huawei is definitely on the defensive right now with its difficulties with the U.S., the Mate series has established a reputation for delivering innovative features and powerful core functionality.

With the likely release date due in a matter of months, there’s already been some Mate 30 leaks and rumors circulating, with more likely to come as the reveal event draws nearer. Read on to find out the latest news and a feature-by-feature breakdown of what we expect to find in the new Huawei phone.

Huawei Mobile has announced that the Mate 30 series will debut at an event in Munich on September 19 at 2PM CET (9AM EST, 6AM PST or 2PM BST). You will be able to follow along via a livestream on Huawei's website.

Dr. Wang Chenglu, Huawei Consumer’s president of software, had previously said that September 19 would be the European launch date according to hi-tech.mail.ru, which is earlier than the expected October reveal date. As for when the phone goes on sale, we will have to wait until the launch to find out unless we get any more surprise leaks.

In terms of price, the Mate 20’s list price is £699 for the standard and £899 for the Pro version, so expect a price that is at least equal to that if not a little more.

You can buy the international version of these phones in the U.S. for similar amounts in USD via Amazon, but it’s unlikely you'll ever be able to purchase these handsets through a U.S. carrier.

As was the case with the Mate 20, we’re expecting both a standard Mate 30 and a Mate 30 Pro to be available. The Pro will be the more expensive model with all the kit that Huawei can throw at it, while the standard will be substantially the same phone, but with some of the advanced features missing in return for a price cut.

Huawei’s just released the 5G edition of the Mate 20, named the Mate 20 X, and the flexible Mate X is also meant to be 5G compatible, using the same Balong 5000 modem.

It’s rumored that the Mate 30 will also have 5G networking, but in a version separate from the initially available devices, much like Samsung is doing with its Note 10+ 5G model. A product roadmap published by Russian site Hi-Tech indicates a possible December 2019 release for the Mate 30 5G.

While we initially assumed that the Mate 30 series would have a 4,200 mAh battery, the same as the one providing power to the P30 Pro, the Mate 30 Pro it may actually have more. A Slashleaks post, sourced via Weibo, shows a 4,200 and 4,500mAh battery, and suggests that there is a third more powerful battery, although they don't say the capacity. A leak by frequent Slashleaks contributor RODENT950 backs up the 4,500mAh claim, although just for the Mate 30 Pro.

The P30 Pro made it on our list of phones with the best battery life, lasting nearly 13 hours on the Tom's Guide web surfing test. If the Mate 30 Pro could outlast that time, even with its larger screen and more powerful hardware, that would be seriously impressive.

The other rumor for the Mate 30 is a 55W fast charging system, which would be even faster than the 40W charging on the previous model.

Leaked images from prolific leaker Ice Universe show display protectors for the Mate 30, and new ones from an unknown Weibo user show it’s quite similar to the P30 Pro’s display - an AMOLED screen with curved edges.

This is typical of this year’s crop of premium smartphones, so these images are fairly easy to believe. It’s not guaranteed, of course, since the standard P30 doesn’t have a curved screen. It’s possible that the Mate 30 will follow this pattern, sporting a flat-display while the Mate 30 Pro could be curved.

More images posted by Ice Universe of the Mate 30, apparently taken on a subway train once again, give us a side angle shot shows a very sharp angled ‘waterfall display’, like we’ve seen in sneak peaks from Oppo.

We can see it again here in this clearer shot, first uploaded in a now deleted Weibo post but saved by Android Central, of the display wrapping over the sides of the handset.

As with the Mate 20 and the P30 series, there will most likely be a in-display fingerprint sensor for unlocking the phone, although many are speculating that the left part of the top bezel might be hiding some similar 3D face unlocking tech to the iPhone XS. RODENT950's big leak of Mate 30 Pro specs indicates this bezel will contain the hardware needed for Huawei's second generation face recognition software, which will be able to read your heart and breath rates too as a new feature.

One of the most distinct parts of the Mate 20 is its small square camera patch in the top center of the phone, which contained three cameras plus a flash. According to the most recent rumors, plus hints from Huawei's promotional art, this square is now a circle.

Ice Universe posted an image (allegedly from another leaker on Weibo) that show a circular body with a vertical line off to the side, presumably the flash.

You can see a plastic window on the back of the disguise case (pictured above) which hides where the rear cameras would be, which at least looks to match the general location of the leaked case, as does the exposed flash module on the phone's left side.

Ice Universe, Ishan Agarwal and Max Weinbach, all posted a leaked piece of promotional art for the Mate 30, and it clearly shows a circular shaped camera array on the back of the handset. It's also what OnLeaks and Pricebaba used as a reference for their new renders of the Mate 30, some of which you can see on this page. Huawei's own teaser for the Mate 30 launch event heavily suggests that these are correct.

The P30 Pro, Huawei’s other top-tier smartphone released earlier this year, came with four cameras on its back (if you include the TOF sensor), and introduced a 1.17-inch ‘SuperSpectrum’ sensor, which gives the phone an amazing level of light sensitivity with its photos thanks to its large size and well designed software accompanying it.

Twitter leaker Ice Universe has recently hinted at the Mate 30 having two 40MP cameras. A diagram they tweeted shows how much larger the two Huawei sensors are in comparison to the Samsung Galaxy Note 10’s single 12MP sensor. One of these looks to be the same 1.17-inch sensor that the P30 Pro uses, but there’s also a larger 1.55-inch sensor in the image, likely the tech behind the Mate 30’s headlining camera.

RODENT950's leak follows this. According to his information, the second 40MP camera is a wide cine camera with audio zoom, which we've recently seen on the Galaxy Note 10. We can also expect an 8MP telephoto sensor with a 3x optical zoom and a time-of-flight sensor to top it off.

The Mate series has tended to be where Huawei shows off its newest internal hardware, and there have been rumors published by News.QQ (translated by GSMArena) from ‘internal sources’ of a Kirin 985 processor being part of the Mate 30. This would be a step up from the Kirin 980 currently in use in top-tier Huawei and Honor phones.

The same rumors as above say that there will be 8GB of RAM and 256GB of storage, respectively in the Mate 30. This follows previous trends, but doesn’t match up to the 12GB and 1TB combinations we are seeing in some other handsets.

Dr. Wang Chenglu, a hi-tech.mail.ru source claims, says the Mate 30 will indeed feature an upgraded CPU, but this will be known as the Kirin 990, not the 985. HiSilicon, manufacturers of the Kirin series of chips, has sometimes made intermediate versions of its existing CPUs, before updating to a fully new generation, but it hasn't done so for a few years. The Kirin 985 would be an interesting upgrade, but the 990 would be even more so, since it carries with it the implications of far greater performance and efficiency upgrades.

A fresh set of leaks from RODENT950 seem to confirm many of these rumors - the CPU will be the 990, and there will be an 8GB RAM version. What's new is the claim that the Huawei Mate 30 Pro will contain up to 12GB RAM and 512GB storage, which is much more memory capacity than we've seen on any Huawei phone to date.

Even though it's barred from having Google's own apps preinstalled on the Mate 30, the new Huawei flagship will still run on Android according to RODENT950, specifically Android 10 with Huawei's latest Android launcher EMUI 10 running on top.

The current version of EMUI, 9.1, is a pleasant enough OS to use, with useful options such as switching between different grid layouts and having or not having an app drawer. Huawei does load lots of its own apps that you’ll likely not want to use, but that’s about the only downside.

Considering the fallout from Huawei’s run-in with the US government, it's not clear how it will impact the launch of the Huawei Mate 30 and the features the company can include. But the Mate 30 could turn out to be a fantastic smartphone based on its rumored features and a formidable Galaxy Note 10 rival. Stay tuned for more info as we get closer to launch.