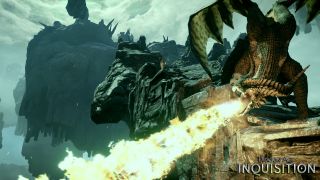 Dragon Age: Origins debuted in 2009, Dragon Age II debuted in 2011 and Dragon Age: Inquisition debuted in 2014. The developers are making fans wait a little longer between each successive Dragon Age game, and the upcoming Dragon Age 4 is no exception. Five years (and counting) after Inquisition, fans are still waiting on a lot of concrete details about the next entry in BioWare's sprawling high fantasy saga.

Still, we do know a few things about Dragon Age 4: a basic premise, a suspected villain and even a potential title. Information beyond that, however, is largely speculative and uncertain — owing, perhaps, to a tumultuous development history. Here's everything we know about Dragon Age 4 so far.

First things first: We have no idea when Dragon Age 4 is coming out. Dragon Age has never been a "new entry every X number of years" series, and we doubt it's going to become one anytime soon. The one solid trailer for the game we've seen didn't give us any hints. So, all we can say for sure is that Dragon Age 4 release date is "2020 or later."

If I had to put money down, though, I would wager on "later." BioWare tied up a lot of its resources in launching Anthem this year, and to put out an equally big (or bigger, if Inquisition is its template) game one year later would be quite a feat, even for a developer with EA's resources at its disposal.

A Kotaku report suggests that BioWare canceled an earlier version of Dragon Age 4 outright, which would push the release date even further into the future.

The last big, concrete thing we heard about Dragon Age 4 was at the 2018 Game Awards, where BioWare showed a teaser trailer for the game. (See below.) The trailer didn't give us a whole lot of information, though; it's just a lot of artwork and two lines of dialogue.

One interesting tidbit, though: The trailer ends with a hashtag, #TheDreadWolfRises. This might be the game's title — or it might just be a way for BioWare to keep tabs on the game's social media presence. (It does have a nicer ring to it than "Dragon Age 4.") If The Dread Wolf Rises is really the game's title, it's not a bad one; if not, it does at least give us a few hints about the story. BioWare bigwigs Mark Darrah and Casey Hudson have also mentioned the game, at least in passing, but there's no concrete information in either one of their posts.

At The Game Awards 2018 in December, BioWare showed off a very short teaser trailer for Dragon Age 4. You can watch it here:

As you can tell, there's not a whole lot there: Just some armor, a magical trinket and the silhouette of Fen'Harel, the Dread Wolf: one of the gods in the Dragon Age pantheon. There are also two lines of dialogue from the traitorous mage, Solas: "You've found me at last. I suspect you have questions."

It's admittedly not much to go on. But for a little Dragon Age history mixed with a little baseless speculation, read on.

To summarize the whole saga of Dragon Age would take more time than I have in this particular article, but here are the broad strokes. Spoilers ensue, particularly for Dragon Age: Inquisition.

In Dragon Age: Origins, you take control of an adventurer who swears his or herself to the Grey Wardens. This ancient order exists to fight against the invasive Darkspawn, and their draconic master, the Archdemon. If left unchecked, the Archdemon can summon a Blight that will wipe out all life in the high-fantasy world of Thedas. By recruiting a party, making alliances with powerful nations and performing a tremendous sacrifice, the Grey Warden defeats the Archdemon and saves the world — for now.

Dragon Age II tells a much more personal story, centered on the Hawke family in the city of Kirkwall. Taking place before, during and after the events of Origins, you play as Hawke (first name: up to you), the son or daughter of a noble household trying to make your way in the world. Dragon Age II's story is picaresque and takes you in a variety of different directions, but the central conflict is between the Mages, who want freedom from an oppressive religious order, and the Templars, who see themselves as the last line of defense against a demonic uprising.

Dragon Age: Inquisition ties these two stories together, to some extent. Hoping to avoid a full-scale war between the Mages and the Templars, the most powerful people in Thedas convene a conference. But a magical explosion kills all in attendance, save for a lone survivor who sets out to investigate the matter. He or she becomes an Inquisitor, who must build up a grassroots support network all around the continent, with the ultimate goal of defeating a demon who seeks to manipulate both the Mages and the Templars for his own gain.

In Inquisition, one of your party members is Solas: an enigmatic mage who is never 100% clear on why he's joined your quest. After you defeat the final boss, he leaves the party entirely. (There is some postgame content that you can complete with other companions.) During the Trespasser expansion — Inquisitions' final piece of downloadable content — you finally reconvene with Solas, who reveals that he is really Fen'Harel: the Dread Wolf. And he wants revenge on Thedas for making his race, the elves, into second-class citizens.

The Inquisitor realizes that Solas knows the party too well, and that any action against him will have to come from a brand-new group of adventurers. So, it seems safe to say that Dragon Age 4 will involve — at least in some capacity — a new protagonist leading a (mostly) new group of heroes against the Dread Wolf.

Of course, knowing BioWare's propensity for twists and turns, it probably won't turn out to be quite that simple. But it's a good place to start. We'll share more about Dragon Age 4 whenever BioWare elects to reveal more information.