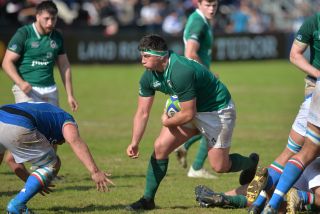 This year, the Rugby World Cup 2019 kicks off on September 20, with teams around the world vying for the top spot. While the ultimate champion and World Cup winner will be crowned on November 2, it's never too early to start watching: here's how to live stream Ireland vs. Italy.

Right now, two of the best teams in the world, Ireland and Italy, will be vying for victory in a warm-up match ahead of this year’s World Cup. However, it's not as simple as you may expect to live stream Ireland vs. Italy, so we've compiled a handy guide.

Both Italy and Ireland have strong teams with plenty of outstanding players. But most folks who watch rugby regularly believe it’ll be Ireland who will win the day. Italy, of course, might have a thing or two to say about it.

When is Ireland vs. Italy? And why does it matter?

In the grand scheme of things, the match doesn’t necessarily mean much, since it’s little more than a warm-up match ahead of the World Cup in Japan next month. However, it does give both teams some important insight into the opposing team and help them work out some problems ahead of the important World Cup event.

How do I use a VPN to live stream the match?

If you’re traveling outside the country or simply want to watch programming in another country that you can’t get stateside, a virtual private network, or VPN, could be an ideal choice. With a VPN service, you can connect to your desired streaming service through a chosen country’s server, which will let you access the match as if you were there.

Here are three VPN options worth considering should you need them to follow the match.

How can I live stream Italy vs. Ireland?

Streaming rugby in the U.S. isn’t necessarily the easiest thing to do. Channel 4 has several apps, including iPhone, iPad, and Android apps, that allow you to stream its live programming. However, you’ll need to have a Channel 4 account in order to take advantage of that. If you don’t, you’ll be out of luck.

That said, it’s relatively simple to sign up for a Channel 4 account. You simply need to input your email, create a password, and go through the steps on this page. You can then create your account and watch programming.

If you already have a Channel 4 subscription, you can go to the network’s website, sign in, and watch the live stream there. If you’d prefer to watch it on a mobile device, simply download the apps, sign in, and stream them live.

Here’s a handy guide for finding your app options for Channel 4.

Can I watch Ireland vs. Italy on television?

Sure, if you’re in the UK. That’s where the match will be airing live on Channel 4. However, there isn’t a live broadcast in the U.S., which means you’ll need to find an alternative. And a VPN might be just the ticket.