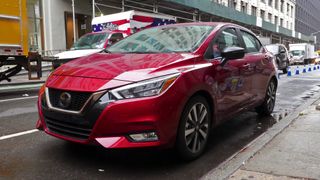 There are two kinds of car buyers: the "point-A-to-point-B" type, and the type that is easily smitten with specs and luxuries and gadgets. Although I consider myself a member of the latter camp, I can understand the former.

The Nissan Versa has been one of those "point-A-to-point-B" cars since its inception. For a while, it was the cheapest new car on sale in the U.S. — the Chevrolet Spark has since stolen that distinction — and it is likely the last to ever have been priced under $10,000. Yet the Versa has never come easily recommended as a consequence of its anemic power, dowdy styling and short list of standard equipment.

That all changes for 2020. The new Versa represents the model's most dramatic overhaul since the second generation hit dealer lots in 2012. Although it rides on the same Nissan V platform as the outgoing model, the new Versa has been comprehensively redesigned inside and out, with lower, wider and longer dimensions and a suite of new tech and safety features to match.

The upshot is a Versa that — dare I say it — you actually want to drive. I took Nissan's new subcompact for a spin in Manhattan's Upper West Side, and while the infamous New York City traffic tried its damndest to ruin my trip, the new Versa proved a comfortable, modern and fun place to be in spite of that.

A little fun, a lot of comfort

The 2020 Nissan Versa begins at $14,730 for the base, five-speed manual S configuration. Those who would rather not row their own gears can upgrade to an Xtronic CVT for $16,400. The next step up, the SV, adds the NissanConnect infotainment system featuring Apple CarPlay and Android Auto, as well as the full suite of the automaker's safety features. We tested the range-topping SR model, which starts at $18,240 and punches up the interior and exterior accoutrements while tossing in automatic climate control, among other niceties.

The automatic climate control proved its worth on a breezy, drizzling day in New York. While a jam-packed city is rarely my first choice for a long test drive, I didn't particularly mind the blaring horns and incessant construction. Neither of them were all that loud inside the Versa's quiet, sound-isolated cabin.

Once I got moving onto the Henry Hudson Parkway, I also wasn't perturbed by the resurfacing in the right lane. The Versa's ride is soft and compliant, but not from lack of responsiveness. It shook off your typical New York potholes with relative ease.

Even though the road feel was a bit muted as I held the wheel, the steering remained light and direct. The most egregious penalty boxes feel absolutely disconnected from the asphalt, but the new Versa isn't one of them.

What's more, a lot of that comfort is owed to Nissan's Zero Gravity seats, which envelop you in softness. The sport cloth trim in the SR is plush and cushy, yet not so much so that you sink in or slide about. Coming from the unyielding partial-leather Recaros in my Fiesta ST, sitting in the Versa was like being nestled in a cloud.

A big step up

It was at that moment, as I realized how very comfortable I was and all of the aforementioned reasons why, that a disconcerting thought crossed this lifelong car enthusiast's mind: Who really needs more than this?

Don't get me wrong — I'm aware there are many good answers to that question, and I don't mean to suggest that the Nissan Versa is a perfect car. (I'll get into the reasons why a little later.)

But you get a lot for the $19,135 sticker price of that high-end SR model, and unless you need a vehicle that is larger or faster, or you're entertaining the prospect of a luxury sedan (in which case you probably wouldn't be looking into the Versa to begin with), Nissan has mostly everything covered here.

That extends to the tech available, which includes a 7-inch touch screen on SV and higher packages that supports Apple and Google's connected-car platforms. Nissan told us it ditched built-in navigation on the new Versa, which is a clever move. If the manufacturer is truly looking to court younger buyers, there's no need for it — those drivers would prefer to use their phones anyway, and Nissan gets to keep the sticker price down. Everybody wins.

The SV and SR add blind-spot warnings and rear cross-traffic alerts, which create a more complete safety tech package compared with some competitors in the segment, like the recently refreshed Toyota Yaris and Hyundai Accent.

The interior isn't much to look at, but the fit and finish is satisfactory, and the materials, like the faux-leather dash on our tester, isn't offensive to the touch. I was also surprised to find, in the instrument cluster alongside the speedometer, a sizable second screen that can be programmed to display lots of different information, including music-playback details from CarPlay or Android Auto.

However, the real design wins can be seen from the outside. "Improvement" doesn't even begin to describe the 2020 Versa's angular new look — it's leaps and bounds easier on the eyes than the tragic, lumpy sedan it replaces. Nissan's Emotional Geometry aesthetic has been adapted well to the subcompact scale, and doesn’t feel as jumbled and awkward as it did on the full-size Maxima.

Still, the new Versa is but a modest, sub-$20,000 four-door, so getting going isn't really its top priority. There's only one engine on offer — a naturally aspirated, 1.6-liter four-cylinder that produces 122 horsepower.

That's good for a 13 horsepower increase over last year's model, though it can't save the new mill from struggling up hills at highway speeds, as I discovered on my test drive. At least the new Versa should be able to go a little farther between fill-ups, as the CVT version has gained 1 mpg across the board, for a total of 32 city/40 highway.

While this Versa has grown in every dimension, and front legroom has increased to a best-in-class 44.5 inches, back-seat passengers have gotten the short end of the stick. Nissan has slashed legroom in the back by 6 inches, for a total of 31 inches. That makes it a somewhat tighter fit than the competition, as our video guy Paul can attest to. There's room back there — just not a whole lot of it.

Unfortunately, there won't be a new Versa Note hatchback to complement the sedan. Nissan ended production of the Note earlier this year, so buyers interested in a five-door will have to look elsewhere. In fact, the Honda Fit is a good replacement, as it matches many of the new Versa sedan's headline features in a more versatile body style.

The sedan appears to be a dying breed, at least in North America. But sedans are still a prominent feature of Nissan's range, and the Versa is a strong statement in a segment that's getting less and less attention these days.

It helps, too, that the new Versa is smack-dab in the sweet spot on pricing. The Yaris is more expensive across the board and lacks the Versa's distinctive safety features, like cross-traffic alerts. The same is true for the Kia Rio, which starts at a higher price than the Versa but provides fewer optional extras and costs less at its steepest configuration.

If you're on the hunt for a small, cheap sedan with a lot of value that's reasonably nimble and super comfortable, the Versa has entered that conversation. Formerly the domain of rental car lots and loaner cars, Nissan's entry-level model is finally good enough to stand on its own merits. In fact, it's so good for the money, it might even make you question the point of spending more.