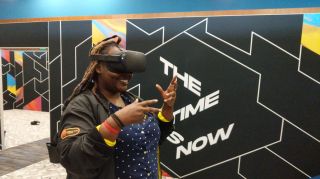 SAN JOSE, CA - When I first demoed the Oculus Touch controllers back in 2018, I was blown away at the ease of use and overall comfort. And when they finally launched, they became the best way to interact with VR headsets, until now.

I just demoed Oculus' latest controllers and I've gotta say, they're better than anything I've used thus far. Which makes sense because they're my own two hands.

Early next year, Oculus is rolling out hand tracking on its self-contained system, the Oculus Quest. I went hands-on with the new tech at Oculus Connect 6 and while it's not quite ready for primetime, the potential is definitely there. Facebook VR Product Lead, Erick Tseng is definitely excited about the new technology and its potential use cases.

“So my personal favorite is the lean back," said Tseng. "I’m just like watching some really great content. Right now, if I have to go hunt for controllers, I’m maybe a little less inclined to do that. But if I can just put on my headset, do a few swipes through some menus of content by hand scroll, pinch to like, select and then read back and watch. That’s awesome.”

I got my first taste of hands-tracking with Elixir. Created by developer Magnopus and Oculus Studios, the game puts you in the role of a potential sorceress' apprentice, exploring her lab at her behest. My hands were represented by a pair of blue virtual hands, which fall in line with Oculus' default look.

Entering the lab, my first controller-free gesture was to poke a chubby little dragon in the belly, causing him to vomit into an awaiting cauldron. The sorceress then commanded me to stick my hands in, which I did, covering them in yellow-green gunk. But not to worry, a nearby faucet and a quick scrub got them all clean. I was impressed with how accurately the Quest's integrated sensors captured my hand-washing movements.

Next, I saw a pair of live electrodes and I put my hands right on them, electrifying my hands. Forming a fist created an electric sphere which I threw to power more mechanical doodads. I also groped a treasure chest in its eye, releasing three flying eyeballs. Chasing one back to the cauldron, I knocked a potion into the dragon bile, creating a blue concoction that transformed my hands into a pair of tentacled monstrosities. Wiggling my fingers caused the tentacles and suction cups to writhe around in a disturbingly life-like manner.

Although the Elixir demo is fun and a solid introduction to hands-free tracking, I did encounter a hiccup. The headset kept losing track of my hands when I tried to engage with particular objects in the world. I discovered that my jacket was the problem as the sleeves were slightly obscuring my hands and their subsequent movements. Rolling up my sleeves alleviated the problem for the most part, but I still encountered the issue every now and then. However, this is an early demo and I expect that Oculus will have buttoned everything up by launch.

The end of Touch Controllers?

While it might look like the Touch Controllers days are numbered, at least on the Quest and the Rift S, Tseng disagrees.

“Yeah, I think that's controllers are here for the foreseeable future. "Hand [tracking] is a compliment to other types of control inputs. Hand controllers are one but if you play out the scenarios that we would envision for a proper ecosystem — keyboards, stylus, there’s all sorts of third-party accessories that you can imagine just like versions of inputs.”

Having the ability to use your hands in VR is fun and immersive, but what’s Oculus doing to make sure that people with disabilities can get in on the action? Facebook is currently working on solutions to make sure that everyone can enjoy VR. Tseng points to Facebook’s mission to get headsets into as many households as possible and that it only makes sense for the devices to be as accessible as possible.

“[T]his this is where I am excited about hands, because in some cases, hands will be a better form factor for inputs than a controller some people; in other cases, controls be better,” says Tseng. “And it's just really about choice. Voice is another good example better if neither of those work, you can increasingly use voice to control your user experience as well. And so we're going to be pushing on all those different modalities.”

For me, as cool as going controller-free is, there was definitely something missing —  tactility. When I grabbed those electrodes, it would have been nice to have a rumble sensation to play up the experience. Which is why hand-tracking is more likely to be an accompaniment than replacement to the Touch Controllers. But still, when it becomes available, I foresee hand tracking becoming one of the main navigation options for many Oculus Quest owners