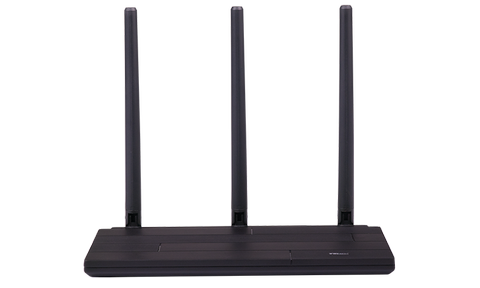 The Terk Trinity offered solid reception at a good price, but we wished it looked sleeker.

Viewers trying to pull in more distant stations without resorting to an outdoor antenna.

Looking more like a Wi-Fi router with its three vertical antennae that stand about 8 inches high, the Terk Trinity is designed to sit on a shelf or tabletop. The amplified antenna requires a separate power plug (it doesn't have a USB port option), which can be awkward to situate when you're trying to find the best signal location and hide the wires. The Terk Trinity is rated by the company to pull in stations up to 60 miles away. The company refers to this model's design as "trimodal technology" and the position of three antennae can be adjusted individually to fine-tune reception.

In our tests, the Terk Trinity pulled in more stations than non-amplified (and many amplified) indoor antennae. It recognized a total of 34 channels, about six of which were deemed too weak to watch comfortably (dropouts and glitches were simply too irritating). The Trinity did well delivering a crisp picture from stations such as the local CBS and Fox affiliates in 1080i. It also managed to draw in weaker stations, such as several HSN channels.

Still, results were mixed. While the Trinity received stations that other models in the same test location could not — such as a children's station, Qubo, and the local NYLife — it also had trouble getting stations such as the local ABC affiliate that the Terk Horizon received without problems. Adjusting the vertical antennae can improve reception, but it can be a tricky maneuver since achieving better reception on one channel often means sacrificing reception on another station.

While it isn't the most svelte or easy-to-conceal HDTV antenna on the market, the Terk Trinity is an excellent amplified option for viewers trying to acquire the maximum number of available stations using an indoor antenna.