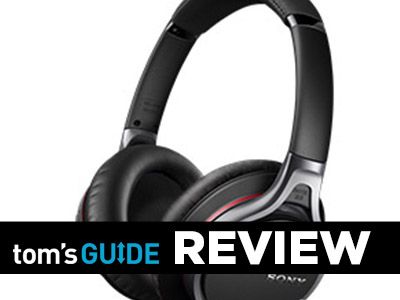 Very good noise cancellation and comfort may be plenty for many users, though we do wish these cans sounded better.

Sony's MDR-10RNC ($270) is the more affordable version of the company's top-of-the-line MDR-1RNC ($500) noise-cancelling headphones. With similar styling to its big brother, the MDR-10RNC claims to block 99 percent of external noise, using sensors inside and outside the earcups. It also offers powered or unpowered listening. However, did Sony cut too many corners in the audio department to get the price down that low?

The MDR-10RNC's swiveling earcups are styled in a fashion-friendly matte black with silver and red accents mounted on a well-padded headband. The headphones fit easily in the included case, which is fairly protective compared with softer pouches like the one paired with the Logitech UE 6000. The two supplied cables are detachable, and one has an inline mic/controller that handles playback, calls and Siri, but oddly not volume. The package also comes with an airplane attenuator and a triple-A battery, which slips into a compartment in the right earcup. You'll find the power switch and a button that adjusts the noise-cancellation strength. Built-in mics in each earcup monitor ambient noise.

Bose is still the comfort king among noise cancellers, but Sony does quite well with the MDR-10RNC's comfy leather earpads. We were able to wear them on a cross-country flight without any pain. We prefer the Beats Studio's extra-thick earpads, but the Sony cans' headband is noticeably more comfy than the Beats' hard-rubber version.

Bose is also the undisputed winner in noise-cancellation effectiveness, but Sony turns in a strong effort here, too. The MDR-10RNC did a very good job of blocking out jet engine noise, though voices still seeped into our in-flight entertainment a bit; Bose does a better job with intermittent sounds as opposed to the droning whine of an engine. Music easily drowns out the slight hiss produced by the active noise-cancellation circuitry, which is really only noticeable if you're in an environment that's already quiet.

Sony's Artificial Intelligence Noise Cancellation (AINC) tailors the noise cancellation strength based on what the built-in mics "hear" around you. The effect is subtle, but we did notice less of a hiss. We also found a reduction in the somewhat odd feeling in our ears produced by noise cancellation when we used the feature in our living room as opposed to on a busy street or a noisy bus. Not everyone will find this feature useful, but we can imagine scenarios in which you might want to hear a little more of what's going on around you than if you were on an airplane. We didn't notice any significant impact of the AINC feature on battery life.

The MDR-10RNC got significantly louder than the Bose QC15s when used with our iPhone and iPad, but not quite as loud as the potentially eardrum-crushing Beats Studio. The Sony headphones' midrange is a little muddy, so the male vocals on Mumford & Sons' "After the Rain" and the horns in John Coltrane's "Blue Train" lost their clarity and seemed muffled. Classical works such as Stravinsky's "L'Histoire du Soldat" (from Stereophile's Test CD2) suffered a similar loss of midrange definition.

Highs are also a bit lackluster, taking some of the sparkle out of complex tracks such as Ray Manzarek & Bal's "Shinjuku Nights." Brandi Carlile's vocals on "The Story," however, sound very good despite floating on top of a somewhat muffled acoustic guitar. Bass-heavy songs such as "What Does the Fox Say?" by Ylvis, and Jay-Z's "Holy Grail" have lots of low-end thump, but the bass is a little sloppy-sounding and lacks the muscular definition of the Beats Studio.

Sony claims you'll get about 20 hours of playback time out of a single AAA battery when using noise cancellation, and since you can just swap out the battery for a fresh one, we're not concerned about them keeping up with claims of longer life from competitors. And unlike the Bose QC15 headphones, the MDR-10RNC still plays music (without noise cancellation) when the battery is dead, albeit at a slightly lower volume.

The Sony MDR-10RNC is sturdy and comfortable with effective noise cancellation, but we prefer the sound of competitors like the Logitech UE 6000 and Beats Studio (with its exaggerated bass), despite those models having less-than-stellar noise cancellation. The lack of an inline volume control is also a questionable design choice, and we have a feeling the headphones could have been even cheaper if they skipped the ability to tailor the noise cancellation to the ambient noise level (which seems like a gratuitous gimmick). Still, if noise cancellation is your main priority and you want to save a few bucks over the Bose QuietComfort 15 (or 20i), the Sony MDR-10RNC headphones are a good alternative.