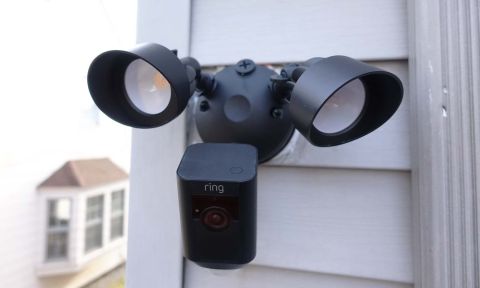 Strong lights, a sharp camera and a great app make the Ring Floodlight Cam the best at securing and illuminating your yard.

Perhaps best known for its doorbell cameras, Ring has a Floodlight Cam that's geared toward protecting other parts of your house. This $249 device has two powerful lights and a sharp, 1080p camera. Combined with a neighborhood-watch feature — which lets you see videos of suspicious activity recorded by other Ring cameras in your area — this camera makes for a great set of digital eyes for your home. It's the best home security camera with built-in lights around.

Ring isn't breaking any new ground with its Floodlight Cam. Apart from the camera section, it looks pretty much like any traditional floodlight that you'd find at a home improvement store. Made of metal, the device comes in black or white.

Below the two LED lights is a fairly large, rectangular housing that contains the camera, a speaker and microphone, and a dome-shaped motion detector on the bottom. All three parts are connected via adjustable arms to a semicircular base, which attaches to the side of your house.

Installing Ring's floodlight cam is similar to the procedure with most other floodlights: A metal ring screws into the junction box on the side of your house, and then the camera/light housing connects to that box. This setup method requires you to use a small s-shaped hook to temporarily hold the housing in place while you attach the wires from your house to the camera and light. It's not as simple as the setup with the Maximus Camera Floodlight, which attaches to the baseplate much more easily.

However, I found it easier to adjust the Ring camera than the Maximus version; the latter requires you to push the camera in and then rotate it. With the Ring, you simply twist the arm the camera is attached to.

After physically connecting the Ring to your house, you must then connect the camera to your Wi-Fi network via the Ring app, specifying things such as your address and the sensitivity level of the camera. In all, setup took about half an hour. Connecting the wiring is fairly simple, but if you're uncomfortable with electrical work, consult an electrician.

The Ring's camera records crisp and colorful 1080p video. It picked up the rust-red deck and fading green grass of my backyard, and I could even make out features of my dog as he bounded around.

Although the Maximus camera advertises a 155-degree field of view, the device measures that diagonally, rather than horizontally. By comparison, while Ring's camera has just a 140-degree FOV, in practice, it showed far more of my backyard than Maximus' camera did; I could see the neighbors' yards two doors down in both directions.

What's more, Ring's app lets you specify motion zones: areas in which, if it detects motion, it will alert you. Maximus' app has this feature, but only if you subscribe to one of the company's plans. So, if you don’t have a plan (like me), the Maximus would often send me alerts when a neighbor pulled in his car on the very fringe of the frame. In Ring's app, you can also set schedules for when the lights and the motion detection should be active.

The Ring camera also has night vision, something the Maximus lacks. Both cameras can be set to turn on their lights when they sense motion, but only Ring's can work in the complete dark, which is helpful for seeing things at the edge of the lights' range. You lose a bit of definition in Ring's black-and-white nighttime videos; I couldn't distinguish any features in my face as I walked in front of the camera.

In addition to saving, emailing and sharing videos via Facebook, you can press a link to notify neighbors; this will share saved videos with other Ring users in your vicinity.

Ring's camera also has two-way audio, so you can talk with whomever you see on camera, as well as a 110-decibel alarm that's loud enough to draw attention. One thing that the Ring lacks — and the Maximus has — is the ability to play prerecorded messages, as well as sounds of barking dogs, gobbling turkeys and more when the camera detects movement.

Want to know what's going on in your neighborhood? The newest feature of Ring's app lets you view security-camera footage that other Ring owners (from any Ring camera) have shared, as well as other alerts — such as fires and reported crimes — around your home. However, you don't need to own or have purchased a Ring device to use this feature; anyone can download Ring's app and view and report incidents.

I found it both unnerving and reassuring to watch video of people stealing packages and testing door locks via Ring's neighborhood-watch feature.

You can specify the radius around your house from which you will receive alerts, and you can both post and comment on footage put online by others.

I found it both unnerving and reassuring to watch video of people stealing packages and testing door locks in my neighborhood.

You can view a feed from the camera on the Echo Show, Echo Spot, and Amazon Fire TV Sticks and TVs.

For $30 per year (or $3 per month), Ring's Protect Basic plan gives you 60 days of video from a single camera and lets you share it with others. That's better than Maximus' starting plan, which cost $4.99 per month but gives you only seven days' worth of footage.

However, if you don't subscribe to any plans, Maximus lets you review the past 2 hours of video and download three videos per month. Without a plan, Ring lets you view live events only as they're happening, but you can set motion zones.

The Ring Floodlight Cam brings Ring's strong security camera bona fides to an outdoor floodlight. Not only was the quality of the video great, but its other features — such as neighborhood alerts in the app — also further enhance the floodlight cam's utility as a home-security device. While you'll need a Ring subscription plan, the company's $30 yearly price is one of the most affordable among its competitors. If you want a security camera and a floodlight in one, Ring is the way to go.