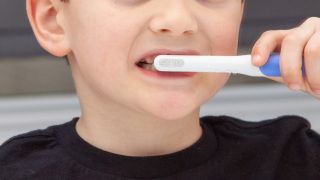 "He needs an ortho consult," the dentist said.

Those are the five words every parent dreads hearing, and I was no different. My son isn't an avid brusher (whose is?), so I was delighted to get an opportunity to try out the new addition to the Quip toothbrush subscription service — the Kids Electric Toothbrush. With the possibility of future orthodonture, having tooth decay was not an option.

Quip's Kids Electric Toothbrush is really slick, at first glance. It's quite thin, the opposite of your typical electric toothbrush for kids that almost always has wide handles. For now, they come in four colors — pink, green, purple and blue (my son requests they add gold to the lineup) and are suited for children ages 3 and up.

The operation is very simple: press the "Q" near the head of the brush, which starts a 2-minute timer with 30-second pulses to indicate when you should change quadrants. My son found the pulses distracting at first — he thought it was broken or that the timer was done, but he quickly got used to it.

He'd been using it for about a week when we made our visit to his orthodontist, Dr. Yakov Eisenberger of Hanson Place Orthodontics in Brooklyn, who gave me his impressions of the brush.

"I like the fact that it has that ultrasonic vibration that breaks up the plaque. So aside from removing the gross material between the teeth or on braces, it also microscopically breaks the plaque that develops on teeth, versus manually (brushing), where you're only working on the surface of the plaque," Eisenberger said.

Still, he thinks the handle "could be a bit thicker because kids don't have that manual dexterity." He adds, "It would be nice if it was contra-angle (curved) to reach the back surfaces, as opposed to this straight toothbrush."

MORE: When Is Your Kid Old Enough for a Smartphone?

My son's opinion on the brush is much simpler — it's much quieter than his old electric brush and it feels like he doesn't have to brush as hard. He also loves the watermelon toothpaste, as opposed to his usual Tom's strawberry.

I compared the vibration of the children's Quip to my fancy and quite pricey Sonicare and noticed there was much more vibration in my brush. I then compared the adult version of the Quip to the Sonicare and noticed the same difference in vibration. My research confirmed this: The Quip delivers about 15,000 movements per minute versus the Sonicare's average of 30,000 movements per minute. Being that my Sonicare was definitely more powerful than the Quip, for me, it didn't feel like the Quip was doing as good a job.

That's not to say I don't think the Quip kids brush isn't a good option. In addition to its obvious improvements over your standard kids' electric brush, I like that it has a  case so it can always be protected from the elements (i.e., the floor), and it's great for travel. On the outside of the case is a thin reusable sticky strip, which is supposed to let you stick the cover to a wall or mirror, to make it easy to keep the brush protected. But we found that didn't work very well on our bathroom tile wall. The instructions say a "very clean and dry surface" is needed, but even then, it didn’t hold for long on the tile or the counter.

The subscription works similar to the adult plan. You'll pay $25 for a Kids Electric Toothbrush Starter Set, which comes with a brush head plus the watermelon anticavity toothpaste, and then every three months, you'll get a fresh small brush head and battery for $5 and optional toothpaste, also $5.

Shipping is free, and there's a lifetime guarantee. Not a bad deal when you consider it's one less thing to add to your shopping list — and how many of us replace our toothbrushes often enough? The subscription model is perfect for parents who just don't have the time (or the memory bandwidth) to keep up with their child's toothbrush-replacement schedule.

My favorite part about this brush? My son actually enjoys brushing his teeth now, and that alone is worth the price of admission.