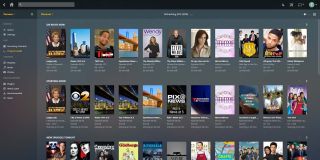 Thanks to a proliferation of cheap, high-quality HD antennas, you can even get dozens of live channels for free — and if you go one step further, you can record them, too. The latest player in this arena is Plex, one of the best media servers around, which also offers automatic library management, channel-specific plug-ins and live news.

The Plex Live TV and DVR service allows you to record network TV programs, then save them for later, just as you would with a DVR box and a cable or satellite subscription. If you're already a Plex subscriber, have a strong internet connection and have a relatively powerful media server already in place, Plex Live TV and DVR is both economical and easy-to-use. Without those things, however, it can be sluggish, unintuitive and potentially expensive.

Without going into tremendous detail about what Plex does (we have other articles to explain that), I'll say that the program started out as a fancy media server. To start, you download a whole bunch of movies, TV shows, music and photos to your computer. (Let us be charitable and assume you procured them all legally.) Plex will then organize these files for you, complete with assigning a title shot for each one and sorting them alphabetically and, where applicable, by season.

As long as your computer (or Nvidia Shield TV) is on, you can watch whatever you want on any other device that supports Plex, be it a Roku box, an Apple TV, an Xbox, an Android phone or another computer. You can set up your media server to broadcast only to your home network or to anyone whom you designate online; it's up to you.

Plex Live TV and DVR works pretty much the same way, just with some additional hardware required. You need an HD antenna and a tuning box. (The tuner built in to your TV can pick up channels, but it can't rebroadcast those channels to the rest of your home network.) Plex sent us a Direct ClearStream Eclipse antenna and an HDHomeRun Connect box, but pretty much anything will work.

To start, I connected the HD antenna to the HDHomeRun, and the HDHomeRun to my router with an Ethernet cable. Be aware that most DVR tuners still require an Ethernet connection, so you'll want to make sure that you can set this up somewhere near both a window and your router.

That part was simple. What comes afterward, unfortunately, is not nearly as straightforward. Plex doesn't explain exactly how to activate Live TV and DVR options on its main page, so you'll have to track down a full explanation at the company's Support site. (Or check out the Tom's Guide tutorial)

You first download the Plex media-server software (which directs you right back to the Plex website — the server software doesn't have its own navigable client). Then, you'll have to dive into the settings, find the DVR tuner on your network, fill in your location information, tell Plex to scan for channels and tell it to download listing information. This lengthy process is not that complicated, but figuring out that this is what you need to do is not that easy.

Once everything is set up, Live TV shows up as just another option in your Plex app, somewhere among your stored music, photo and video directories. Getting around is fairly simple. Once you select Live TV, you'll choose your preferred server (whichever computer you set the service up on), then watch or record whatever you can get your hands on in your local broadcast market.

Efficiency-minded readers have probably already noticed the flaw inherent in this process. If you want to watch broadcast television on your, well, television, it's a complicated daisy chain. The signal goes through your HD antenna, tuned by your HDHomeRun, broadcast by your router, picked up by your computer, then beamed to your TV.

(You can alleviate some of these issues by hardwiring your computer to your router, but that addresses the symptom, not the cause.)

Compare and contrast simply hooking up an HD antenna right to your TV. You won't be able to record anything, true, but this process is much more straightforward than what you get with Plex.

Because of the Plex setup, you'll need a strong, uncrowded internet connection and a powerful computer to act as your media server. Otherwise, the whole process will crawl along, with laggy, unreliable connections and low-resolution streaming. I tested the Live TV feature on the Plex Xbox One app with both a powerful gaming desktop and an old productivity laptop, and the difference in quality was striking.

(Before you say that no one would use a clunky old laptop as a Plex media server, that is actually one of the smartest things you can do with a clunky old laptop. Plex streams downloaded content beautifully from underpowered servers; only Live TV seems to throw such servers for a loop.)

Assuming you can set up a strong connection, navigating through Live TV is functional, but it is neither as pretty nor as comprehensive as, for example, the antenna interface in the AirTV Player. You can see what's on now or browse through lists of movies, shows, news and sports. When you select a live program, you can watch it immediately; when you select a program in the future, you can set Plex to record when the show airs. Fair enough.

What you won't get, though, is a comprehensive guide feature that tells you everything that's on right now, then everything that's on in the next half-hour block and so on. You can't browse listings by channel, either, which makes it a bit difficult to record a show if you already know when and where it will air. You can use the search feature, of course, but it takes a long time to compile data.

In fact, Plex Live TV has a relatively agnostic relationship with the concept of channels in general. Once the service has downloaded all available listings, you'll be able to see channel names and logos — in teeny, tiny font, hidden away in the bottom-right corner of a TV listing. If you want to watch a particular channel, you'll notice that finding it isn't that easy. On the Xbox app, the names and logos didn't show up at all.

To be fair, though, if you can jump over these hurdles — the need for a powerful setup, the clunky navigation — Live TV works precisely the way it's supposed to. Programs stream in real time or record just as you program them. You'll have to keep your computer running any time that you want to watch or record something, but that goes with the media server territory. (It's also yet another reason to run a media server from a Shield TV if you can, since it's always plugged in anyway.)

I don't think Plex Live TV works as well as it could just yet. On the other hand, for its intended audience, it's one more useful feature in a consistently growing arsenal. If all you want to do is watch live TV, there are simpler ways (including the HDHomeRun app, which channels content directly from your tuner and has a much prettier interface). However, if you use Plex to manage the majority of your media already, Live TV is one more useful feature of which you can take advantage.

Consider it this way: Live TV is available to all paid Plex subscribers. For $5 per month (or $40 per year or $150 for a lifetime membership), plus the cost of hardware, you can get everything you need to watch and record live network TV. Even if you don't need the feature right now, having access to it as part of a subscription you already pay could be useful down the road.

On the other hand, potential Plex subscribers may wonder if it's worth the cost. Other services — like Channel Master, Tablo and even HDHomeRun itself — offer paid DVR capabilities, too. And some of them even sell hardware with built-in hard drives, obviating the need for a constantly running computer.

It's worth pointing out, though, that the Plex app is much more widely available than the other ones I've mentioned. You can get it on pretty much any platform, including streaming players, game consoles, computers and mobile devices. That alone might make it worth the price of entry if you don't already have a platform that supports, for example, the HDHomeRun or Tablo apps.

Because I haven't tested these services against one another extensively, I can't say for certain which ones work well or which ones offer the best value. I can say, though, that Plex is a worthwhile, albeit imperfect, contender in this increasingly crowded field. If you don't already have a Plex subscription, consider what else is out there. But if there's one thing Plex knows how to do, it's gradually improve its software over time.