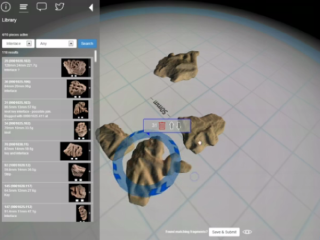 Gamers, you are needed to save history.

An intricately carved, ancient Scottish pillar lies in pieces, and researchers from the National Museums Scotland need help putting it together again.

So they digitized the more than 3,000 pieces to make a browser-based puzzle video game.

Called "The Pictish Puzzle," after the Pictish people who created the pillar, the game goes live today (Oct. 25). You can play it in your browser at pictishpuzzle.co.uk.

The pillar, called the Hilton of Cadboll Stone, is from Northern Scotland and dates back to the year 800. It was once an elaborately carved sandstone piece and appears to have celebrated the Pictish people's conversion to Christianity.

Over the years, the pillar began to fragment. The top half is now on display at the National Museum of Scotland in Edinburgh, but researchers are hoping to recreate the entire piece as it once was.

The researchers worked with both 3dei, a company that specializes in digitizing physical collections, and with a local hospital that scanned the pieces of pillar using an X-ray scanner. The digitized images were uploaded into a 3D-modeling program and turned into a game.

Researchers are hoping that people will work together to sort the pieces and begin to put them together — making this the world's biggest and most communal jigsaw puzzle.

Researchers from the National Museums Scotland aren't the first to crowdsource complicated real-world problems. In 2011, University of Washington scientists put up a browser game based on a 10-year-old question in HIV research.

Players were asked to help figure out the structure of an enzyme that behaves similarly to another enzyme that facilitates the transition between an HIV infection and AIDS.

Gamers solved that puzzle within 10 hours of it going live.