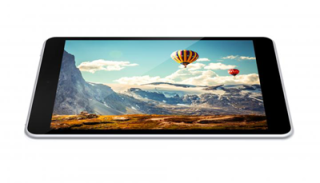 After a lot of teasing yesterday on Twitter, Nokia has revealed its first device after selling its smartphone devices and services to Microsoft. Starting at $249, the N1 tablet doesn't resemble anything Windows, but it does look pretty similar the iPad mini, with a few added features that are distinctly Nokia.

At first glance, you could easily mistake the N1 for a Apple's smallest tablet. It has the same 7.9-inch, 2048 x 1536 resolution display, but unlike the iPad mini, the N1's display is fully-laminated. (Only the new iPad Air 2's panel is laiminated). It's also thinner and lighter than the iPad Mini, coming in at 0.27 inches thick and weighing 11 ounces. The iPad mini 3 weighs 11.7 ounces and has a 0.29-inch profile.

The headphone jack, side buttons and cameras (8-MP rear, 5-MP front) are all placed in the same positions as Apple's tablet, although on the bottom Nokia has opted for a reversible Type-C USB connector to charge the device. Powered by a 2.4-GHz Intel quad-core processor, the N1 comes with 2GB of RAM and 32GB of storage and runs Android Lollipop.

The N1 features a special version of Lollipop with Nokia's Z Launcher technology. Z Launcher shows you certain apps and contacts depending on where you are and what you're doing, and it also lets you search for things quickly by drawing a letter on the screen as an alternative to typing in a search bar.

The N1 tablet will be available in Lava Grey and Natural Aluminum color options. Nokia will launch the tablet in Asian markets around the Chinese New Year (February 19), and Russian and European markets will follow soon after.

The success of the N1 tablet will likely hinge on its price, especially since Nokia is going after the newest $399 iPad mini 3, as well as the $299 mini 2. Unfortunately, there's no word yet on when the N1 tablet could come to the United States.