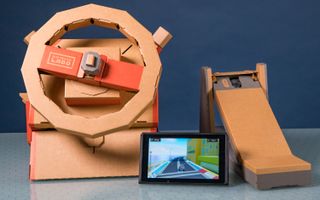 When they debuted earlier this year, Nintendo's Labo cardboard building kits proved to be fun and wildly imaginative interactive toys that let you turn your Switch into anything from a piano to a remote-controlled car. But if you were hoping to get a meaty game experience out of Labo, it probably let you down.

This $69 set lets you build and play with a variety of accessories that let you control cars, planes and submarines in a freely explorable open world filled with activities to complete. And while the experience might not be riveting for older gamers, the Labo Vehicle Kit is definitely the most game-y of Nintendo's cardboard play sets — and it can simply be a ton of fun.

As with Nintendo's Variety Kit and Robot Kit, putting together the Vehicle Kit's variety of steering wheels, throttles, keys and pedals is a snap. Thanks to the intuitive Nintendo Labo software and the smartly labeled and perforated cardboard sheets, everything just clicks together in a way that feels natural and satisfying.

My one gripe with the Vehicle Kit's building process is that almost all of the builds will take you a while. While the Variety Kit has a basic 10-minute RC car build to ease you into Labo, the Vehicle Kit's key parts start at roughly 30 minutes of building. As such, make sure you have a good amount of free time if you want to put together everything this kit has to offer.

I spent most of my time with the kit's Toy-Con Car, a fully fledged steering wheel that took about 2 hours to build, as well as its accompanying pedal, which took me a little under an hour. Once I had everything hooked up and launched the accompanying game, I felt like I had a miniature arcade in my living room. The wheel and pedal were impressively responsive as I drove a virtual car through a colorful island, and the wheel's various levers and switches had a satisfying tactile feel as I fidgeted with them.

Once again, Nintendo has managed to make magic out of little more than cardboard, some tape and the IR sensors in the system's Joy-Cons.

Once again, Nintendo has managed to make magic out of little more than cardboard, some tape and the IR sensors in the system's Joy-Cons. From the rumble at my feet when I hit the gas pedal to the clickiness I felt when twisting a lever to change gadgets on my car, everything simply works in a way that's kind of mind-boggling (for the most part, at least — but more on that later).

MORE: Switch Online vs. PlayStation Plus vs. Xbox Live Gold: Which Online ...

The actual Vehicle Kit game allows you to freely drive, fly or boat through a large open world, which consists of a variety of smaller hub areas, each with its own objectives. The missions themselves are pretty simple — find a certain amount of objects, fill up at a gas station — but these activities provide a nice number of boxes to tick off for completionists. Better yet, if you have multiple Labo vehicles built, you and a friend can explore together.

In addition to the open-world experience, the Labo software includes a variety of other activities, including a simple but fun slot-car racing game that you can play with just the pedal, as well as a multiplayer showdown mode that lets you battle in vehicles with a friend.

It's worth noting that the Toy-Con steering wheel also works with Mario Kart 8 Deluxe, which sounds great on paper but didn't work so well in practice. While driving in the Labo game felt intuitive, doing so in Mario Kart was a bit of a mess, as the game simply didn't register my turns accurately and I couldn't find an easy way to drift around corners.

While driving in the Labo game felt intuitive, doing so in Mario Kart was a bit of a mess.

As with the other Labo kits, the Vehicle Kit grants you access to Toy-Con Garage, a DIY Toy-Con creation tool that's limited only by your imagination. You can program your Switch, Joy-Con and Labo accessories to perform certain actions based on certain inputs, allowing you to make anything from a working guitar to a full-on Pong game. It's absolutely wild stuff, given you put enough time and creativity into it.

The Nintendo Labo Vehicle Kit is yet another fun DIY toy set from Nintendo, but this one offers the most traditional game experience out of the three available kits.

If you're looking to get into Labo for the first time, the $69 Variety Kit still offers a better mix of simple and advanced builds, while the $79 Robot Kit offers the most challenge for experienced builders. But if you're seeking a good middle ground between the two that's as fun to build as it is to play with, check out Nintendo's latest Labo; there are hours and hours of good times to be had creating and exploring with this kit.