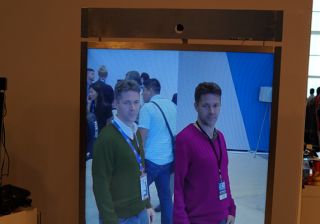 SAN FRANCISCO — The Magic Mirror has nothing on Memomi's MemoryMirror. Sure, the Wicked Queen's favorite looking glass can tell her who's the fairest of them all, but it can't reveal how she'd look in a different colored sweater the way Memomi's device can.

What's more, Memomi's mirror doesn't rely on magic. Rather, it's built around Intel's RealSense technology, which is how the MemoryMirror happened to earn a prime demo spot during the keynote kicking off this year's Intel Developer Forum.

MORE: Intel's IDF Demos: The Good, The Bad and The Terrifying

Memomi's use of RealSense also earned it some demo space at the Moscone West convention hall, where IDF attendees could see the mirror in action on their own. (They could also walk half-a-mile to the nearest Nieman Marcus; the retailer is using MemoryMirror in three of its stores, with plans to expand to around a dozen more later this fall.) I had a chance to see a demo of the mirror and was impressed by how Memomi incorporates simple gestures into its color-changing bag of tricks.

In Memomi's showfloor demo, a red sweater-clad model could admire his new look in the mirror. By closing his fist, though, he could change the color of that sweater in the mirror — first green, then purple, then other colors. If you stared closely at the mirror, you could make out a reddish hue around the sweater, but from a distance, Memomi's mirror gave you a pretty accurate view of what clothing would look like in different colors.

Memomi has a few other tricks up its sleeve. The mirror can switch to a split-screen effect, showing two colors of the same article of clothing side-by-side. Social features let you share your would-be look with friends, so they can weigh in on your fashion decisions.

Memomi's website touts other potential features for the MemoryMirror beyond color changes, including the ability to try out different patterns or add accessories. Another portion of Memomi's demo area at IDF centered around trying on different glasses without ever changing the pair you had on.

While the focus is on fashion right now, the MemoryMirror could expand to other uses — consider the mirror's split-screen feature which could be used to compare your form when exercising in a gym. For now, though, Memomi seems content to use its mirror to help shoppers compare different styles of clothing while Intel is content to tout the mirror's use of RealSense technology.