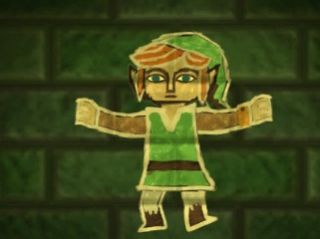 The newest Zelda game takes the franchise to a new dimension with wall-merging and other 3D features.

Playable demos of upcoming video games abound at Comic Con every year, but one of New York Comic Con 2013's highlights so far is "Legend of Zelda: A Link Between Worlds"

A demo of this newest addition to the long-running "Legend of Zelda" video game franchise was up and running at Nintendo's floor booth on both 3DS and 2DS, Nintendo's newest handheld console.

As players of the 1991 game "A Link to the Past" (to which "Link Between Worlds" is a direct sequel) will remember, earlier 2D Zelda games did have some elements of three-dimensional play. Dungeons and other areas were comprised of several floors, and holes in the floor meant players had to be aware of what was going on a floor or even two floors below them in order to navigate to their destination.

But that kind of gameplay is often called 2.5D, because the experience was still essentially two-dimensional, with some extra lines of computer code that handled moving between floors added to create a feeling of 3D.

In "A Link Between Worlds" that's no longer the case. It's genuine 3D.

New York Comic Con 2013's demo consisted of two areas, "field" and "dungeon." Each was playable for only 10 minutes, but if players reached the dungeon from the field the timer reset, allowing up to 20 minutes of play.

In the field, players start as a young boy named Link in a familiar setting: Link's uncle's house, from "A Link to the Past." There's no suggestion of what the "A Link Between Worlds'" plot might be, however; players are simply encouraged to explore, test out the controls, weapons and particularly the new "merge" feature wherein Link "merges" with a wall and becomes a drawing on its surface.

The field's flat surfaces have been rounded into gentle hills to show off the game's 3D support, but it's the "merge" feature that makes the game truly three-dimensional and truly new. Surfaces that were just visuals designed to give the illusion of depth are now playable surfaces; Link can sidle across them without the need for a floor to walk on.

The 'merge' ability became critical in the dungeon section, where players have to navigate across moving platforms and must, at times, merge with oncoming walls to keep from being knocked over by them, or merge with adjacent platforms that will lift them to newer floors.

A meter in the lower left corner depletes slowly as long as Link is in his merged drawing form. The meter also depletes when he swings his hammer (by pressing X), but replenishes itself when Link is doing other activities, so it's more comparable to the stamina bar of "Legend of Zelda: Skyward Sword" than the magic meter of other "Legend of Zelda" titles.

"Link Between Worlds" can be played on either the 3DS or 2DS handheld consoles, but the experience is slightly richer on the 3DS, which better displays the three-dimensionality of the game itself.

The "Legend of Zelda" franchise is 27 years old this year — ancient by video game standards. And many of the newer games are dominated by a sense of nostalgia for earlier titles that often outweigh any innovation the games might have attempted.

"A Link Between Worlds," however, looks like it's found that magical sweet spot between old and new. It takes a familiar setting and creatively uses new technology to make it fresh and exciting once again.

"The Legend of Zelda: A Link Between Worlds" comes out on November 22 for North American and European audiences on the 3DS and 2DS.