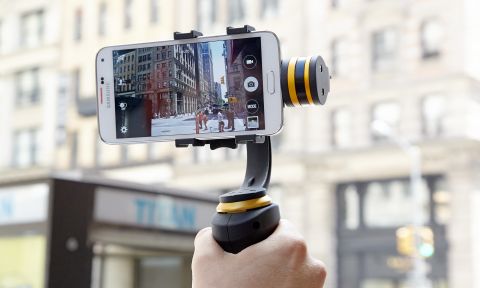 The easy-to-use Ikan Fly X3 Plus helps ensure any videos you shoot with your smartphone or GoPro will be smooth and steady.

Built-in image stabilization only goes so far in smartphones. To get truly shake-free video, especially when moving, you'll need a device such as the Ikan Fly X3 Plus. Clip your smartphone onto this $300 handheld gadget, and its 3-axis gyroscope and accelerometer will help ensure your movies are as smooth as if you were standing still.

Black with yellow accents, the Fly X3 is unobtrusive, yet has just enough flair for videographers looking for a bit of style. The Fly X3's grip is coated in a soft-touch material, making it comfortable to hold. Atop it are the gimbal, made of two rotating metal arms, and a clamp for a smartphone.

The Fly X3 accommodates phones ranging in width from 2.49 inches to 3.6 inches, which includes the iPhone 6, the 6 Plus and the Samsung Galaxy series.

Into the bottom of the hand grip slides the X3's battery, which has a power button and four indicator lights, to show you at a glance how much of a charge is left. The company says the battery should last between 2 and 3 hours.

With its battery, the Fly X3 weighs a hair over 1 pound, so it's not going to fatigue your arm, unless you're holding it for long periods of time.

The attached mount has a spring-loaded clamp, and can accommodate a wide range of smartphones. Ikan includes an additional smartphone clamp, as well as a GoPro mount and counterweight. All of this comes in a foam-lined carrying case, which also accommodates a charger.

To test the Fly X3, I held the device, in which was mounted a Samsung Galaxy S5, in one hand. In my other hand, I held a second Galaxy S5, without any other support.

In what I like to call the "Rocky" test, I filmed a runner bounding up a flight of stairs, following her for part of the way. The difference between what the Fly X3-aided S5 video recorded and the hand-held S5 was easily apparent. The former clip looked smooth, almost as if I were gliding up the stairs; the latter was bumpy and jittery, even when trying to compensate using my hand.

When the Fly X3 is turned on, the gimbal swings to life, automatically holding the smartphone level; you can feel a slight vibration as the gyroscope maintains its balance.

There are a few quirks when using the Fly X3; if you swing the grip too far to the left or right, or if you try and swivel the smartphone vertically in its mount, the X3 starts jumping around, as the gyroscope tries to overcorrect. I had to be careful when pressing the smartphone's screen (to, say, start filming) that I didn't over-adjust the angle, and send the whole contraption spinning.

I found that if I wanted to film something above or below me, I had to angle the grip itself, and the smartphone would follow; however, to keep things steady, it takes a second or so for the camera to tilt up.

MORE: Which GoPro Is Right For You?

If you're looking for a Steadicam-like setup for your smartphone, the Ikan Fly X3 Plus is a good option. It's easy to use, comfortable to hold, and best of all, keeps your shots smooth and level. For videographers, it's a worthwhile investment.