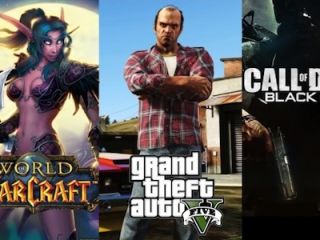 "Grand Theft Auto" raked in $800 million in sales in its first 24 hours, breaking the $500 million industry record set just a year ago by "Call of Duty: Black Ops 2." Yet, a September 2013 study by Asymco shows that overall sales for Microsoft, Nintendo and Sony consoles have been in decline since their peak in 2008. Just like with films, blockbusters prop up the games industry, analyst and consultant Scott Steinberg says.

But why has this effect seemingly snowballed, with day-one sales of big-budget, so-called AAA game releases skyrocketing over the past decade? Steinberg chalks this up to an increased awareness and healthy demand for these games over the years. But more important, properties like "Grand Theft Auto" and "Call of  Duty" have broad appeal, beyond the scope of hardcore game fans, thanks to widely approachable thematic elements, Steinberg told Tom's Guide.

MORE: 10 Cool Things You Can Do in 'Grand Theft Auto V'

According to Steinberg, it's these blockbuster releases that keep the industry going amid horrid general sales reports and doom-and-gloom studies. As consumers continue to regroup around these mega hits, will these money-guzzling exceptions become the rule, or is that alreadythe case?