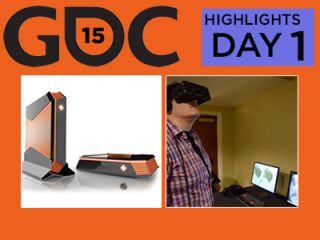 The Game Developers Conference is underway in San Francisco, and the Tom's Hardware and Tom's Guide teams are on the ground to bring you our first impressions of the most exciting new innovations. Nvidia started things off with a bang on Day 1 with its first living room console, complete with 4K support. And Sony took the wraps off the latest iteration of its Project Morpheus head mounted display for the PS4. It's coming in 2016. Here's a quick look at all the highlights.

First came the Shield portable, then the tablet, and now Nvidia wants to invade the living room with its Shield console. Powered by Nvidia's X1 superchip, this Android box plays movies and TV shows in up to 4K resolution and will stream PC titles from the cloud via the Grid service (at 1080p and 60 fps). You'll also be able to play the latest Android titles from your sofa. The Shield could be the set-top box to beat.

Check out our in-depth hands-on at Tom's Hardware and hands-on video at Tom's Guide.

Sony's revamped Project Morpheus headset for the PS4 finally has a release date - 2016 - but it's the upgrades inside that have us pumped. 120 fps performance? Yes please.

No, it's not yet another new VR headset. AMD's Liquid VR SDK lets developers tap into a series of processing advances designed to reduce latency and increase content quality. We checked it out with the latest Oculus Rift.

The Steam Machines Are Coming (Really!)

Valve's Steam Machines are finally going to launch in November, and Syber is one of many companies looking to stand out in what will be a crowded market. Get the details on their six new consoles, debuting this fall.

The trick to making a mobile game believable is the way the environment looks, and ARM's new dynamic-lighting graphics engine delivers console-quality eye candy. Take a look for yourself in two new videos.