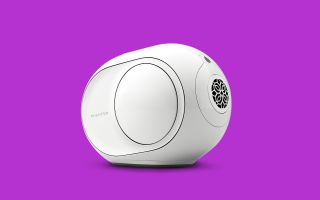 Well, this is impressive. Devialet, makers of the premium powerhouse Phantom, has gotten its incredible shrinking ray out and managed to squeeze the look and sound of its flagship device into the Devialet Phantom Reactor - a compact speaker that, despite its size, has a huge sound.

The Devialet Phantom is one of those speakers that the majority of the world lusts after but simply can’t afford. Its unique spherical chassis shape is the stuff of sci-fi movie fever dreams; its sound is jaw-dropping and - at 4,500 watts - eye watering.

It may only be three years between products but the Phantom Reactor has had 10 years of R&D to make sure the smaller version of its Phantom speaker range - a quarter of the size of the original Phantom - still packs in a decent amount of audio prowess.

Size wise, the Phantom Reactor is a diminutive 219mm x 157mm x 168mm. This means it’s possible to hold it in your hand (please don’t do that, though, as it weighs 10 pounds), but within its relatively compact frame it is capable of blasting out 900W/98db of sound.

It may not offer the 4500W/108dB fierceness of the Phantom Gold but it’s enough sound to match, according to Diavalet, that of a symphony orchestra… in your front room.

Looks wise, it’s the Phantom in miniature. It’s kept pretty much the same aesthetics but where it does differentiate it actually, whisper it, improves on build quality.

The chassis has been ‘neatened’ up, with joins no longer visible, and there’s now the addition of capacitive control buttons on the top of the device.

One of the signature parts of the Phantom is its side bass drivers that visibly vibrate while the rest of the chassis is completely still, free of vibration and distortion. This is the case once more but smaller bass drivers had to be built from the ground up in the company’s factory in France, tailor made for the new form factor.

All the smarts that can be found on its bigger sibling can be found here - including Bluetooth, Spotify Connect, Airplay, UPnP and there’s also a mini jack, optical input for connecting digital sources and Ethernet. While the size begs a stereo setup, with a speaker at either end of a television, Devialet said this functionality is “coming soon” but won’t be available at launch.

The new addition to the Phantom series means that the full-fat speaker has been given a new name: it is now called the Phantom Premier.