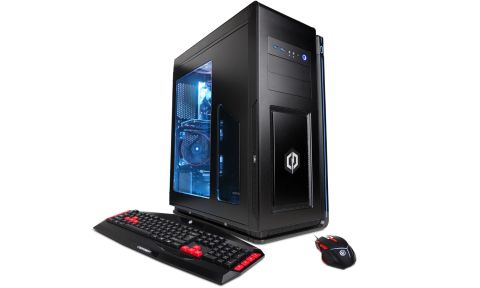 It might sound crazy, but there's a good chance your favorite Twitch streamer uses two PCs at once when broadcasting — one for gaming, one for streaming. This dual-desktop setup allows for maximum performance and convenience, though it comes at the cost of having two huge towers underneath your desk. That's where CyberPower's Pro Streamer comes in.

This beast of a gaming machine ($2,239 starting, $4,500 as reviewed) stuffs two entire PCs inside a single case, allowing you to reap the benefits of dual-PC streaming without having to buy (or make room for) two separate desktops. The Pro Streamer's preloaded streaming software and fairly painless setup process make it an excellent choice for those who want to go the two-PC route. However, you'll need to put some serious thought into whether you need that much power in the first place.

Do You Really Need Two PCs for Streaming?

Before we get into specifics, it's worth exploring the actual value of a dual-PC streaming setup. Performance is an obvious benefit, but as is made evident on this Reddit thread, many users prefer having dedicated streaming and gaming PCs for sheer convenience.

It becomes much easier to manage your streaming apps, chat with fans and monitor performance on the streaming side when you don't have to worry about constantly alt-tabbing out of your game to do so. Plus, having a separate streaming PC ensures that your stream won't get cut off in the event that your gaming PC crashes. This allows you to keep talking to your viewers while you get your game back up and running.

Still, you'll need to ask yourself how serious you plan on getting about streaming before investing in something like the Pro Streamer. If you're already making money on Twitch and have a dedicated fan base, then a two-PC setup may be a wise investment that could help you improve the experience for viewers. If you find that your current PC is on the verge of melting every time you go live, then dual-PC is probably worth considering.

However, if your streaming regimen consists of a few sessions of Minecraft per week, a single PC should suit you fine. Also, if you stream primarily console games, there's little need for a secondary PC. Finally, if the idea of having two mice and two keyboards cluttering your desk drives you nuts, you may be better off picking a powerful machine that can handily gaming and streaming at once.

As a desktop that houses two independent computers, the CyberPower Pro Streamer is appropriately huge. Still, the PC's all-black Enthoo Mini XL case is fairly sleek for its size, with curved edges and a shiny CyberPower medallion sitting front and center.

The Pro Streamer sports an eye-catching LED strip along its right edge, which you can set to glow green, blue, yellow, red or a variety of other colors with the push of a button. But the real kicker is the machine's transparent plastic side panel, which lets you admire just how neatly CyberPower managed to stuff two entire motherboards into a single case.

You'll want to make sure you have a good deal of desk space before buying this PC. At 21.7 x 18.9 x 10.2 inches, the Pro Streamer is big on its own. And that's before you connect the two monitors, two keyboards and two mice necessary to use the machine properly. Still, it beats having two separate towers in your gaming den.

For a machine with two independent PCs inside of it, the Pro Streamer's port layout is surprisingly painless. The main plug-and-play ports for the streaming PC (two USB 3.0 ports, headphone and mic jacks, and power button) are located front-and-center, while you'll find the same controls for the gaming PC tucked away in an enclave on the top-right of the desktop.

The streaming PC is powered by an MSI Z170I motherboard, which packs three USB 2.0 ports, four USB 3.1 ports, two antenna connectors, an Ethernet port, and HDMI and DisplayPorts. There's also a PS/2 port for older mice and keyboards, as well as a standard selection of surround-sound audio connections (line in/out, rear, subwoofer, mic and S/PDIF). The Z170I is connected to an Avermedia Live Gamer HD capture card, which sports two audio jacks and two HDMI ports for capturing game play from your GPU.

The Gigabyte X99M motherboard that powers the gaming portion is largely similar, though it has the extra benefit of four USB-DAC (digital-to-analog) ports, which are ideal for getting the best audio quality possible for your headphones. Attached to the X99M is Nvidia's snazzy new GeForce GTX 1080 graphics card, with its usual HDMI port, DVI port and three DisplayPorts.

Both motherboards and their respective attachments are laid out in a way that makes it easy to distinguish between the two. Better yet, the capture card and graphics card are just inches apart, so you won't need a superlong HDMI cord to set up your game-play feed properly.

Accessing the Pro Streamer's components is just as free of headaches. After removing two hand screws in the back, you can simply slide off the side panel and tinker with the machine's graphics card, RAM slots and storage bays as you see fit.

Setting up the Pro Streamer may seem daunting, but the streaming PC portion comes preloaded with a handy PDF guide that clearly outlines where to plug in all your gadgets, as well as how to configure your streaming software.

For starters, you'll need to connect a dedicated monitor, keyboard and mouse to both the streaming and gaming PCs. Your streaming monitor can connect directly to your streaming motherboard, while you can hook up your gaming monitor to the capture card (which, in turn, is connected to your GPU via HDMI).

There are various ways to ensure you hear audio from both PCs. For example, you can connect a 3.5mm cable between the gaming PC's analog-out port and the streaming PC's line-in port, or use an audio splitter (sold separately) to bridge the gaps among your headphones, the game audio and your stream audio.

To test the Pro Streamer's live-streaming chops, I broadcast a few sessions of Rise of the Tomb Raider and Street Fighter V to Twitch, with both games cranked to their max settings at 1080p.

When I broadcast from the streaming PC while letting the gaming PC handle the games, the main PC's overall usage hopped between 30 and 40 percent. I didn't experience any noticeable slowdown on either the streaming or gaming sides. Most importantly, I could play my games at a smooth 60 fps even while live.

Interestingly, when I streamed exclusively from the gaming PC, the CPU usage was almost identical. This may have something to do with the beastly specs of our model on the gaming side, which included an Intel Core i7-6850K processor, 16GB RAM and Nvidia GeForce GTX 1080 graphics. Our unit's streaming portion is more modest, packing an Intel Core i7-6700 CPU, 8GB of RAM and integrated graphics.

Still, I had a much more pleasant experience when taking advantage of the Pro Streamer's dual PCs. Having an entirely separate PC for streaming meant that I never had to exit or pause my game when I wanted to make changes to my streaming app, or keep tabs on my Twitch viewers.

The Pro Streamer's gaming portion scored a whopping 22,190 on the Geekbench 3 overall performance test, outperforming the desktop's streaming PC (15,729) as well as our 15,579 average for gaming desktops. With that in mind, the Pro Streamer may be especially useful for those who can't afford to go all out on the gaming half of the machine.

A machine like the Pro Streamer is useful only if its gaming portion can handle modern games at high settings, which was no problem for our configuration. Packing Nvidia's monstrous new GeForce GTX 1080 GPU, our Pro Streamer allowed for consistent 60-fps rates in Street Fighter V at max settings, while also proving its worth in more demanding benchmarks.

Cyberpower's PC had little issue rendering the beautiful landscapes in the Rise of the Tomb Raider benchmark, turning in a strong 45.8 fps at max settings at 4K resolution. We got a smoother 59.9 fps when we lowered the resolution to 2560 x 1600.

The Pro Streamer produced a steady 48.33 fps when running the notoriously chaotic Metro: Last Light benchmark on max settings at 2560 x 1600. However, the machine finally faltered at 4K, with a slightly less-than-playable 26.33 fps.

The Pro Streamer packs just enough preloaded software to help you get right on your quest to Twitch stardom. The desktop provides instant access to Open Broadcasting Software (OBS) and XSplit, the two most popular apps for streaming to places such as Twitch, YouTube and Facebook Live. Both programs worked well for me; I'm a fan of XSplit's intuitive interface, but the open-source OBS offers all of its features for free, whereas some of XSplit's required a paid license.

There's also Avermedia's own ReCentral app, which lets you stream or record game play with a single tap, thanks to a large, USB-based recording button that comes with the capture card.

CyberPower offers three core configurations of the Pro Streamer, which you can customize as you see fit. The I100 model ($2,239) packs an Intel Core i5-6000K processor, 32GB of RAM, an Nvidia GTX 1070 graphics card, a 120GB SSD/2TB hard drive combo and a Gigabyte GA-Z170MX gaming motherboard.

The CyberPower Pro Streamer ($2,239 starting, $4,500 as reviewed) is a machine that fills an extremely small niche exceptionally well. If you're a serious Twitch or YouTube streamer and are considering getting dedicated streaming and gaming PCs, the Pro Streamer lets you have both machines in a single box while making the setup process as painless as possible.

The desktop's Core i7 CPUs are more than ready for smooth streaming, and its GeForce GTX 1080 GPU can handle high-end games without a sweat. It certainly doesn't hurt that the desktop packs popular streaming apps OBS and XSplit right out of the box.

While the Pro Streamer may save you some space and cash compared to buying or building two separate PCs, you'll ultimately need to consider whether you need a dual-PC setup at all. If you're just looking to get your feet wet with streaming, you'll be just fine on a single PC with decent specs. If ultimate control and convenience is what you're after, however, there's a lot to like about what CyberPower has pulled off.