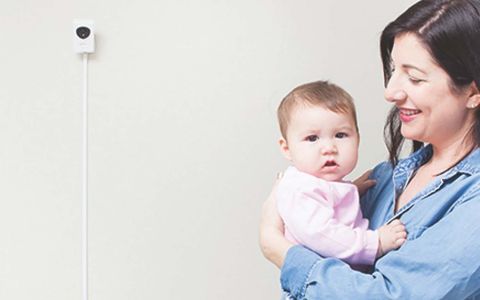 If you're the kind of parent who checks on the baby every 15 minutes, the breathing-detection feature of Cocoon Cam Plus just might help you relax.

A lot of baby monitors show you a night-vision video — accompanied by audio — of your sleeping babe. It's usually good enough to tell if your kid's awake or crying, but sometimes the details are a little fuzzier. On the other end of the spectrum are under-mattress sensors and wearable monitors, which I'm sure are the answer to some data-hungry parents' prayers, but not necessarily for everyone.

The $150 Cocoon Cam Plus splits the difference. It's an HD camera with excellent night vision that uses sophisticated motion detection to reassure you that your baby is breathing. That way, you don't have to keep tiptoeing in to check on him when there's dinner to eat or TV to watch.

The white plastic Cocoon Cam Plus needs to be mounted to the wall above the center of the crib with the provided screws and anchors. This is essential for its key feature — monitoring your baby's breathing — but it makes setup a lot more involved than just plugging in a monitor and setting it on a shelf. The black ring around the camera's lens rotates in case you need to fine-tune its focus.

Keep in mind, the Cocoon has to stay plugged in all the time. Luckily, my son's room had a free power outlet on the same wall, and I wound up taping the cord down so it wouldn't just hang — not the best look! The company sells a $20 cord-cover kit that you can paint to match the walls for a more permanent solution.

I had some trouble with the Cocoon Cam Plus setup, requiring me to repeat the process a few times before the camera finally got online.

Once it's mounted, you'll pair the Cocoon to your 2.4GHz, WPA2-secured Wi-Fi network. The Ethernet port on the back of the camera seems silly, since chances are slim that your router is within cable distance of your nursery. But that port is just for setup. Once the camera is connected to the Wi-Fi, it runs wirelessly, save for the power cable.

I had some trouble with the setup, requiring me to repeat the process a few times before the camera finally got online, but Cocoon was very helpful. It even sent me an email to check in when it noticed I'd registered for an account in the app but hadn't succeeded in hooking up the camera. Once everything was up and running, the camera mostly stayed connected, reconnecting relatively quickly when it (very) occasionally lost the Wi-Fi signal.

Another ding on the Cocoon's design is its always-on blue LED indicator lights on the back and faint glow of red lights near the lens when the automatic night vision is on. While they don't put out a ton of light — certainly not enough to keep a baby up — I was tempted to cover those blue ones on the back with black electrical tape.

Cocoon's marquee feature is the breathing detection, which I appreciated a lot more than I thought I would. And although you shouldn't confuse the Cocoon Cam with a medical device,  seeing your child breathing peacefully on the screen might make you less tempted to tiptoe into her room for a look, and then trip on something or stub your toe and wake the little angel up.

The Cocoon Cam doesn't include a temperature or ambient-noise sensor  — notable omissions since those conditions can affect how long the baby sleeps. (Those features appear to be coming to a new version, Cocoon Cam Clarity, due out later this year.) You could add a third-party temperature sensor to your baby's room, but you'd have to collect that data from a different smartphone app. (The Eve Degree, for example, supports Apple's HomeKit protocol, so you could just ask Siri for the temperature in the baby's room whenever you were curious.) Our top pick for video monitors, the Arlo Baby, has onboard sensors to detect temperature, humidity and air quality, but it also costs $70 more than Cocoon Cam.

The main screen of the app displays the live view, with a cool breathing graph along the bottom when your baby is asleep and breathing peacefully. The graph gets interrupted when the baby stirs, since the breathing detection is based on movement, but it starts right back up again when the tot settles back down. Buttons on the bottom let you control the two-way audio or open the activity log, which features time-stamped videos of the baby falling asleep, waking up or crying.

The Cocoon Cam app creates daily "Swaddle Stories" videos, too — they're a mix of images and video clips, forming ind of a highlight reel of your baby's night of rest. Like the activity log videos, they're kept for seven days with no subscription fee required, and easy to download or share if you'd like to keep them longer. It's a cute feature, sure. But the app doesn't let you manually capture a video or a snapshot (other than device screenshots, of course) if you see something adorable happening on the live feed.

When you see your baby breathing peacefully on the screen, thanks to Cocoon Cam, you might be less tempted to tiptoe in and look at her.

Besides the live feed, activity feed and swaddle stories, Cocoon's app is very bare-bones. That's good on one hand — the interface isn't cluttered — but it still feels like a few things are missing, like a link to the FAQ page on Cocoon's website, or the lens-focusing advice included in the paper manual. You can add multiple cameras to your account and view them in the same app, and add up to four caregivers — grandparents, nannies or babysitters, say —  who can view the cameras on their own devices.

The 720p HD camera's night vision is pretty tremendous. Because of where the camera's mounted, the detail is fantastic. My son is much larger than a baby at this point, and sleeps with a comforter and about 30 stuffed animals, but it was able to detect him breathing virtually all night long. Cocoon says its camera should work with swaddled babies, and based on my tests, I believe it.

My son had a nasty cough when I tested the camera, which the app detected as crying. But I was happy to get the notifications, so I could see in the morning how much he coughed the night before. After all, unlike crying, his coughing doesn't always wake me up two rooms away. The app also reliably sent notifications when he was waking up.

I did get one breathing-change notification when his body was completely buried under blankets and a hefty plush Bernese mountain dog. Happily, the kid was still breathing, but it was nice to see the notification trigger so I would know to check.

Even better, all the notifications come with a photo attached, which gives you far more information than a couple lines of canned text ever could. I'd like a nicer notification sound, or better yet a selection of sounds, but that's a small complaint.

The Cocoon Cam is a decent value at $150, assuming you're cool with wall-mounting it above the crib and settling for 720p resolution when more expensive cameras are offering 1080p footage. Still, the night-vision image is clear, and pairing it with a soothing live graph of your sleeping angel's breathing should do a lot to help calm the nerves of anxious new parents. Once the kids are awake, you're still on your own.