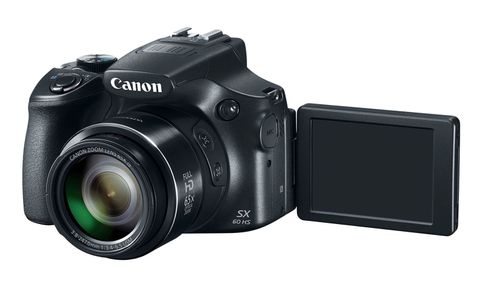 With one of the longest zoom lenses available and solid image and video quality, the PowerShot SX60 HS is the ultrazoom to get.

The Canon PowerShot SX60 HS ($479) packs one of the longest zoom lenses for a bridge camera: a 65X (21-1365mm, full-frame equivalent) range that's mind-blowing in action. This camera doesn't boast the biggest spec — that's the 83X of Nikon's Coolpix P900. But the real-world difference is minimal, and Canon manages to squeeze all this zoom capability into a camera that looks more like a DSLR and less like, well, a cannon.

The SX60 captures fine color and detail for a camera in this class. The controls are excellent, and the camera has great advanced features not found in rivals, including an external mic jack, a hot shoe for an external flash and the ability to capture photos in the RAW format. It achieves all this at a comparatively good price, too. That's why its our favorite super-zoom among our best bridge cameras.

The SX60 HS is as easy as a small DSLR to carry along: It's about the same size, at 5 x 3.7 x 4.5 inches and 1.4 pounds (contrast that with 5.5 x 4.1 x 5.5 inches and 2 pounds for its Nikon rival, the P900). It has a natural-feeling right handgrip and a nice clicky adjustment wheel behind the shutter button. The 3-inch rear LCD flips out to the left and can then rotate 170 degrees for shooting selfies or holding the camera high or low.

The 640 x 480 electronic viewfinder is a prerequisite for shooting on bright days, and holding it up to your eye helps keep the big zoom steady. The camera sadly lacks a light sensor that would allow it to automatically switch on the EVF when you raise it to your eye. You have to click the DISP. button on the camera instead, something I never got used to.

Tapping the FUNCT. SET button on the back of the camera brings up Canon's excellent X-Y axis on-screen menu. Click up and down to select key image settings such as ISO or light-metering mode, then click left and right to change the setting. You can somewhat customize the look of the on-screen menu and reprogram the features that several shortcut buttons call up.

Let's start by clarifying just how amazing a 65X zoom lens is, bringing into intimate view things you wouldn't even know exist if viewing with the naked eye. The SX60 HS loses the specs war to the 83X zoom in the far heftier Nikon P900, but the differences aren't noticeable in most cases, as you can see in these images of the Queen Mary. Below is a photo at the SX60 HS's widest setting (21mm).

The next two photos show the maximum zoom for each camera: 1365mm for the SX60 HS (left) and 2000mm for the P900. It's not much of a difference, and the trade-off for the smaller dimensions of the SX60 HS is a good bargain.

You can even dabble in astrophotography, as in this handheld shot of the moon.

The SX60 HS captures great images by day, with true colors — evident in this reconstruction of a Roman villa in Los Angeles shot at the camera's widest setting.

Detail remains quite sharp in this shot about halfway through the zoom range (left), and reasonably good even at the end of the zoom (right).

Detail and shading are excellent in close-ups, as below.

All these quality observations fall apart if you enlarge the images close to their true, pixel-for-pixel size. The physics of packing in such a long zoom lens require using a tiny image sensor: a 16-MP chip measuring 6.17 x 4.55mm, about 9 percent that of an entry-level DSLR's. This doesn't hurt photos displayed even at the high end of online sizes, though. (I gauged photos full-screen on a 2560 x 1600 retina display of a MacBook Pro; full resolution for the photos is 4608 x 3456.) But viewing them closer to 100 percent reveals a mottled appearance even when shot under ideal lighting.

Canon made the call to leave this look in rather than smooth it out, which would blur some detail in the process. The best thing is that the SX60 HS can output both highly compressed JPEGs and data-rich RAWs, which photo purists can heavily tweak in programs like Photoshop to balance detail, smoothness and other attributes. I was hard-pressed to improve on the Canon's built-in image processing, however.

The small sensor is more an issue in dim light at higher ISO settings. Images from the SX60 HS start losing a lot of detail (even displayed at small sizes) beyond the moderate ISO 800 setting. You can see what is lost in these two twilight photos: at ISO 100 on the left and ISO 800 on the right.

The SX60 HS video is capped at 1080p resolution and 60fps (no 4K/UHD), but it's perfectly fine for online posting, with great detail and color, as this clip of a garden fountain shows. Especially impressive is what you don't see: wavy moiré patterns in the window screen that littered a clip shot with the Nikon P900.

Sound from the built-in microphones is crisp, as long as the breeze doesn't kick up. Because the SX60 HS includes a jack for an external microphone, the camera can be set up to capture higher-quality sound than the majority of consumer cameras, which have only built-in mics.

Video is quite good at high zoom as well. I shot both stills and video of jet skiers about a half mile off the shoreline. For perspective on how far away they were, consider this wide shot of the scene, in which you can't even see the skiers.

Now check out the video shot at about 630mm.

As with still photos, the SX60 HS video falls short in low light — rather dramatically. You can see that in these back-to-back clips shot simultaneously, the first with the SX60 HS and the second with the superior (by low light) Nikon P900.

One of the best features for video is the SX60 HS' powerful autofocus mode, called Tracking AF. Just set the autofocus box on the screen over the subject you want to track and press the shutter halfway to lock on your subject. The feature worked amazingly well for keeping the white-and-brown dog sharp as he scurried around the beach with his pals.

No camera is perfect, but the PowerShot SX60 HS strikes a great balance of features, with rich color and detail in photos and video, good autofocus, an intuitive user interface, and power features like RAW image capture and mic jack. If you must have the longest zoom, the pricier Nikon Coolpix P900 will deliver with comparable image quality to the Canon, Otherwise, the SX60 HS wins for a compact design that packs in one of the longest zooms in the business, and the price is right.