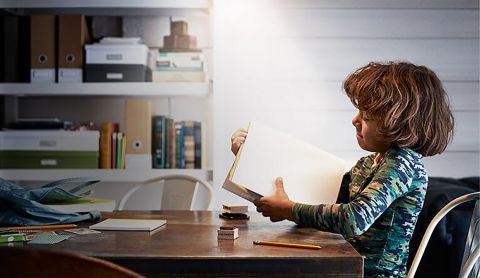 GE’s smart bulbs cost more, but do less than the competition.

As the company whose founder invented the light bulb, it's only natural that GE has its own line of smart bulbs. While it doesn't have the catchiest name, the C by GE C-Life Starter Kit lets you control its lights using your smartphone, or with Alexa or Google Assistant. (Support for Siri is coming soon.)

Unfortunately, these bulbs lack the innovation Edison was known for, and are mere shadows of less expensive competition from Philips and Sengled.

As with most smart light starter kits, the C by GE C-Life kit comes with two bulbs and a bridge (called the C-Reach). Like Philips Hue and Sengled, the C by GE lights require a bridge to connect them to your Wi-Fi network, which allows you to control them using your smartphone. Unlike its rivals, though, GE's bridge is wireless, and does not need to be plugged into your router, which eliminates a potential problem.

After creating an account and downloading the C by GE app, you have to select the devices that you want to set up. You first need to connect the bridge to your Wi-Fi network, and then set up voice control with Alexa and Google Assistant (this step is optional). Next, you have to link the bulbs to the bridge; the bulbs will flash to indicate they've been connected. It was all pretty straightforward, and took no more than 5 minutes to complete.

Along the top of the C by GE app are several scenes (including Wake Up, Bedtime, Get Home), which you can set up to have the lights turn on and off at specified times.

The home screen displays your connected bulbs, and lets you group them so you can control them en masse. Here, you can dim the bulbs using a slider, but you have to go to a separate page first; it would be more convenient if it was all on the same page.

The bottom of the screen has icons for Scenes, Bulbs and Schedules, the last of which lets you turn groups of bulbs on and off at specified times, or trigger a scene to turn on at a certain time.

However, GE's app is missing two key features found in the Philips Hue app: The first is the ability to have the lights turn on at sunset or sunrise; the other missing feature is geofencing, so you can have the lights turn on automatically when you arrive home, or turn off when you leave. A GE representative did not have specifics on when these features would be added.

While you can control the C-Life bulbs using either Alexa or Google Assistant (with HomeKit coming soon), GE's bulbs lack any other smart-home integration. For instance, Philips Hue also works with HomeKit, Nest, IFTTT and more, and the Sengled Element bulbs also connect to several more smart-home systems.

I initially set up the C-Reach bridge in my attic, which had to connect to a router (a Linksys EA9300) on the first floor. Unfortunately, the bridge had trouble maintaining its connection at that distance, so I had to move it down a floor. Otherwise, the bulbs responded promptly to my commands.

GE's C-Life lights cannot change color, but the C-Sleep lights are tunable white bulbs; that is, you can adjust them from a cool white in the morning to a warm white in the evening. That's a useful feature, but they're poorly named. Who sleeps with the lights on?

GE's C-Life smart lights work well enough, but they cost much more, and do less, than Philips Hue lights. I like that GE's bridge doesn't have to be physically connected to my router. But other than that, there's not much to recommend these bulbs over Philips' and Sengled's bulbs, which work with more smart-home systems, and have more features in their apps.