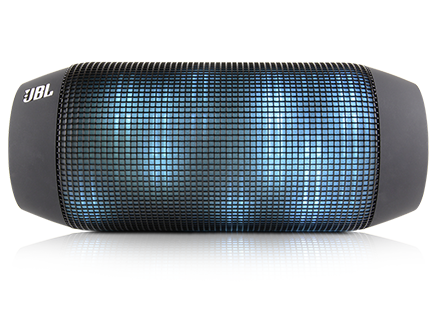 The JBL Pulse's LED lights are a treat for the eyes, but the sound is just average.

When you want a party started quickly, the JBL Pulse steps up the action by adding sight to sound: The $200 portable Bluetooth speaker is wrapped in LED lights, making it a portable light show. Though the sound and features don't stand up to the best Bluetooth speakers in its price range, the addition of lights brings a level of fun not found in competing devices.

The Pulse's big draw is the set of LED lights that wrap its 7.15 x 3.22-inch cylinder. The light shows come in a variety of patterns and colors, ranging from rainbow (a swirl of all colors) to fog (a slow bubbling effect that makes the Pulse look like a digital lava lamp. You control the light show by pressing the buttons on one end of the speaker or using the free JBL Music app for iOS or Android.

Unfortunately, the lights don't react to the music — they are just preset patterns. Even with that drawback, the lights add an extra layer of enjoyment when you're listening to music, whether with a group of friends or just chilling by yourself.

Though similar in shape to the 2.6 x 7.1-inch UE Boom, the Pulse is slightly fatter and a bit too wide to hold easily in one hand. But unlike the UE Boom, it doesn't roll away as easily, thanks to the rubber footing on one side. Surprisingly, it's a little lighter than the UE Boom, weighing 1.1 pounds versus the UE Boom's 1.2 pounds.

The Pulse lacks a speakerphone, which usually comes standard on portable Bluetooth speakers at this price level, and it isn't waterproof like the Fugoo. It's really all about the lights.

The Pulse paired quickly with iOS and Android devices over Bluetooth. If you're using an Android that supports NFC, you just need to touch the speaker and the mobile device together for the fastest pairing — you'll see a pop-up on your mobile device that asks if you want to pair it with the speaker.

To connect manually, set the Pulse to discovery mode by touching the Bluetooth button near the power button on one end of the unit. On an Android device, you just have to go to Settings and look for the speaker listed in Available Devices. In iOS, go to Settings > Bluetooth, where the JBL Pulse should appear under Devices.

The Pulse also features a 3.5mm auxiliary input for connecting directly to your device's headphone jack. This option is good if you don't have Bluetooth or want to conserve battery power.

If you want to change the Pulse's light modes and create custom effects, you'll need to use the JBL Light editor app for Android and iOS. The editor lets you easily modify the existing settings to change the colors, intensity of light and speed at which the light moves — just move the slider on each setting to adjust it.

You can also use the app to play music from your library, but we wish it also included an equalizer.

While the lights are the biggest draw, that's only part of the package. When it comes to audio, the Pulse is good, but it doesn't beat the best-sounding speakers in this price range. The Pulse includes two 40mm drivers to pump out the sound and a bass port to help boost the low end.

Thanks to a strong emphasis on midrange tones — where most vocals live — the Pulse brought Lorde's lyrics on "Team" to the front, making it easy to sing along. But the Pulse lacks the bass oomph that top performers such as the Fugoo Style and the Klipsch Gig pump out. The result is a thin sound on the saxophones in Charles Mingus' jazz classic "Goodbye Pork Pie Hat," and weak strings and horns on Mendelssohn's overture to "A Midsummer Night's Dream."

But the Pulse has a definite edge when it comes to pure volume. Rated at 6 watts per driver, this speaker can get loud — which may be more important than sound quality when the party gets going. That's twice as loud as the Fugoo speaker, which has 3 watts per channel.

The cost of the lights comes in battery life: JBL says you'll get 5 hours of playback on a full charge with the lights in use. We tested the speaker for several hours over the course of a week, and the battery-level indicator still showed three-fifths left, so you may be able to get more than the rated runtime.

You can also shut off the lights and get more battery life (JBL claims 10 hours), and we recommend doing so when you're using the speaker in bright daylight, when you can't really see the lights anyway. But even 10 hours still pales in comparison to the UE Boom's 15 hours on a charge or the Fugoo's astounding 40 hours.

The JBL Pulse is a treat for the eyes, if not the ears. If you're interested in sound quality, you should consider the Fugoo, which offers an excellent balance of treble, midrange and bass, not to mention speakerphone capabilities, all in a waterproof package. But if you think visuals are as important as sound, the Pulse is certainly loud enough that it — and you — will be the center of the party.