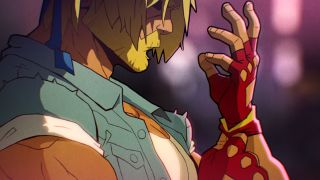 Every year, PAX East sees small indie developers and massive AAA studios alike show off their latest games to a dedicated group of fans who make the trip up to Boston for a weekend full of gaming, panels, and good times. As such, it’s the perfect place for us to get a first look at some of the weirdest, most stylish and most incredible video games you’ll get to  play soon. Here are some of the games we played that stole the show and that you should keep on your radar for 2019.

When President Blake Orama is kidnapped by a group of Ninja terrorists, three heroes need to kick, punch, and bodyslam their way through swathes of thugs, crooks and of course, ninjas to rescue the commander-in-chief. Treachery in Beatdown City is a hybrid RPG/beat-em-up that oozes in 8-bit style with a solid chiptunes soundtrack and deceptively deep combat that incorporates a clever combo system. Get ready to suplex some fools later this year on Nintendo Switch and Steam.

Warsaw is a haunting and emotional turn-based RPG that takes place in Nazi-occupied Poland as a ragtag group of rebels try to push the invaders out of their homeland. Your objective is to keep the momentum of the uprising up by completing assignments and going on patrols. The most striking thing about Warsaw is its mood and art style. Its colorful and beautiful character design makes you more emotionally invested in the members of the Secret Army. It’s a tragic real-life story that focuses more on the victims and survivors of the conflict and doesn’t sugarcoat the horrible cost of war. Expect to do your part to save your city later this year on PS4, Switch, and Steam.

This action-RPG takes place in a fantastical world where all the animals do Kung-Fu and mutations due to radioactive exposure are all the rage. Cap this off with over-the-top weapons and skills like a rocket-powered gauntlet that'll punch through walls or a mucus barrier that seconds as a bouncy hamster ball and you’ve got a recipe for some action-packed badassery. Biomutant lets players re-code their character’s DNA to adapt to different scenarios, so before you know it you’ll be growing some very interesting body parts. Biomutant is a weird, fun time that’ll make you feel like a boss. You can get your hands in later this year on PC, PS4, and Xbox One.

If the thought of finding fully-cooked turkeys inside industrial barrels makes you smile, you’re probably excited that Streets of Rage is coming back, One of the biggest nostalgia trips of this year’s PAX East was seeing Streets of Rage 4 in motion. Axel and Blaze are back in all their perfect 90s glory as mop up the streets of colorful trouble makers in mohawks and questionable fashion choices. It’s been over 20 years since Streets of Rage got a proper sequel and it’s a relief to see it play almost identically to the classic game. What does stand out is the incredible 2D art style, which delivers awesome-looking lighting effects on your flaming uppercuts and silky smooth animations.

Katana ZERO is an super-hard sidescroller with an assassin who uses drugs to slow down time that just oozes retro-futurist cyberpunk style right down to the VHS-style tracking that appears on the screen. Fans of Hotline Miami will feel right at home with the challenging foes and thumping synth soundtrack, though the game stands out with features such as mission-altering dialogue choices and a dope neo-noir mystery and of course, murder. Katana ZERO encourages trial-and-error gameplay leading to some really epic looking runs once you finally make it through.  Live your best hired-killer life on Nintendo Switch and PC later this year.

Let’s be honest, have you ever worked a retail job and wanted to slap a customer? The developers of the VR game Mister Mart assume the answer is yes. Here you play the role of a grocery store clerk in charge of processing returns. The rules are simple: customers will walk up with a return and you have to take the item, toss it in the bin, and slap the customer out of the way to deal with whoever is next in line. Before you know it, you’ve got dozen of angry customers and not enough hands to slap people. The game even turns up the dial to 11 by restricting what items you can return as you compete for the top score on the leaderboards.

The developers of Tiny Metal once again took it upon themselves to make another Advance Wars inspired game since Nintendo refuses to make one themselves. Tiny Metal: Full Metal Rumble brings more maps, units, and an epic story by Hirotaka Inaba and the music by Tomoki Miyoshi of I am Setsuna fame. The Dinoldans are attempted to unearth some ancient, dangerous tech that’ll bring untold destruction to the world and it’s up to the White Fangs to stop them. The turn-based strategy will test your resolve and resource management in addition to your noggin.  You’ll once again put on your commander hat later this year on Switch.

Another year, another plea to the powers that be to release this game already. Tunic is an action-adventure game with an adorable fox who has a thing for exploring dungeons. The world is a beautifully rendered place that is just a joy to inhabit even if there are equally adorable monsters trying to kill you at every turn. If the Legend of Zelda was your favorite game growing up then Tunic’s puzzle dungeons and fun boss fights will make you annoyed that this game isn’t out yet.

Dating is hard. Dating is even harder when your potential love interest is a moody broadsword. Boyfriend Dungeon is part-dungeon crawler and part-dating sim. Your Bae Blades are dreamy (and single) hunks you can take on dates who are also weapons. The way you’ll pay for these dates is by killing monsters with your Bae Blade. As you take out monsters, the stronger your relationship with each Bae Blade becomes which means more skills and more importantly, better more elaborate dates become available in their human form.

Should we be surprised that Hell has a dive bar run by Satan? In Afterparty, two best friends have found themselves mysteriously stuck in Hell forever. The only way to escape is to find a way to outdrink Satan. This narrative adventure game has you exploring Hell, making friends and enemies with demons which all your choices affecting the state of Hell and take part in various misadventures in your quest to beat Satan using bar hijinx and hopefully getting a free pass out of the Hell and also drinking devilish cocktails that give you special abilities.

This arcade racer focuses on big risk, big reward style driving. Being an aggressive driver will not only score you more points but will also make you go faster. Crashing into your rivals is encouraged in this game that feels like a mix of Outrun and Burnout Paradise. You’ll be blown away by the sense of speed as you whiz by these hyper-realistic courses. There are dozens of events and race types and even a hot pursuit mode where you play a cop chasing down what we are assuming are speed criminals. One awesome feature is the ability to integrate your favorite Spotify playlist, which should inspire some irresponsible driving. Get ready to step on it on April 9th on the Xbox One, PS4, and PC in April.