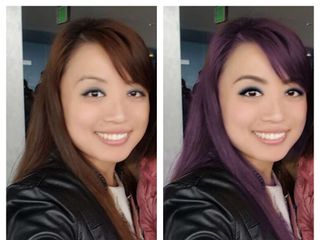 One tap for smooth skin, one swipe for a slimmer face. A dash of color, brighter eyes, and voilà! The perfect selfie. You don't need Photoshop. Now anyone can use their smartphone to turn mediocre self-portraits into stunning, glamorous Instagram-worthy shots.

It's easier than ever to make yourself look good online, thanks to the plethora of apps that let you perform digital plastic surgery without much skill. Making sure your selfies look good is so important that some smartphone cameras even do it for you automatically.

And everyone, from Beyoncé to Kim Kardashian to Miranda Kerr, is doing it. If a supermodel like Kerr needs to perfect her portraits, what hope is there for the rest of us mere mortals?

Putting your best face forward in the digital realm is essential today. Be it getting a job, finding a date or making friends, the online world is where everything happens. The Tinder generation prizes looks and photos above everything else, and having a prettier pic could put you above the competition.

But is fixing your selfies ethical?

Consider the Intent and Extent

If you're editing your portrait with the aim of deception, you might want to think twice.

"The way I see it, the essential factor is your intent," said Randy Cohen, author of The Ethicist column in the New York Times from 1999 to 2011.

MORE: How to Take the Perfect Selfie

"If your intention is to deceive, or to involve other people, that's when at least the possibility of unethical conduct can stand," Cohen said. In those situations, such as catfishing (pretending to be someone else to lure and befriend another person online), it is easier to determine that the offender was being unethical.

Another easy way to tell if an edited selfie is deceptive is how different it looks from the original subject.

"If you alter your appearance so that you're not immediately recognized," said Cohen, "then you're being deceptive and giving other people a false impression and it's a kind of lie." The greater the difference between what you look like and your edited selfie, the more ethically risky it gets.

But not everyone is heavy-handed when it comes to selfie beautifying. In fact, the best editors, just like the best makeup artists, know how to enhance a face just enough so that it looks gorgeous and still remains convincingly natural.

That's where the situation gets gray.

No Different Than Dressing Up for a First Date?

Everyone wants to make a good first impression, except today a first impression is a Facebook or Tinder profile picture. Touching up your selfies to make yourself look like you on a good day is akin to picking out the best outfit and getting your hair and makeup done before a first date or job interview.

"It's your first date with someone, you fix yourself up -- is that being deceptive or is that just making an effort? I would say both," Cohen said. You don't keep up these appearances after you've snared your partner and have settled into a relationship. "Now that I've hooked her, now I can go back to being a slob," Cohen said.

Society isn't in a tizzy over the deceptive nature of first dates -- people know what to expect and are prepared for partners to change after the first few meetings.

Is it fair, then, to expect an online match to look different from his or her profile pictures in real life?

"Any online self-presentation sites [such as dating sites] really should - and probably do - carry an implicit warning of Buyer Beware," said Larry Gross, a professor at the University of Southern California's Annenberg School of Communication and author of "Image Ethics in the Digital Age."

That means that you should probably assume that the pictures you see on OkCupid, Tinder, Facebook or Instagram have been enhanced.

But there's something more insidious behind this assumption.

It may seem like you're not hurting anyone by touching up your portraits, but Cohen believes that at some point, it contributes to a greater societal harm. If these enhanced selfies keep getting passed off as what people normally look like or if society assumes a new baseline for what looks "pleasant" or "regular," it could be detrimental.

"It's raising the bar for what's called normal," argued Cohen. "Every time someone lies, beyond the harm it does to the person you lie to, it harms the entire culture because it means we each have a tiny bit less trust in everyone else."

There is a stigma associated with getting caught posting a doctored portrait, but that's only if you're found out. If Kerr, Kardashian and Knowles had gotten away with their alterations, they would have set unreasonable higher standards for impressionable followers.

"It makes the superficial look more of a standard," said Sarah Maria, body image expert and author of "Love Your Body, Love Your Life." Maria believes the selfie-editing fad is part of an existing and growing obsession with youth and what she calls superficial images. "In isolation, I wouldn't say it's inherently destructive, but as a package, it is symptomatic of a problem in this country."

The problem, Maria said, is a fixation on outwardly appearing better and younger than we are. "Everybody's obsessed about looking Photoshopped."