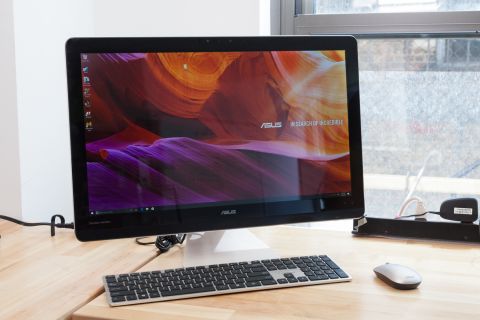 In the PC world, there sometimes seem to be only two sorts of systems: There's the budget-friendly machine that achieves its price through cutting corners. And then there's the maxed-out performance monster designed to impress reviewers and enthusiasts, but that's too expensive to ever show up in the average home.

Thankfully the Asus Zen AiO Pro Z240IE ($1,799 as reviewed) lands in that rare middle ground, offering you a capable all-in-one PC that combines a 4K display, strong performance and a healthy amount of storage without pushing into crazy pricing territory. Throw in discrete graphics and features like a touch screen and USB Type-C connectivity, and you've got one of the best all-in-one PCs for most any use.

The Asus Zen AiO Pro Z240IE is one of the slickest-looking all-in-one PCs on the market, not the least because it's willing to borrow liberally from Apple's iMac. The slim desktop has a glass and metal design, with a thick, black bezel around the display and a curved back panel that's made from a single piece of aluminum. A solid, L-shaped stand raises up the 23-inch all-in-one, allowing you to adjust the angle of the display but not the height. The aluminum chassis and stand have a brushed-metal finish and get a bit of color that Asus calls "icicle gold."

On the right are 3.2mm jacks for headphones and microphone and an SD card slot, while centered behind the desktop stand are the power connector, a Gigabit Ethernet port and a Kensington lock slot.

While the ports-on-back design is fairly common for all-in-one systems, it does mean that you'll need to fumble around a bit whenever you go to plug in a cable or peripheral device. The addition of an HDMI input is a nice touch, since it allows you to use the all-in-one as a 4K monitor long after the PC components have aged past usefulness.

The Zen AiO Pro Z240IE has a 23.8-inch display with 3840 x 2160 resolution and 10-finger touch. The IPS display offers nice wide viewing angles, so there's no problem with visibility when you have a group crowded around the all-in-one to watch a funny YouTube video. When I viewed the trailer for Wonder Woman, the blue of Diana's dress was vibrant and the sparks that flew when she deflected bullets were bright against the drab colors of the battleground. Details like individual hairs and tiny touches on costumes were all crystal-clear.

Display brightness was on the low side, averaging out to 247 nits on our light meter. That's nowhere near as bright as the 434 nits of the Apple iMac or the 354 nits of the Microsoft Surface Studio, but it is quite similar to the Lenovo IdeaCentre AIO 700's 230 nits.

The display reproduces 146 percent of the sRGB color gamut, which is quite good but doesn't quite match showings by top competitors; the Microsoft Surface Studio (181 percent) and the Dell XPS 27 (187 percent) both offer better.

Our review unit came with a wireless keyboard and mouse, which share a wireless USB dongle. The system has one USB 2.0 port just for this dongle, which is small enough to leave plugged in even when you want to move the all-in-one desktop to a different room or office.

The slim keyboard has the same sort of chiclet keys seen on Asus laptops, with a bare-metal finish that has the same icicle-gold color as the desktop. The full-size keyboard also boasts a full number pad and function keys, making it more versatile than the keyboard that comes standard with the Apple iMac. The included wireless mouse is simple but usable, with the standard right and left buttons and a rubbery scroll wheel.

Built into the Zen AiO Pro Z240IE are four Harman Kardon speakers and two internal woofers, all secreted away inside the all-in-one chassis. The volume gets loud, and the bass quality is quite good, but there was a distinct rattling buzz when I turned up the music or video I was listening to. This occurred only at higher volumes, but it was enough to put a damper on the otherwise-impressive sound.

The Asus Zen AiO Pro Z240IE is a capable performer in most respects, thanks to an Intel Core i7-7700T processor, 16GB of RAM and the combined storage of a 1TB hard drive and 128GB solid-state drive.

The combination of capacious hard drive storage and a speedy 128GB SSD served the Zen AiO Pro Z240IE well in our File Transfer test, in which it copied 4.97GB of mixed-media files from an external hard drive in just 50 seconds. That translates to 101.78 megabytes per second, which isn't a bad score, but it's not as impressive as the Lenovo IdeaCentre AIO 910's showing (169.7 MBps), and it's nowhere near scores by the Apple iMac (710 MBps) or the Microsoft Surface Studio (848 MBps).

With an Nvidia GeForce GTX 1050 graphics card and 4GB of dedicated video memory, the Asus Zen AiO Pro Z240IE is well-equipped for many graphics-heavy uses, but only light gaming.

Despite the discrete graphics card, this all-in-one isn't built as a gaming machine, and it struggled to produce playable frame rates in our gaming tests. In Grand Theft Auto V, it managed only 16.38 frames per second at 1080p, and had similarly low 18.18 fps in Rise of the Tomb Raider.

While these scores don't even approach the 30 fps needed for playability, we did see playable or nearly playable scores in Hitman (30.8 fps) and Metro: Last Light (24.33 fps at 1920 x 1080), suggesting that you can enjoy older games just fine, so long as you stick to full-HD resolution and dial back on the eye candy.

Asus outfits the Zen AiO Pro Z240IE with a 1-Megapixel camera and an optional infrared (IR) camera that works with Windows Hello for secure logins.

The image is pretty grainy, as I'd expect from a 1-Megapixel camera, but the color seems fairly accurate, capturing the red of my t-shirt and the bright green lining of my hoodie without skewing the colors too badly.

Asus ships the Zen AiO Pro with your choice of Windows 10 Home or Windows 10 Pro, which includes some bloatware, like Candy Crush Soda Saga, Minecraft, Netflix, Sling TV and a trial version of Microsoft Office. Asus also packs in a few proprietary apps, like ASUS WebStorage and ASUS ZenLink, for the company's cloud-storage offerings and smartphone-integration apps, respectively.

The Zen AiO Pro comes with a one-year warranty.

The Asus Zen AiO Pro Z240IE is an attractive all-in-one PC that boasts strong performance, a very good (if somewhat dim) display, and a healthy feature set with ample connectivity and even a bit of future proofing thanks to the included USB Type-C port.

Sure, it finds itself outpaced in some areas by one or two competitors. But when top-performing competitors sell for thousands more — like the Apple iMac ($2,899) and the Microsoft Surface Studio (starting at $2,999; $4,199 as tested) — then the $1,799.99 Asus Zen AiO Pro Z240IE looks extremely attractive, especially considering its solid performance and healthy feature set.

For a strong all-in-one desktop for the home, the Asus Zen AiO Pro Z240IE offers a pretty great blend of power, flexibility and affordability.