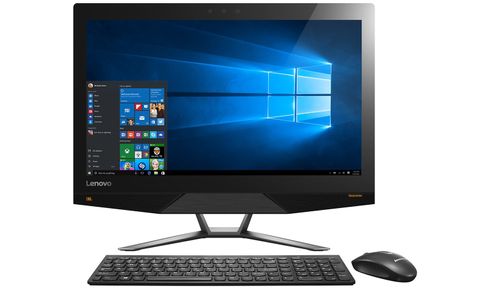 All-in-one PCs are better-known for being convenient rather than truly exciting, but that trend is starting to change. Just look at Lenovo's IdeaCentre AIO 700 ($799 starting, $1,099 as reviewed), which packs a rich 4K display and Intel's innovative RealSense camera into an upgradeable and fairly affordable package. Our configuration also includes a 6th-Generation Core i5 processor, 8GB of RAM and a 1TB hard drive, plus Nvidia GTX 950A graphics for playing games. Lenovo's home PC might not be the sexiest-looking all-in-one, but it hits a wonderful sweet spot, balancing price, performance and awesome features.

The all-black Lenovo IdeaCentre AIO 700 favors function over form, with a plain and fairly compact design that will sit unassumingly on your kitchen counter or work desk. The desktop's curved backside helps the fairly chunky PC look a bit sleeker, and there's a nice brushed-plastic plate below the display that's flanked by the machine's dual JBL speakers.

The AIO 700 offers plenty of ports for everyday computing, starting with two USB 3.0 ports (one with fast charging), an SD card slot and a headphone/mic jack in an easy-to-reach enclave on the left edge.

Just around the corner in the back, you'll find two USB 2.0 ports, a USB 3.0 input, an Ethernet jack, and both HDMI-in and HDMI-out connections. The inclusion of HDMI in is notable, as it allows the all-in-one to double as a monitor.

Unlike many all in ones, the AIO 700 can be popped open to swap in new parts. Once you screw off the PC's stand, you can slide off the back panel and quickly add more memory or storage.

The IdeaCentre packs Intel's 3D RealSense webcam, which allows for a host of fun motion-control and face-scanning applications.

Using the Personify video-calling app, I was able to make a recording of myself without picking up the background behind me — something that would typically require a green screen and fancy software to pull off. This allowed me to seamlessly superimpose myself on top of whatever was on my desktop at the time, which I could see being useful for showing off documents more clearly (or simply putting yourself in front of a cool background).

But the real fun began when I fired up the 3DMe app, which allows you to create a 3D scan of your face and plaster it on a variety of virtual figures, including characters from Star Trek, Ghostbusters and The Terminator. While seeing my face on Rick from The Walking Dead's body was undeniably creepy, it was very much my face, so kudos to the RealSense camera. If you're especially fond of any 3D figures you've created, you can order a 3D print of one for $70.

I experienced RealSense's gaming potential when playing Warrior Wave, a title that has you lead a series of tiny warriors to their goals by creating pathways with your hands. Playing Warrior Wave felt immediate and intuitive; I didn't even have to think twice before creating a bridge out of my hand or raising my arm to elevate my characters to the top.

The AIO 700's RealSense camera is also perfectly suitable for taking photos, capturing my maroon shirt and stubbly face with a reasonable amount of detail.

The IdeaCentre's 23.8-inch, 4K, touch display (3840 by 2160 pixels) is detailed enough for work, and vibrant enough for when you want to kick back and enjoy a movie. Colors popped off web pages, and text looked handwritten. I could spot every tiny detail in a 4K trailer for Elysium, from the stubble and sweat on Matt Damon's face to the myriad of lights and antennas on a space station.

I found the AIO's screen perfectly responsive to my touch, whether I was pinching to zoom into a web page or doodling in Paint with all 10 fingers at once.

I did find myself wishing the display were brighter, however, a concern that our lab tests backed up. The Lenovo AIO turned in a fairly low 230.6 nits of brightness on our light meter, which is dimmer than the Asus Zen AIO's 23.8-inch 4K display (255 nits) and the 21.5-inch iMac's 1080p screen (424 nits).

What the IdeaCentre lacks in brightness, it more than makes up for in color. The PC reproduced a rich 134.5 percent of the sRGB color gamut, with an impressive Delta E color accuracy of 0.39 (closer to 0 is better). The Asus Zen was just a bit more accurate (99 percent, 0.21), while the colorful iMac wasn't quite as spot-on (109 percent, 2.9).

The AIO 700's JBL speakers were more than loud enough to fill our 15-by-15-foot testing lab with music. I was impressed by the amount of bass I heard on Blink 182's "Bored to Death," though the song's guitars and vocals sounded a bit distorted at higher volumes. Kendrick Lamar's "King Kunta" told a similar story: The low end was delightful, but I wanted to hear the rapper's rapid-fire vocals more clearly.

Packing an Intel Core i5-6400 processor with 8GB of RAM, the AIO 700 has plenty of power to juggle your workload. The system never slowed down for me, even as I hopped among five separate Twitch streams, crunched away at a Google doc, downloaded a game from Steam and ran a full system scan all at once.

Lenovo's PC was equally apt at managing spreadsheets, matching 20,000 names to addresses in 3 minutes and 51 seconds on our OpenOffice test. That's just barely behind the Asus (3:43) and the iMac (3:49).

The IdeaCentre AIO 700 isn't just useful for touch-based or RealSense games; thanks to its Nvidia GTX 950A GPU, this PC can play a handful of mainstream PC titles at modest settings, too.

The AIO 700 had a harder time with the more demanding Metro: Last Light at 1080p, turning in low and high scores of 28 and 12 fps, respectively. By the time we cranked the game to 4K on high settings, we were left with a slide-show-like 3.7 fps.

Lenovo's desktop ships with a wireless keyboard and mouse combo, both of which are as plain as can be.

The keyboard is serviceable, but I found its 1.65mm keys too shallow for comfort. That didn't stop me from speeding through the Key Hero Typing Test at 91.2 words per minute with 98 percent accuracy, but it did make me wish I had a cozier keyboard.

Lenovo's wireless mouse is equally basic, but quite comfortable thanks to its curvy thumb rests. All that's there are two click buttons and a scroll wheel, which never gave me problems as I hopped among web pages and opened apps.

The IdeaCentre ships with a handful of first-party Lenovo apps, the most useful of which are Lenovo Companion and Lenovo Settings. The former lets you quickly check your PC's health, view your warranty status and download updates, while the latter lets you fine-tune the desktop's display, webcam, audio output and wireless settings.

Other free apps include PowerDVD for playing media, and Power2Go for burning CDs. There are also two included gesture-based games — Carrot Battle and Gesture Claw — both of which make use of the PC's RealSense camera.

I've always been impressed by Lenovo's all-in-ones, but the AIO 700 ($799 starting, $1,099 as reviewed) is the first one that truly wowed me. The PC's $1,099 price tag seems strikingly low for a desktop that offers both a 4K display and an Intel RealSense webcam, and its Core i5 processor is plenty powerful enough for getting through a day of work.

Asus' Zen AIO is a strong alternative, packing a USB Type-C port and more-powerful Nvidia GTX 960M graphics into an absolutely stunning silver (or gold) design. But you'll need to shell out around $1,499 for a RealSense-enabled 4K model, making the AIO 700 one of the most affordable ways to bring both a rich ultra-HD display and Intel's high-tech webcam into your home.