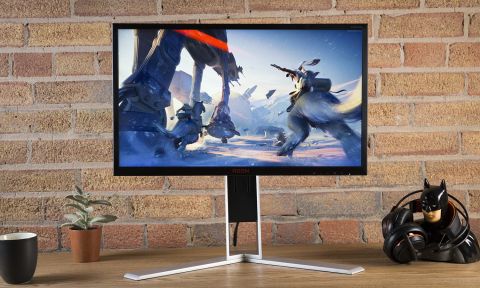 The AOC Agon AG241QG delivers a solid quad-HD display with Nvidia G-Sync for a decent price.

While AOC may be best known for making inexpensive monitors and a few TVs, the company is making a push toward serious gamers with its new Agon line. The 24-inch Agon AG241QG boasts 2560 x 1440 resolution, an impressive 165Hz refresh rate and Nvidia G-Sync technology. While this monitor's interface has some quirks, it's one of the best G-Sync monitors you can find for under $500.

The Agon line gets a bit more flash than you'll find in AOC's usual, drab designs, because this monitor is aimed at gamers. A slim but otherwise-basic bezel surrounds the panel itself, but on the back you'll see a bold, red chevron design, and the stand has an angular metal design that looks pretty nice. Attached with screws, the stand can be removed to accommodate a VESA mount, as well.

The stand offers several ergonomic adjustment options, letting you swivel horizontally 20 degrees in either direction, tilt between minus 5 and 23 degrees, and raise and lower the monitor between 16 and 21 inches in height.

Handy tick marks on the back hinge and height-adjustable stand tell you the specifics of your preferred setup. That way, you can easily set up your monitor just as you had it after packing it up to take to a LAN party or after someone repositions your display. The monitor also has 90-degree pivoting for those times when you want a vertical orientation.

The monitor has a few other niceties built in, like a handle that's integrated into the stand, making it easy to pick up and move the monitor. On the right-hand side of the chassis is a headphone hook, but when you don't need it, you can fold it neatly out of the way.

For video input, the AG241QG is outfitted with HDMI and DisplayPort connections, the latter of which lets you take advantage of the monitor's G-Sync capability. This monitor also has a good number of USB 3.0 ports, with two on the rear panel along with a USB 3.0 Type-B port.

Another two USB 3.0 ports are found on the right-hand side of the display chassis. One of the side-mounted ports also offers fast charging, making it convenient for powering up a phone or tablet while you enjoy a game or even while the monitor is powered down.

Additionally, the monitor has connections for headphones and headsets, but for audio through the monitor you'll need to connect over HDMI.

The AG241QG's settings menus are navigated using a cluster of buttons on the underside of the display chassis's right corner. The buttons are easy to find and offer decent tactile feedback, but the menus themselves are awkward to navigate and aren't particularly pretty.

The 24-inch panel on the AG241QG delivers 2560 x 1440 resolution and up to a 165Hz refresh rate, making this monitor an excellent choice for gaming. It also supports Nvidia G-Sync, so the monitor can match its refresh rate to the graphics card's actual frame output, completely eliminating screen tearing.

In the shadow-filled world of Batman: Arkham Knight, the AG241QG let me me see detail in dark environments, and the explosions and bright city lights looked good against a backdrop of a grimy city and cloudy night skies. The 1440p resolution made Gotham's exaggerated mix of gothic and art-deco architecture look fantastic.

At default brightness settings, the black levels were pretty good, but turning up the brightness gave darker tones a gray appearance. The panel supported up to 90 frames per second without a hitch, and fast-paced action looked smooth and fluid.

Grand Theft Auto V looked similarly impressive. The scenery of Los Santos was bright, with blue skies and a sprawling fictionalized Los Angeles. Nighttime car chases looked good, with glowing neon lights and sharp stars in the sky. Shoot-outs in daytime were quick moving, but without a hint of tearing, thanks to Nvidia's G-Sync technology.

The AG241QG's 1-millisecond lag time is also impressive, making it one of the most responsive monitors we've reviewed. Only the Dell XG2401 offers better, with a 0-ms time.

The one area where we really felt the monitor was lacking was in gaming presets. While many manufacturers will include presets for various game types, optimized for things like first-person shooters and racing games, the AG241QG has none. It lets you tweak several aspects of the picture, from contrast and brightness to game color and blue-light levels, but there are no presets to choose from.

That's not to say there are no gaming-oriented features. The monitor has an overclocking mode that you can toggle on and off to ramp up the refresh rate past the 144Hz normally offered over DisplayPort, and there's an optional timer that will remind you to take a break after long periods of use.

There's also a Shadow Control option, which is essentially a black stabilization solution that lets you lighten the darker portions of an image without washing out brighter areas. It's a handy option to have when playing games that might have heavy shadows obscuring details or enemies.

The one area where the Agon is lacking is in gaming presets.

The AG241QG also has a pair of 2-watt speakers built in, offering a fair amount of volume when you don't want to use a headset. Obviously, it can't offer the same sort of immersive sound that a good gaming headset will offer, but for basic stereo sound, it was pretty good.

The AOC Agon AG241QG has a lot going for it, from the quad-HD resolution to the inclusion of Nvidia G-Sync. The monitor has its failings, like a lack of specialized game presets and a clunky interface for settings. But on the whole, the combination of strong performance in games and excellent test results leave us more than willing to recommend the AOC Agon AG241QG. That it's slightly cheaper than our favorite 24-inch gaming monitor, the Dell 24 S2417DG, is just icing on the cake.