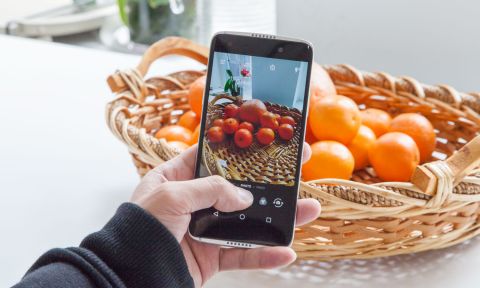 The Alcatel's Idol 5S style, bright display and sweet sound bring it so close to being a great value, but weak battery life holds it back.

The Alcatel Idol 5S is looking to carve out its own territory in a crowded field of value-priced phones. And there's plenty here to recommend, including an upscale design and a brilliant, 5.2-inch, full-HD screen. The Idol 5S even features dual front-facing speakers and a built-in fingerprint reader. If you're willing to put up with ads, you can get this phone for just $200 through Amazon Prime, or pay $280 without "special offers." Unfortunately, there's one thing about the Idol 5S that kind of spoils the party: subpar battery life.

On the inside, the Idol 5S is pretty similar to competing phones, but its exterior is what sets this device apart. It starts with a nearly perfectly symmetrical design, which sports the same-sized bezels on top and bottom and features a pair of front-facing stereo speakers built into the thin strip of aluminum that runs around the outside of the phone. Add in a complete lack of buttons on the device's face and the slick glass panels in front and back, and you get a phone that looks balanced and stately as it lords over its more humbly designed budget competitors.

Around back, the Idol 5S' 12-megapixel rear camera sits nearly flush against the rear of the phone, while a large fingerprint sensor rests within easy reach just above the Idol logo. On the bottom, Alcatel has smartly included both USB-C and a dedicated headset jack, so you won't have to worry about trying to charge your phone and use headphones at the same time. The only real drawback to the Idol 5S' design is its lack of water resistance.

Display: Stellar for the price

With solid brightness and a great color range (especially for an LCD display), the Idol 5S' 5.2-inch full-HD screen is pretty much as good as it gets in this price range. When I took a break from writing to watch the latest trailer for Blade Runner 2049, the Idol 5S did an admirable job re-creating all the heavy orange-, blue- and pink-tinted scenes, with colors that looked rich and just barely less saturated than they did on my professionally calibrated desktop monitor. The one quirk I noticed is that the Idol 5S' display runs a little cool, resulting in slightly more-pronounced blues and greens.

Featuring a peak brightness of 548 nits, the Idol 5S is way brighter than the 437-nit smartphone average and the ZenFone Zoom 3(421 nits). However, the Idol 5S is still slightly behind the Moto G5 Plus, which was even brighter, at 591 nits.

As for color, the Idol 5S covered 162 percent of the sRGB gamut, a score that's significantly better than the 106 percent and 112 percent we saw from the Moto G5 Plus and ZTE Blade V8 Pro, respectively. However, that number still falls short of the results from more-expensive phones that have AMOLED screens, such as the ZenFone Zoom 3, which covered an impressive 220 percent of the sRGB spectrum.

Performance: Fine, but nothing special

Shooting for a blend of speed and energy efficiency, Alcatel opted go with a Qualcomm Snapdragon 625 CPU on the Idol 5S, in addition to 3GB of RAM, 32GB of built-in storage and microSD expandability. Spec-wise, this puts the Idol 5S on the same playing field as the Asus ZenFone Zoom 3, ZTE Blade V8 Pro and Moto G5 Plus, though the latter two cost slightly less than the Idol 5S.

On 3DMark's Ice Storm Unlimited graphics test, the Idol 5S' score of 13,123 was within 6 percent of the results from competing phones.

We also measured browsing performance by running the JetStream 1.1 JavaScript test. The Idol 5S finished with a score of 25; that's lower than but not that far off from the scores of 29.75, 30.3 and 30.74 for the ZenFone Zoom 3, Moto G5 Plus and ZTE Blade V8 Pro.

With a 12-megapixel camera in back and a 5-MP selfie cam in front, the Idol 5S sports a pretty standard shooting setup. And wouldn't you know it, the Idol 5S shoots photos about as well as its competition, too.

At a nearby farmer's market, the Idol 5S captured an eye-catching array of reds when I shot a selection of cherries, making a similar shot from the Moto G5 Plus look dull by comparison. However, the neon tones on cherries in the center of the shot are a good example of when the Idol 5S pushes its reds a bit too far. Nevertheless, the 5S' shot still provided better white balance and details throughout than the G5 Plus did, which gives the Alcatel phone the win in this test.

When I shot a section of Union Square in New York, the Idol 5S delighted with vibrant greens and lots of details on both the statue in the center and the trees in back. And while the Idol's white balance is a bit too yellow, the colors are more accurate and more pleasing to look at that than the Moto G5 Plus overly blue color cast.

One thing I noticed is that the Idol 5S' auto HDR is somewhat timid, as it shot standard, non-HDR photos more frequently than the Moto G5 Plus, which is exactly what happened when I snapped a quick shot looking up Broadway toward Midtown Manhattan. The foreground and midground look dark in the Idol 5S' pic, while the Moto G5 Plus came away with something much brighter and more evenly exposed.

The Idol 5S' camera had a much more difficult time in low light, as tested in a darkened bar. The image looked dark, fuzzy and really lacking in sharpness. The Moto G5 Plus' shot was slightly brighter, but its overall photo quality wasn't actually that much better.

Finally, when I snapped a selfie, the Idol 5S' shot was a bit disappointing, as its pic looked hazy and flat compared to what I got from the Moto G5 Plus.

Software: Mostly up to date

The Idol 5s comes with pretty clean version of Android Nougat 7.1, which includes all of the latest software upgrades such as multiwindow mode, the Google Assistant and nifty little touches like the nighttime blue-light filter and the redesigned settings menu.

The one missing feature is Google's Pixel Launcher, which would replace the Idol 5S' standard app-drawer icon with sleeker swipe controls. But since there are a number of ways to customize your launcher on the Google Play store later on, this absence is not really a big deal.

Everything was going to so well for the Idol 5S, until we got around to testing battery life. The problem stems largely from the phone's 2,620-mAh battery, which is significantly smaller than those on other phones. On the Tom's Guide Battery Test (continuous web surfing over T-Mobile 4G LTE), the Idol 5S lasted just 7 hours and 39 minutes.

The standard retail price for the Idol 5S is $280. However, this phone is also part of Amazon's Prime Exclusive device portfolio, which knocks the price all the way down to $200 in exchange for putting ads and special offers on the phone's lock screen.

For those thinking about buying the phone outright and bringing it to their carrier, currently, the Idol 5S will work only on AT&T and T-Mobile. Alcatel says Sprint- and Verizon-compatible versions are on their way, but won't be available until later this summer.

At its standard retail price of $280, the Idol 5S seems a bit expensive. Staying in that general price range, you could spend a bit more and go with the $330 Asus ZenFone Zoom and get double the battery life, a vibrant AMOLED screen and way better cameras.

But when you look at the $200 Amazon Prime-exclusive model — which lops $80 off the price — things suddenly get a lot more interesting. Now, the Idol 5S costs just $15 more than the $185 Moto G5 Plus and offers a significantly more colorful screen, better speakers and a much more stylish design, while matching the G5 Plus' processing power and offering similar camera performance.

The one issue is the Idol 5S' decidedly worse battery life, which makes the ZTE Blade V8 Pro and Moto G5 Plus much better options for people who care about longevity. Unfortunately for the Idol, that's pretty much everyone. It's a real shame, because otherwise, the Idol 5S could have carved out a sweet niche between competing budget and midrange phones.