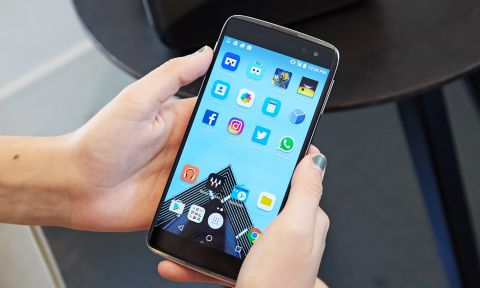 The Alcatel Idol 4S combines good looks, booming sound and a gorgeous display into a sub-$400 smartphone, and throws in a virtual-reality headset to boot.

Although the amount of virtual-reality content — from games to videos and more — is growing rapidly, a lot of it has been for smartphones. But when it comes to content for VR headsets, you're still pretty limited. Alcatel is looking to lure early adopters with its new flagship smartphone, the Idol 4S, which comes bundled with its very own VR headset. Also included in the $399 bundle (or $349 if you order before Aug. 3) is an Incipio case for your phone, a screen protector and a pair of JBL headphones. This is a bundle worth more than the sum of its parts.

Lovely looks and a helpful button

The Idol 4S is the more premium of the two phones Alcatel will release this year, and it feels that way: It's covered in glass on both sides, and feels slick when you pick it up. Its rounded glass edges make the Idol 4S aesthetically akin to the Samsung Galaxy S7.

As with Samsung's phone, the rear 16-megapixel camera protrudes out the back, right above a small fingerprint reader that proved to be very responsive, unlocking the phone in about a second. Although I've grown accustomed to the front-facing fingerprint reader on my iPhone 6s, I found the rear placement on the Idol 4S to be just as convenient.

A side-mounted "Boom Key," which looks like it was aped from Sony's Xperia phones, acts as a programmable button, and lets you perform a number of functions, such as launching the camera, taking a photo or triggering another application. I set it up to act as a shutter button for the camera and found it to be pretty quick; the camera app opened in about a second.

MORE: The 10 Best Smartphones You Can Buy Right Now

The 5.5-inch 2560 x 1440 AMOLED screen on the Idol 4S was impressive for a midrange phone. When I watched the latest trailer for Star Trek Beyond, the colors of the Starfleet uniforms really popped, especially the gold command tunics.

Not surprisingly, the Idol 4S was able to display 185.6 percent of the sRGB color gamut, making this one very colorful screen. That score is much higher than the average for smartphones (137) and in the same ballpark as the S7 Edge (189) and the OnePlus 3 (192).

Its color accuracy (Delta-E) score of 2.7 was a touch better than the 2.9 scored by the S7 Edge and the OnePlus 3, not to mention the 4.4 smartphone average. (Numbers closer to 0 are better.)

Dual front-facing JBL speakers on the Idol 4S really brought the boom in our tests. I was impressed with the depth of the bass when listening to Rihanna's "Sledgehammer" in the aforementioned Star Trek trailer. Although higher tones became a bit harsh at higher volumes, overall, we heard a lot more complexity from the music played on the Idol 4S than we did on most other smartphones.

A Waves MaxxAudio app lets you further tweak audio output. By default, the utility automatically switches among three profiles (Music, Movie, and General) depending on what you're doing, but you can manually adjust equalizer presets, too.

VR headset: A nice bonus, with some flaws

The VR headset bundled with the Idol 4S lies somewhere between Google Cardboard and the Samsung Gear VR in terms of looks and functionality.

Like Samsung's headset, Alcatel's is made of a clean white plastic with a translucent black front, and a comfortable foam-lined headband that you can adjust. There are also two buttons on the headset's bottom edge that let you navigate Alcatel's VR app. However, Alcatel's VR headset lacks the focus wheel and touch panel found on the Gear VR, so if your eyes have trouble focusing using Alcatel's device, you're out of luck. Also, the Idol 4S does not meet the requirements for Google Daydream (Google's VR platform), according to company representatives.

Alcatel preloads three VR apps onto the Idol 4S: VR Launcher, VR Store and Littlstar. VR Store is essentially another way into Google Play, but it takes you directly to VR-related media and games. VR Launcher lets you access all of your VR-related content in an easily navigable interface. Menu options include Games, Video, Photo, 360 Video, 360 Photo, and Littlstar. What's Littlstar? It's another app that curates and aggregates 360-degree videos.

As you download new VR games and content, they're automatically populated in the VR Launcher app, which I found handy — no need to go digging around the phone.

I downloaded a 360-degree video of some people flying down a mountainside in wingsuits, as well as a Formula 1 car zipping along a track. I couldn't watch the wingsuit gliders for more than a minute or so for fear of getting dizzy, but the race-car video was great. Annoyingly, there's no way to reorient the video in the goggles, so I had to look down and to my left to see the front of the car.

I also downloaded a Star Wars game from the VR Store, but the game started in non-VR mode, requiring me to remove the Idol 4S from the headset. The game's VR content wasn't very compelling — just a few short videos. The Insurgent VR "game" wasn't any more engaging; it consisted of just a clip from the movie, presented as if I were watching it in a theater. The Deep Space VR game was a bit more compelling, as I blasted away, attacking spacecraft by swiveling my head around.

Unlike the HTC Vive headset, which I could use comfortably for a long time without becoming slightly dizzy, I found I could use Alcatel's headset for only a few minutes before needing to remove it.

CPU gets the job done

The Idol 4S' Snapdragon 652 processor isn't the speediest CPU that Qualcomm makes, but when paired with 3GB of RAM, it was plenty fast for most activities on the phone. I blasted my way through scores of zombies in Unkilled, and never experienced a hiccup. The Idol 4S was pretty quick to switch from the home screen to the camera and back again; each transition took about a second.

The difference in processing power was most keenly felt in our synthetic graphics tests; the Idol 4S' score of 17,985 on 3DMark Ice Storm Unlimited was a little better than half that of the OnePlus 3 (30,491) and the S7 Edge (29,851). Still, I had no trouble bustin' ghosts in the Ghostbusters: Slime City game.

One of the few tweaks that Alcatel made to the Android 6.0 Marshmallow interface is one I wish it hadn't: When you hover your hand or finger over the Idol 4S' display, the background wallpaper blurs out — a feature aimed at making the app icons more prominent. I found this to be more distracting than anything. Fortunately, you can turn this off under Settings > Gestures > Touchless UI.

Camera stumbles in the dark

In good lighting, the Idol 4S' 16-megapixel camera takes some pretty good photos. Using the camera's HDR mode, it accurately picked up the details — and properly illuminated the shaded side — of the Flatiron Building.

In photos taken at a restaurant, you can see the beads of olive oil glistening among the diced tomatoes, and a shot of seared salmon over a bed of greens still makes my stomach rumble.

I was less impressed with the camera in photos taken in darker conditions.

In a somewhat dim room, the Idol 4S' camera wasn't fast enough to keep up with two cats walking around. Many of the shots I took turned out blurry, even though the cats weren't moving all that fast. I switched from Auto mode to Manual, and boosted the ISO to 800, to no avail.

In Manual mode, you can control the ISO (up to 1600), shutter speed (half-second to 1/8000 sec), white balance, and focus depth. Unfortunately, you don't get a live preview of the changes.

Other camera features include Panorama, Slo-Mo video and Micro-video (which lets you capture videos up to 14 seconds in length).

The front 8-MP camera on the Idol 4S took decent selfies; my skin tones were accurate, but the overall image was a bit splotchy, and not well defined.

The Fyuse app, which is built into the camera but is also a stand-alone app, lets you create your own VR content. Press and hold the shutter button, and you can take a 360-degree panorama by rotating the camera around. (You can also walk in a circle around an object, too.) Fyuse then stitches it all together by identifying discrete points in each frame; it's fun to watch it work.

After the image is stitched, you can swivel your phone to view the image from all sides. The app was easy to use, but there are a few limitations. For one, you can only capture a narrow swath vertically, so your experience won't be as immersive as it would be if you were using a true 360-degree camera. Also, you can't rotate around indefinitely; the app doesn't stitch the start and stop points into a seamless image. That's also a big bummer for VR.

Battery gets you through the day

On AT&T's network, the 3,000-mAh battery in the Idol 4S lasted 9 hours and 9 minutes on our battery test (web surfing via LTE, with the display set to 36 percent brightness).

Good battery life, booming speakers and a lush screen — all in an attractive design — alone would make the $399 Alcatel Idol 4S a strong unlocked phone deal. But on top of that, you get a VR headset bundled with the phone. Although Alcatel's included VR headset isn't as good as the Samsung Gear VR, it's still a nice add-on that makes this phone an even better value. Plus, it comes with a phone case and a screen protector. The OnePlus 3, also $399, offers better performance, but it has a lower-resolution display and doesn't last as long on a charge. When you put it all together, Alcatel's Idol 4S is a worthy option and one of the best unlocked phones on the market.