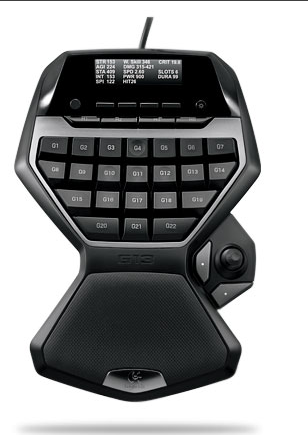 According to BusinessWire, Logitech is set to release its G13 Gameboard. This gamer-oriented mini keyboard is expected to ship before the holidays, and will sell for an MSRP of $79.99. What should you expect?

All the same accouterments found on the full-size G keyboards. While offering a very compact design, the G13 gives users 25 programmable keys along with a programmable analog stick. With preset keys, Logitech claims the G13 offers gamers "up to 87 ways for you to control your game", with the installed software, of course.

Along with the same level of key and macro customization found on the full-size G boards, the G13 also offers backlit keys and a "GamePanel" LCD that sports a sharp 160x43 resolution. This combined with the Logitech public SDK means an endless number of game and application-related programs can be written for the G13, which likely includes display modes for system resources, date/time, Ventrilo, certain games, and messenger clients like Xfire.

“If you’re into serious gaming, there’s no better feeling than playing with the G13 gameboard by your side,” said Ruben Mookerjee, Logitech’s director of product marketing for gaming. “Unlike other gameboards that focus only on programmability, the G13 advanced gameboard incorporates the principles of our award-winning Comfort Wave design. So whether you’re getting into World of Warcraft® or walking into your next LAN party, the G13 gameboard gives you a powerful advantage over those forced to work with less.”

While the G13 is already on the Logitech website, and guaranteed to ship for the holidays if you order within the next five days, another G-series board has emerged though Engadget China.

The G18 is supposedly the newest full-size G-series keyboard, slated to replace the G15 Gen 2 as the third iteration of the product. From the looks of it, the G18 aims to please, offering many of the same features of the G15 with enough updates and tweaks to make gamers everywhere salivate.

While it maintains the orange light scheme, the LCD looks to have been redesigned and re-imagined in full color, and Logitech also added a second row of macro keys to the left-hand side of the board. There also appears to be a beefier built-in wrist rest and several new buttons at the center-top of the board. If the current G15 is any indicator, Logitech has a sure winner on their hands. If the G18 is real, expect it in 2009 with an MSRP in the range of $100-$120.