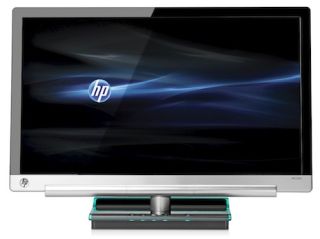 According to ZDNet, the HP x2301 will sport a brushed-aluminum bezel and a translucent aquamarine base that will play host to all the necessary connectors including HDMI, VGA and DVI-D, the adjustment buttons and the power. It will also be plug-and-play, requiring absolutely no need for manual installation.

On the specs side, the display will feature full HD (1920 x 1080), 72-percent of the color gamut, a 8,000,000:1 dynamic contrast ratio, a 3-ms GtG response time, and glare-reducing BrightView technology. For those concerned about burning up the earth before its expected expiration date, the x2301 will also be mercury- and arsenic-free with Energy Star 5.0 and EPEAT Silver certifications.

The HP x2301 will reportedly be a limited edition panel, but there's no indication of how long the device will remain in production. Expect to see the HP x2301 panel to go on sale June 10 with a starting price of $279.99. We're betting we'll see this monitor make an appearance by the end of the month at Computex 2011.