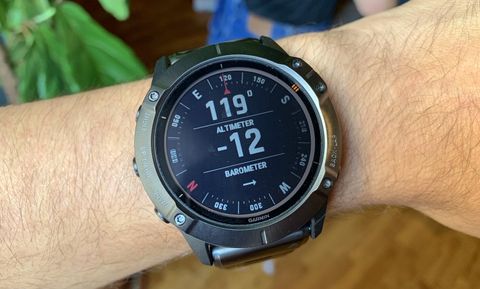 With the longest battery life, largest displays, and highest price tags, Garmin’s Fenix series have never been known for their subtlety. None of that has changed with the newest in the lineup, the Fenix 6. Starting at $599—but going up all the way to $1,149—the Fenix 6 will most likely be the GPS watch for outdoor adventurers, or those who wish they were.

We had a chance to try on Garmin’s latest high-end GPS watch; here’s our initial impressions.

Maybe it was because of its gravitational pull, but I was drawn to the massiveness of the Fenix 6X Pro Solar. With a case size of 51mm, it is a serious piece of jewelry, and will make most wrists look like matchsticks.

The underside of the Fenix 6 Series has an optical heart rate sensor as well as a charging port, the latter of which appears to be the same as on other recent Garmin GPS watches, such as the Forerunner 245. While it’s not often that you’ll switch between different watches, I’m glad to see the company standardizing on this.

The 6X Pro Solar’s case is made of titanium, which still weighs a hefty 54 grams (1.9 ounces). For those with daintier features, the Fenix 6S has a 42mm case, and weighs a lighter 1.5 ounces.

At 1.4 inches across, the Fenix 6X has a lot of real estate to cover. As with its other running watches, the Fenix uses a transflective display, which uses sunlight to make things easier to read. It’s a lot more effective than LCD displays outdoors, and saves you from having to crank up the brightness of a screen all the way, which has a detrimental effect on battery life.

The one downside to the Fenix’ display is that it looks a bit more pixelated than LCD and AMOLED screens. The Fenix 6X has a resolution of 280 x 280 pixels, which is lower than that of the Apple Watch Series 4 (368 x 448 OLED).

In addition, each watch is available in a variety of case and band colors; bands can now be swapped out more easily, via a quick-release mechanism.

The Fenix 6X Pro Solar’s key attribute is the solar panel built into the display. With it, Garmin estimates that you’ll be able to get an extra 28 hours of juice—on top of the battery’s 120 hours—when in normal GPS mode. If you’re using GPS in expedition mode (where it pings satellites less frequently), the 6X Pro Solar should last up to 46 days, with 10 days on top of that with the solar charger.

The only drawback to the Solar edition is that you can’t get it with a sapphire case (it has Gorilla Glass instead), which makes it slightly less scratch-resistant.

Runners who want to ensure that they’re pacing themselves properly during a race can use the new PacePro feature in the Fenix 6 series. After creating a plan (either on the watch or in the Garmin app), they’ll be able to keep tabs on their target split pace, and if they’re ahead or behind on the pace they’ve set.

The Pro and Sapphire versions of each Fenix watch also have up 32GB of storage, and come preloaded with more than 41,000 golf courses as well as more than 2,000 ski resorts. The on-board storage can be used to download songs to the watch itself, and can be synced with Spotify and Amazon Music.

While the battery life on the new Fenix 6 watches seems pretty epic, a new power manager can be customized to a wearer’s needs, and lets them see how each of the watch’s sensors and features affect battery life. Plus, power saving modes can be adjusted on the fly.

Battery life has always been an issue for smartwatches, and though Garmin’s previous Fenix devices have been known for their endurance, the addition of solar power to the Fenix 6X could result in a watch that almost never needs to be recharged. For those out on epic adventures far from any outlet, this feature alone could make the Fenix 6X Solar’s equally epic price worth it. But we’re also interested to try out all of the Fenix’s other features; what good is a watch with great battery life if you can’t do anything with it?