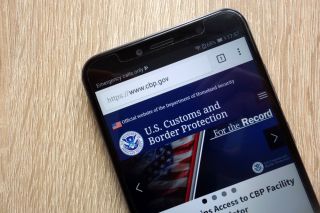 Border guards at U.S. airports and other ports of entry can no longer indiscrimately search or seize travelers' laptops or other electronic devices, a federal court in Boston ruled today (Nov. 12).

U.S. District Court Judge Denise J. Casper, who wrote the ruling, said that from now on, federal agents at border crossings, which include personnel from Customs and Border Protection (CBP) and Immigration and Customs Enforcement (ICE), must have "reasonable suspicion that the devices contain contraband" to conduct a search.

Until now, border agents could demand a search of any laptop, smartphone, tablet or other electronic device, regardless of the bearer's citizenship. Refusal to unlock a device or provide the device password could result in indefinite seizure of the device. The policy could best be summed up as "You have no rights at the border."

Now you do. The federal court in Boston ruled that the existing policy, which is based on a 1977 Supreme Court ruling, violates the Fourth Amendment of the U.S. Constitution forbidding unreasonable search and seizure.

The ruling is the result of a lawsuit brought by the American Civil Liberties Union and the Electronic Frontier Foundation on behalf of 10 U.S. citizens and one U.S. permanent resident who had their devices searched and/or seized at ports of entry.

Of course, border agents can simply state that such a suspicion exists in order to search the device. The court ruled that they do not need a warrant. But, like a police officer who asks to search your car's trunk when you're pulled over, the border agent must explain the search decision when asked.

It's likely that this ruling will be appealed by the Department of Homeland Security, and we are not of sufficient legal knowledge to be able to tell from the rather complicated text of the ruling whether the ruling will apply immediately or nationwide.

But we hope that next time a border agent asks you to open up your laptop and type in the password, you can at least be given a good explanation why.