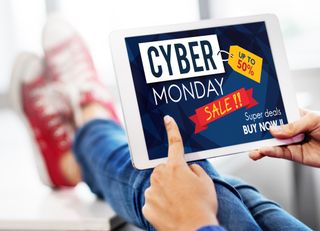 Deloitte's annual Holiday Survey of Consumers also found that shoppers will spend $1,496 per household this year. While that's slightly down from last year's $1,536 average, it indicates that consumers will be relying on deals more so than ever in an effort to stretch their holiday budget.

So we're giving you our top Cyber Monday predictions on the most popular gadgets of 2019. From the new Nintendo Switch Lite to the best laptops of 2019 — here are the sale prices to look for in order to ensure you're getting the best tech deals this holiday season.

Our Prediction: $149 ($50 off)
The Nintendo Switch Lite is the perfect on-the-go console. Priced at $199, it's $100 cheaper than the regular Nintendo Switch console. Released in September, the new handheld has already dropped to an all-time price low of $169.99 twice this year. Both deals came from retailer Rakuten and lasted just 24 hours. We predict Nintendo's new console will drop to $149 this Cyber Monday. Look for deals from Rakuten, Walmart, and Amazon. Alternatively, if you prefer the full console — the new Nintendo Switch hit $274 via Amazon a few weeks ago and dropped to an all-time low of $262 via Rakuten earlier this week. (You can currently get it for $329 with a free game and accessory during Walmart's Early Deals Drop sale). A $249 Nintendo Switch is looking like a high probability on Cyber Monday.

Our Prediction: $299 ($200 off)
The PS4 Pro was once immune to Cyber Monday price cuts. However, Sony’s aging console will soon be replaced by the now-confirmed PS5. As a result, this will likely be the last Cyber Monday where the PS4 Pro is Sony's flagship console. That means retailers are not going to hold back this holiday season and the PS4 Pro will hit prices we've never seen before. The PS4 Pro dropped to $310 in September and then fell to an all-time low of $305 in October. We think it'll hit $299 or even $289 this Cyber Monday. Look for deals from Walmart (which had the best PS4 Black Friday deals last year) and Rakuten. Also, remember that another round of Trump's tariffs will go into effect on December 15. It will add a 15% tax on consoles, which could increase prices.

Our Prediction: $799 ($300 off)
With the 12-inch MacBook gone, the MacBook Air is once again Apple's entry level Mac laptop. Currently, there are two MacBook Air laptops out in the wild — the 2018 model and the 2019 refresh. The only difference between the two models is that the 2019 model sports a TrueTone display. This technology adjusts the screen’s brightness based on the ambient lighting in your room. (It's the same technology found on the iPhone). The 2018 MacBook Air has dropped as low as $849 this year, whereas the TrueTone model hit $899 earlier this fall. We predict both will drop an extra $50 on Cyber Monday via Amazon and/or Best Buy.

Our Prediction: $99 ($29 off)
The new Echo Buds are Amazon's answer to the AirPods 2. And in many ways, they're better. They have Alexa built in, they're IPX4 sweat/water resistant, and they feature Bose noise reduction. They'll ship on October 30 for $129.99. However, we predict they'll drop to at least $99.99 by Cyber Monday. They'll likely follow the same deal trajectory as the Echo Spot, which dropped from $129.99 to $99 last holiday season. And with Apple's new AirPods Pro priced at $249, Amazon has even more incentive to undercut shoppers looking for cheap AirPods Black Friday deals.