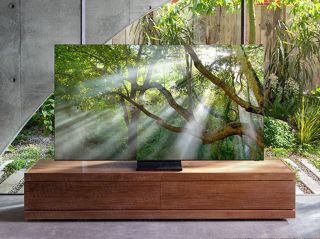 Samsung might be known for The Frame TV, which hangs on the wall like art and sports a decorative frame around the screen, but the rest of Samsung's premium TV lineup might be losing the bezels entirely for 2020.

Just days ahead of CES, a leaked image of Samsung's new 8K QLED TVs was spotted by German tech site 4Kfilme. The images show a Samsung TV, complete with the L-shaped pedestal base used on previous QLED models, but the lack of black bars around the display gives the TV a pronounced new look.

The lack of bezel would be a stark change from past models and other LCD TVs, replicating a trick previously offered on Samsung's Galaxy phones and a handful of LG OLED TVs. But it would be a major improvement for LCD TVs, and mark a new level of refinement for the technology, alongside Samsung's quantum dot enhancement and local dimming, two innovations that have drastically improved the quality of most TVs on the market.

While not truly bezel-less – the picture clearly shows a bottom bezel, and likely has slim borders around the top and sides of the screen – the proportions are such that at a comfortable viewing distance the bezel should be difficult to even notice. The result should be something akin to the platonic ideal of TV design: When viewing the TV, only the display panel can be seen.

Additional reporting by 4Kfilme and Samsung-focused news site Sammobile suggests that this new feature may be called "Zero Bezel" or "Infinity Screen" based on trademark filings from the company in early 2019. Reports from South Korea also suggest that manufacturing for the new premium design is set to begin early this year, starting in February in advance of a March product launch.

While this is all unconfirmed at this point, the basis for these reports looks pretty solid. With CES literally days away, we can expect a number of major TV announcements in the coming week, and we're sure Samsung has more than one trick up its sleeve, with a full slate of TVs for the new year. There will be plenty of news from every major TV manufacturer, so keep an eye on our CES 2020 coverage for all the latest news.