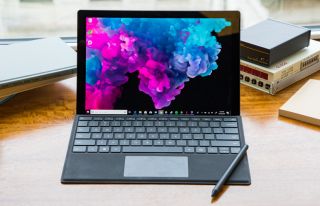 Microsoft's Oct. 2 event is almost here and that means we're just a few hours away from seeing a new Surface Pro 7 and Surface Laptop 3. That's good news for Surface fans because that means now's your chance to score the Surface Pro 6 at a stellar price.

Currently, Amazon has the Microsoft Surface Pro 6 with Type Cover on sale for $899.99. Traditionally priced at $1,329, that's $429 off and the lowest price we've ever seen for this Surface Pro 6 bundle. It's also $100 cheaper than Microsoft's direct $999 sale price for the same bundle.

The configuration on sale sports a Core i5 CPU, 8GB of RAM, and a 256GB SSD. Sister site Laptop Mag reviewed the Surface Pro 6 and loved its fast performance, excellent battery life, and bright, colorful display. Though it lacks USB-C and Thunderbolt ports, they gave it a 4.5 out of 5 star rating for its speedy quad-core performance. It's one of the best 2-in-1 laptops of 2019.

The Surface Pro 6 supports three modes: studio, tablet, and laptop. At 0.33-inch thin and 1.7 pounds (2.4 pounds with the keyboard), the Surface Pro is slender, yet sturdy and stable.

In our tests, the trailer for Aquaman on its 12.3-inch PixelSense (2736 x 1824) display was astonishingly bright and color-rich. In terms of ports, the Surface Pro 6 is equipped with a Surface Connect port, a USB 3.0 port, a mini DisplayPort, a headphone jack, and microSD slot.

Performance-wise, the Surface Pro 6 is a big step up from the previous Surface Pro machines. Our machine ran silky smooth even with 28 Chrome tabs open and Spotify and Netflix streams.

However, the best thing about the Surface Pro 6 is its improved endurance. In Laptop Mag's battery test, the Surface Pro went the distance at 9 hours and 20 minutes. Compared to the 2017 Surface Pro, that's 2 hours longer.

Amazon doesn't mention an expiration date for this bundle deal, so we recommend that you grab it while you still can.