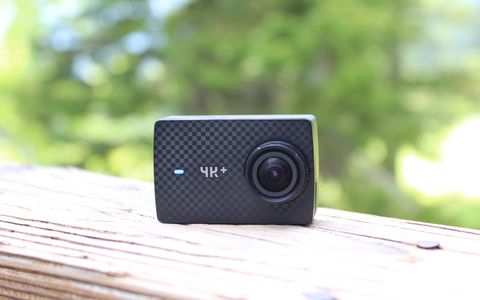 Although GoPro is the best-known company for action cams, the Yi 4K+ makes a serious bid for the GoPro's throne. Not only does the Yi camera have many of the GoPro Hero 6's best features (4K at 60 fps, voice control and image stabilization), but it also costs $100 less. However, you have to make a few compromises for the lower price. For all of our top picks, be sure to check out our best action cameras page.

The Yi 4K+ is a refined and elegantly designed product. The first thing I noticed when taking it out of its package was the carbon-fiber-like weave pattern on the body, with a single horizontal LED light on the front of the camera. Compared to the industry-leading (and our Editor's Choice) GoPro Hero6 Black, the Yi is the sexier of the two.

The Yi's design is quite minimal, with only a single multifunction button on the top and a beautiful high-resolution touch screen. Similar to what the current generation of GoPro models provide, the touch screen allows you to easily change such settings as camera resolutions, frame rates and modes, field of view, white balance, and focusing point. The camera is smart in that it lets you choose only those settings that are appropriate for that mode or corresponding settings.

Compared to the industry-leading (and our Editor's Choice) GoPro Hero6 Black, the Yi is the sexier camera.

A door on the camera's bottom opens to reveal both the battery and a microSD card slot; a door on the side contains a USB Type-C port that can be used for charging, file transfer and even connecting an external microphone.

The Yi 4K+ has a tripod-mount screw on the bottom, so mounting the camera without a housing is easy. However, unlike the GoPro Hero6, the Yi is not waterproof, and the plastic housing to make it so is sold separately for $40.

The Yi 4K+'s menu items are intuitively laid out, and the interface uses small, right-pointing arrow to indicate when multiple options are available. For instance, 4K resolution offers either 30 fps or 60 fps, and 1080p offers 30/60/90 fps.

However, you can't use the touch screen when the camera is in its waterproof housing. While you can still use the multifunction button to change shooting modes, you can't adjust any other settings. The single multifunction button on the top of the camera was quite responsive to commands for both starting and stopping video and taking still pictures.

Like many others, this camera has Wi-Fi, and you can connect to it through an app on either an iOS or Android device. While I was able to connect to the Wi-Fi from the camera with my Google Pixel 2 and an older Samsung Galaxy S7, the connection between the app and the camera would fail every time.

However, the connection worked immediately when I tried it with an iPhone 6S+. When I reached out to Yi's customer service, they suggested putting the phone into airplane mode before connecting; this worked, though it's an inconvenient fix. The app offers access to the camera, including shutter and recording control, live view, and access to individual settings.

After updating the Yi's firmware, I was able to use the camera's voice-control feature to record video, as well as take single photos and capture slow-motion video and time-lapse photos. When in a quiet environment, voice control worked about 90 percent of the time. In a louder environment or when I was more than 10 feet from the camera, the accuracy went down to roughly 75 percent.

The Yi 4k+ produced similar results as the GoPro Hero6 and even Hero5. Colors were a little flat in some cases but still popped while filming on the dock at sunrise, as seen in the video clip below. Compared to the GoPro Hero5, however, colors weren't as vibrant.

This camera includes a powerful quad-core ARM processor, allowing it to offer 4K resolution at 60 fps, matching the level offered in the industry-leading GoPro Hero6 Black.

However, getting good video also depends on your mounting platform. When I used a lower-quality third-party bicycle bracket, the majority of the video was almost unwatchable. Once I put the camera on a slightly more stable platform, the video quality improved greatly.

It will also depend on what activity you are doing, as those actions with fewer hard bumps, like surfing versus biking down a bumpy street, will make for better video quality. Yi offers an optional gimbal ($199.99) and provides info about it in the companion app.

One thing to note about this camera is that when Electronic Image Stabilization (EIS) is turned on, the max resolution is 4K/30 fps. When shooting Slow-Mo at 720p, you can film at up to 240 fps.

Photos at sunrise overlooking the river came out beautifully, with shadows showing appropriate black levels and the sun correctly exposed in the center of the frame. Colors seemed to pop, with golds, reds, oranges and pinks easily distinguishable against a properly saturated blue sky.

When you're shooting without the camera's waterproof case, the Yi 4K+'s microphone is unimpeded, producing audio quality that's good, though not award-winning.

Unfortunately, pretty much no manufacturer has figured out how to make footage sound good once a camera is locked in a plastic housing. With the case on the camera, audio sounds a bit muffled; you can't distinguish the sound of cars passing by.

MORE: Which GoPro Is Right For You?

A third option is to use an external microphone, which will certainly produce the best quality. It requires a USB-C-to-3.5mm accessory that is not included, nor offered by the company. Luckily, GoPro and other companies offer a compatible unit that will allow you to use a Rode, Audio-Technica or other similar microphone.

The Yi 4K+ is a solid alternative to the GoPro line, offering a similar feature set, including a great touch screen, 4K resolution at 60 fps, electronic image stabilization and voice control. However, this camera doesn't quite rise to the level of the GoPro Hero6; while video from the Yi's camera is quite good, it's not as vibrant compared to footage from the leading GoPro.

Moreover, the Yi 4K+ isn't waterproof without the optional $40 housing. More importantly, the app works with Android devices only when connecting while in airplane mode. Still, the Yi 4K+ is a good alternative to the Hero6 Black GoPro, and it costs $50 less.