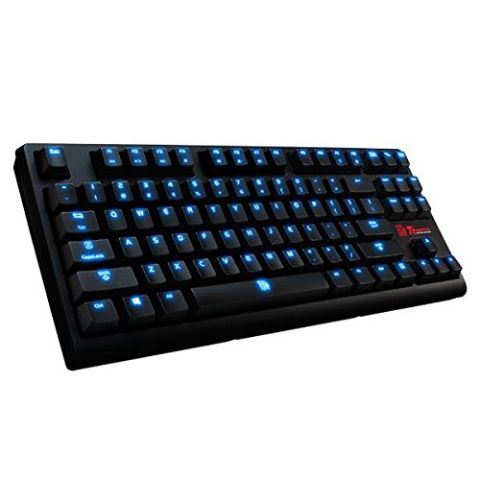 If you can do without bells and whistles, the Poseidon ZX is a quality keyboard at a much lower price than some of its nearest competitors.

Gamers who find macros tiresome and a keyboard's rightmost numerical pad distracting are usually best-served by compact tenkeyless keyboards. For these players, the Poseidon ZX from Tt eSports ($80) is a solid choice, as it delivers comfortable keystrokes without any frills. If you want as little as possible between you and your game, the Poseidon ZX is well worth a look.

The Poseidon ZX is one of the smaller keyboards I've reviewed, measuring in at 14.3 x 5.6 inches. That's comparable to the QuickFire Rapid Tenkeyless, which is 14.1 x 5.4 inches, and much smaller than the full-size Logitech G710+, which measures 20.0 x 8.7 inches. If desk space is at a premium in your domicile, the Poseidon ZX won't intrude much. At 2.14 pounds, the device is light enough to transport, but still probably not the most convenient peripheral to stash in luggage.

The Poseidon ZX also sports a snazzy blue backlight with four different levels of illumination. Although you won't be able to light up on a key-by-key basis (such as by illuminating only the WASD keys), Tt eSports does offer some consolation: The device comes with a collection of red keys to replace the default W, A, S, D, Esc and arrow keys. Having those often-used keys in a striking red rather than the default black helps differentiate them at least as well as individually lit keys would.

The first thing I noticed about the Poseidon ZX is that the keys feel very close together, even when compared with other tenkeyless keyboards. This helps keep the design of the peripheral compact and streamlined, but it also means that I hit keys by mistake fairly regularly while learning how to use it.

One thing to note is that the Poseidon ZX is only available with Tt Certified Mechanical Blue switches, similar in feel to the ubiquitous Cherry MX Blues. These loud, resistant keys are my favorite when it comes to typing up articles or jumping around like a madman in Titanfall, but users who need the relative peace and quiet of Red or Brown switches will be out of luck and should probably look elsewhere.

There's nothing remarkable about the size, shape or texture of the keys, all of which are slightly angled and indented. They're better than the keys on a standard membrane keyboard, but not as pleasant as, for example, Logitech's textured keys on the G710+. The key actuation measured a pleasant 55 g, but the key travel was a surprisingly large 4.5 mm. In light of the key travel distance, we are not sure why our error rate was higher with the Poseidon ZX than with the office keyboard.

The Poseidon ZX has few features to speak of beyond what you see at first glance. It eschews both macros and dedicated software. I've found that this tends to be the smartest route for tenkeyless keyboards, which, by definition, are meant to be as simple as possible.

The only "feature" the Poseidon ZX boasts is the ability to disable the Windows key during gaming sessions in order to prevent users from accidentally hitting it in the middle of a pitched battle. This is a pretty common feature among gaming keyboards, so it's not likely to make anyone's jaw drop.

Beyond that, the F1-F7 keys double as media controllers. Gamers looking for deep customization options won't find much in the Poseidon ZX, but the keyboard's target audience probably wasn't looking for them anyway.

In the case of the Poseidon ZX, streamlined design translates to excellent performance. I tested it with our standard battery of games: Titanfall; StarCraft II: Heart of the Swarm; Watch Dogs; and Star Wars: The Old Republic. The keyboard performed very well for each game, although the lack of a number pad and macros was more noticeable in some games than in others.

Titanfall definitely provided the best experience out of the four games. Since macros and numpads aren't terribly useful for Titanfall, I had no trouble leaping around the map, shooting foes (or, more often, getting shot by them) and stomping pilots with giant robots.

The other three games worked fine as well, but a numpad would have been extremely useful in Watch Dogs, where number keys correspond to weapons, or Heart of the Swarm, where numbers correspond to various control groups within your army. Macros would have helped during high-level play for The Old Republic, although as a fairly casual user, I didn't mind mashing the skill buttons instead.

The Poseidon ZX supports a rollover of more than 10 keys, meaning that you can hit keys with all of your fingers simultaneously and never miss a command.

Provided that Blues are your switches of choice and you never needed that noisome numpad anyway, the Poseidon ZX is a quality keyboard at a much lower price than some of its nearest competitors.